Malt is the flavor in delights like Whoppers and Ovaltine and malted milk shakes. This flavoring is derived from malted, or sprouted, grains. Malted grains have been used since ancient times in beer brewering, whiskey, and cooking.

I recently re-discovered barley malt extract as an ingredient in breadmaking. I had to learn about the different ways I can currently get malt flavor and benefits into my cooking and I am sharing what I learned!

Malt syrup (or “extract”, made from barley) 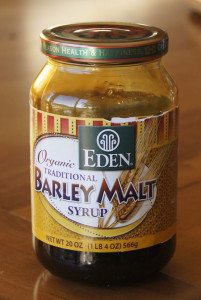 Common malt syrup is made from sprouted barley. (Other grains can also be malted.) Malt syrup adds color and flavor and shelf life when used in baked goods, especially yeast breads. You might find it in a local supermarket or homebrew supply, or you can purchase it online from King Arthur Flour. Malt syrup is very sticky and thick. I find it a lot easier to weigh out an amount of malt syrup than to use a measuring spoon: 1 tablespoon = 21 grams.

You can read more about malt syrup in my post, Blue Ribbon Malt Extract cookbook.

Malt powder is a dried version of malt syrup. It is definitely an easier product to use than malt syrup! I don’t think it adds the same color to a recipe as the syrup, nor does it give an extra moistness to a loaf of bread. I use it in bagel boiling liquid and sometimes in the bagels themselves.

“Diastatic” means that the product contains active enzymes. The malting/sprouting process of barley develops several different enzymes that break starches into simple, fermentable sugars. The malting process can be halted at different times, leading to different ratios of enzyme to sugars in the resultant malts. The activity of these enzymes can be measured and is called the diastatic power.

Brewers usually want a diastatic malt and the higher the diastatic power the better (usually).

Diastatic malt powder is good for bread making. It helps the bread rise because it adds active enzymes (trust me! I’ve tried it!), improves the texture, lends a subtle rich flavor, and gives loaves a browner crust. It’s available as diastatic malt powder from King Arthur Flour. The company does not specify the diastatic power of their preparations.

The malt syrup on the King Arthur site is touted for improved bread flavor and shelf life. They do not specify if the syrup is diastatic or non-diastatic.

Non-diastic malt powder is also available from King Arthur Flour. This is a malt without active enzymes. They suggest to use it in bagels, both in the dough and in the boiling water. 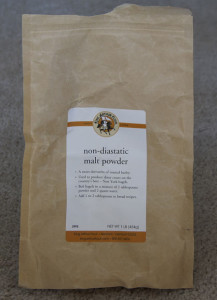