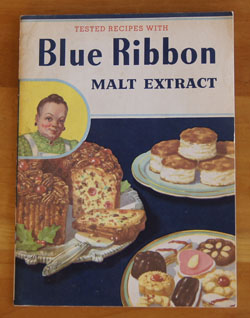 How did this booklet get into my collection? I am clueless. I just wrote a couple posts about bagels and touched on the ingredient “malt syrup” – so not surprisingly, Blue Ribbon Malt Extract caught my eye when I searched for a book to cover this week.

What is malt syrup? I found online that malt syrup is (generally) made from barley. The barley is soaked in water just until it sprouts and then it is dried – a process called malting. The sprouting process develops several different enzymes that break starches into sugars.  Malt syrup is mostly the sugar maltose, along with complex carbohydrates and a bit of protein (and some vitamins, see below). It’s about half as sweet as sugar.

“Blue Ribbon Malt Extract is a valuable addtion to the diet, and a delightful means of bringing new taste to everyday cooking. Its use in bread, for instance, will decrease the leavening time, and produce a larger, lighter loaf of better texture, deeper crust, and more appetizing appearance. Bread and other goods baked with Blue Ribbon Malt Extract will also keep their freshness and tastiness much longer.”

Except for bagels, I’ve rarely seen malt syrup called for in breads. And, I don’t remember malt syrup being touted as a health food supplement. But sure enough, wikipedia states that it was used as a nutrition enhancer for children in England in the first half of the twentieth century. It tastes better than cod liver oil (given for the same purpose) but it tastes a lot better. A tablespoon serving has 10% RDA niacin, 6% vitamin B6, and 6% riboflavin (source: WolfAlph). (In The House at Pooh Corner, malt syrup was Tigger’s favorite food!)

In all the recipes in this book, only a small amount of malt syrup is called for, like teaspoons and tablespoons. Please carefully study the photo below, taken from this cookbook, of a can of Blue Ribbon Malt Syrup: 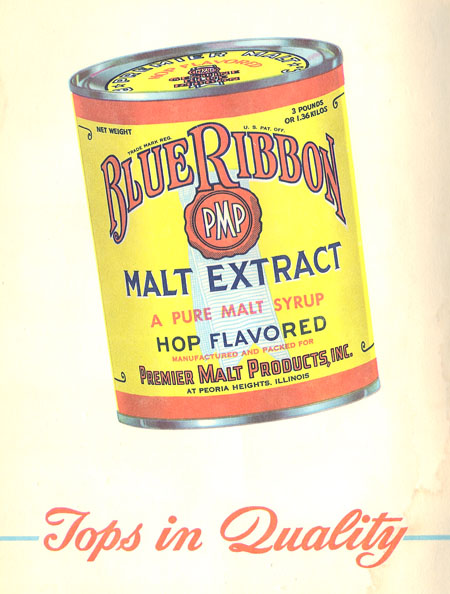 3 pounds of malt syrup in a can! Now, that’s a lot when you use so little for each recipe or for nutrition! What did people do with all that malt syrup?

Beer. The answer is beer. I figured this out by googling “malt syrup” and finding almost all of the hits leading to homebrewing sites. I also liked the following, a current review of this book on Amazon:

“If you wrote to the Blue Ribbon company [in the 1950s] and asked for recipes, they would send you this [book] . . . wonder of wonders, a few weeks later you would get a letter. The envelope had no return address. You opened it up, and there was a single typed sheet with home brew recipes. That was what you really wanted. You could then happily brew to your heart’s content.”

During prohibition, people used malt extract in their recipes for homebrew. Note that this book was published in 1951, decades after prohibition was repealed: homebrewing was still illegal in the US until 1978. The company that produced Blue Ribbon Malt Extract had to keep a low profile. (Modern Pabst Blue Ribbon beer is connected with Blue Ribbon malt extract. If you want to read more: Premier Malt Products and Pabst Blue Ribbon.)

Back to my cookbook, Blue Ribbon Malt Extract. I decided to make Bran Muffins for this blog post. 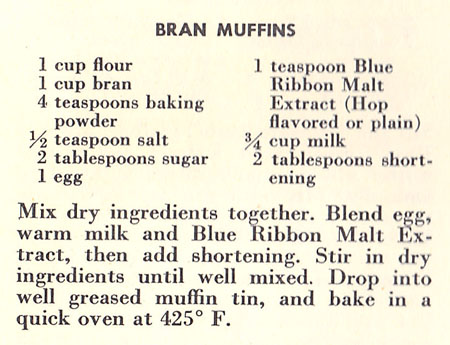 I searched local stores and found malt syrup at Whole Foods (but nowhere else): Mix the flour, bran, paking powder, and salt and stir together. Blend the sugar, egg, malt syrup, milk, and oil and whisk until well mixed. Combine the wet and dry ingredients just until mixed. 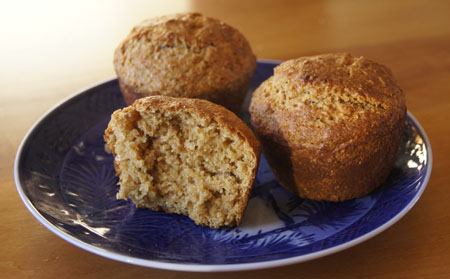 The original recipe said to drop into “a well greased muffin tin”. I assume that means 12 muffins, but as I filled the muffin cups, I decided that 8 muffins was the proper amount. No time was specified; I tried 20 minutes and I think it was a little too long. I incorporated these changes in my version of this recipe, above.

And how did these taste? I broke one open right out of the oven and devoured it. The fragrence and taste of the malt syrup was subtle but definitely there. I found these to be really filling. I ate one before a workout and believe they gave me lots of energy! I really enjoyed these muffins.

But my husband? “They taste like sawdust.” Sigh. You will have to judge them for yourself.