Bulgur is a wheat product, made either from durum wheat or from a mixture of several different species of wheat. It is sometimes spelled burghul, burghul, or bhulghur. Bulgur is classified as a “whole grain” because it contains the endosperm, germ, and bran. It is one of the “ancient grains” – grains haven’t been selectively bred and have changed little for thousands of years.

I don’t think burghol is bulgur, but I’ll get to that in a later post when I study cracked wheat.

To make bulgur, hulled wheat kernels, called groats, are cracked and parboiled (steamed), then milled into different grinds, from fine particles to coarse particles (number 1 is fine, number 4 is coarse). I’ve found bulgur in many local stores, both in bulk and packaged. I think the packages I’ve found do not denote the grind, but I am going to pay more attention next time I look for it.

Bulgur is common in Middle Eastern cuisines. It can be used as a cereal, in soups, and as a substitute for rice or pasta. Cooked, it is fluffier than farro (an intact grain) or freekeh (a cracked grain), both of which are not parboiled.

Looking through my own cookbooks, I find many that have bulgur recipes. None before the 1970s, though, and mostly in “natural food” type cookbooks. It became popular with the hippie vegetarian movement because it is a whole grain with a good amount of protein. 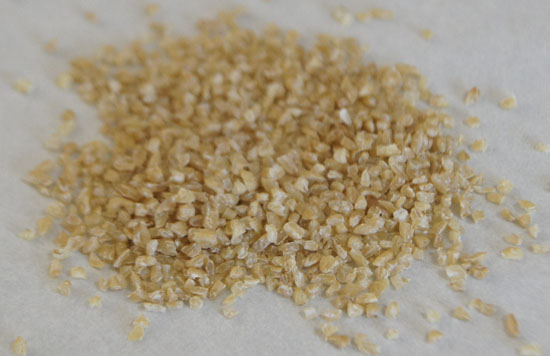 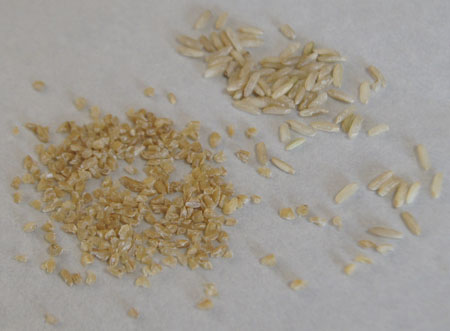 Online sources report the glycemic index of bulgur as from 46-48, making bulgur a medium GI food. (Anything under 55 is pretty good for a grain.)

Ordinary Vegan likes bulgur for people on a diet. They compared it to quinoa: cooked bulgur has half the calories per cup as does cooked quinoa, so calorie-counting dieters get to eat more of it. If you eat the same number of calories of quinoa and bulgur, you get the same amount of protein. They also claim that bulgur has more fiber than quinoa, and that bulgur has a resistant starch that is especially good for keeping us feeling full.

Food Network’s Healthy Eats has a page on “meet this grain” for another discussion of the nutrition and uses of bulgur.

Nutrition Value has more nutritional information for bulgur. Nutrition Value is a great database. It gives vitamins, minerals, proteins and amino acids, fats and fatty acids, carbohydrate values, and more miscellaneous information for many foods. You can search by a specific food, mineral, macronutrient, or amino acid, or search by food category. (It does not give the glycemic index.) I also like WolfAlph as a resource for nutrition values.

I wasn’t sure how long to cook the bulgur, since I did not have the package, so I had to look it up online. As it cooked, I checked it after about 10 minutes and decided it was too dry, so I added more water. I did this one more time during the cooking. I checked for doneness at 20 minutes, and stopped cooking at 22 minutes. Draining was not necessary. I did leave it covered, off burner, for about 5 minutes before opening the pan and letting the cooked bulgur cool.

1 cup dry cooked to 4 cups cooked! It really is amazing. You can eat a larger volume for the same amount of calories as some of the other grains.

I did not know the coarseness, or “grind”, of my bulgur, since I had bought it in bulk or taken it out of the package to store in another container. Different grinds (they are 1-4 with 1 being the finest) might have different cooking times, so if you buy bulgur in a package, consult the package for cooking time. 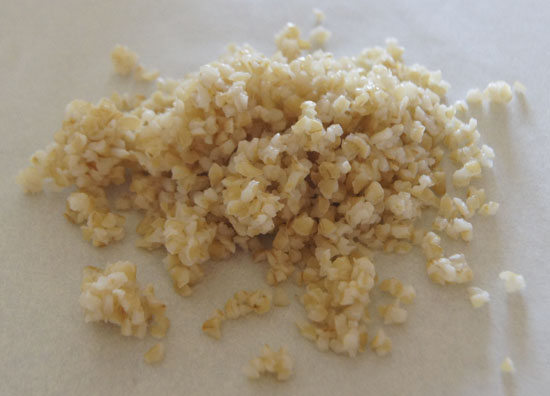 Probably the most famous bulgur dish is tabbouleh, a salad made of bulgur, tomatoes, onion, mint, parsley, olive oil, and lemon. I make variations of this type of grain dish a lot, using different types of grains – it makes a great lunch bowl, and a great side salad for those who like grainy dishes. Sometimes I add nuts or spinach or kale or cooked chicken or fish. But almost always, I add feta cheese, if I have some around! And at least one fresh herb – it seems to me to be a necessity for this dish.

Bulgur, cooked, can be added to bread dough.

Epicurious has a recipe for bulgur with herbs that includes toasted almonds.

Any sort of chopped vegetable, including cucumbers, and garbanzo beans are good additions to bulgur bowls.