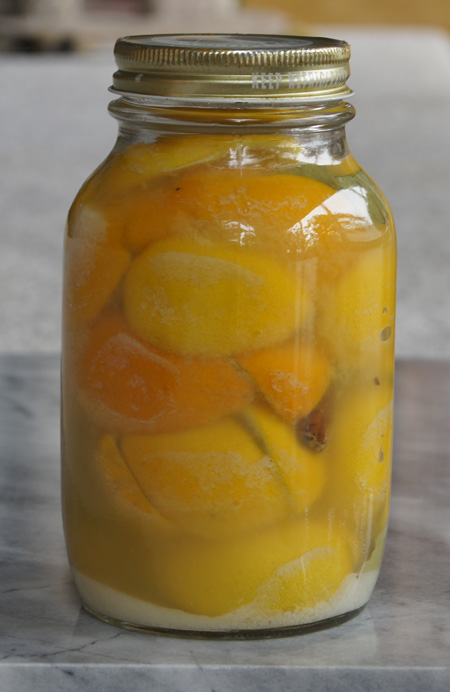 My Chicken Tagine calls for Preserved Lemons. They are really easy to make and keep at room temperature for a year. And they look pretty!

I took a Mediterranean Cooking Workshop at the Culinary School of the Rockies (now Escoffier). That’s where I got the recipe below. They in turn credit Joanne Weir’s book, From Tapas to Meze, and her recipe can be found online. I am re-writing this in my own words.

Take each lemon and cut from the top to within one-half inch of the bottom, then do again, so that you are have four pieces still joined at the bottom. (This is the traditional way of making preserved lemons.)

Place a tablespoon of the salt in the bottom of a very clean 1-quart canning jar. Pick up each cut lemon, sprinkle the inside with a generous amount of salt, then put it in the jar. Continue sprinkling with salt and packing the lemons into the jar. After you have a few lemons in the jar, add the cinnamon sticks and bay leaves, tucking them between the lemons.

Pack as many lemons as possible in the jar. The juice should squish out and fill all the spaces. If the jar is packed with lemons but the juice isn’t at the top, add some fresh lemon juice so that the juice level is almost to the top of the jar.

Cap the jar with a lid. This recipe does not call for sterilization of the jar or the cap or the preserved lemons.

Store the jar at least 3 weeks before you use the preserved lemons. They do not need to be refrigerated and keep a year at room temperature, according to the original author of this recipe.

Remove a lemon from the brine and discard the pulp, so that you are left only with the peel. Rinse the peel before use. Chop into fine dice and use in tagines, salads, or anything that calls for lemon zest. 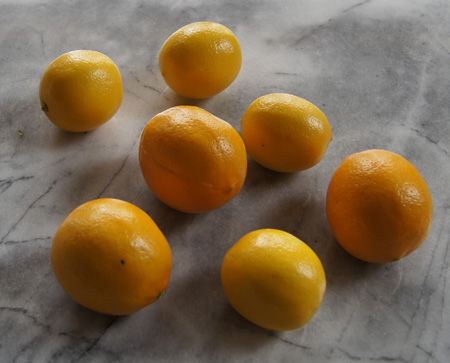