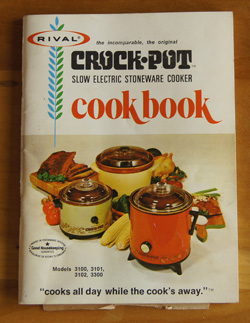 This small pamphlet is the original instruction book that came with my mother’s first Crock-Pot. My guess is that it was published about 1972, based on the research I did on Crock-Pots for my Electric Slow Cooker Cookbook post on slow cooker apple butter. Rival Crock-Pots were first introduced to the American public in the early 1970s.

I enjoy this passage entitled “A note from our Rival Home Economist”, on the inside cover of the booklet:

“In all my years of experience I have never enjoyed such interesting and rewarding months as those spent testing this revolutionary slow cooker!

All of us are mighty interested in nutrition, flavor and economy. Well, you’ll certainly get the best of all three with your Rival “Crock-Pot.” Better flavor than you could ever get by boiling or frying. Slow “Crock-Pot” cooking is an excellent way to retain more vitamins, juices and minerals. You’ll be thrilled at the tender, tasty meals you can serve, using less expensive meats. “Crock-Pot” cooks all day for about 3 cents. What better way to conserve electricity – and save food money, too!

Forget about watching meals as they cook. Forget about that little question: “Will everything and everybody be ready at the same time?” Enjoy yourself while your “Crock-Pot” turns out perfect meals – unattended. Imagine this: during tests I actually simmered chicken and vegetables continuously for 30 hours – of course, far longer than necessary – yet they were still intact and actually good.

You will love having the “Crock-Pot” in your kitchen. It promises to be quite a change from what you’re used to. For enjoyment at its best, as a starter, may I suggest pot roast or Swiss steak. Just don’t be afraid to leave it alone for 10 hours. With the “Crock-Pot” in the kitchen, you don’t have to be there.

The recipes in this book represent the many categories of foods you can prepare with ease and confidence. Because the “Crock-Pot” is so versatile, you’ll want to adapt some of your own favorite recipes. I’ve prepared a guide to make things simpler for you.

Have fun cooking with your “Crock-Pot” Slow Cooker! For whatever you use it, it will save you time and give you better flavor.”

The whole pamphlet is written in this friendly style: it was fun to read! When I first retrieved it from my bookshelf, I thought I’d try a recipe and then recycle it, but in the end I decided it was interesting, friendly, nostalgic, and useful enough to keep. It has a still-useful guide for adapting your current recipes to slow-cooker versions, and several interesting recipes. My mother made notes on the Boeuf Bourguignon recipe, Coq au Vin, and Pot Roast of Beef recipes. Currently, my “go-to” cookbook for slow-cooking is Cover and Bake (from Cooks Illustrated); I will tuck this little cookbook-pamphlet inside that book and enjoy it again.

I decided to try “Boeuf a la Flamade”, or “Beer Braised Beef. Briefly, a beef stew. And I have been making beef stews for years, sometimes on the stove top, sometimes in a covered casserole, sometimes in a slow cooker. I generally brown the meat first, to add flavor. This recipe does not call for a browning step. What the heck, it’s worth a try, and saves time and a messy pan. I like the inclusion of bacon and beer: how can you go wrong with that combination? 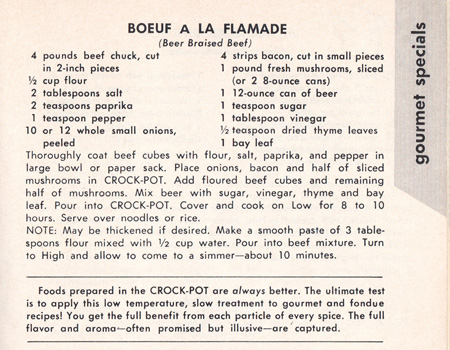 I think that a pound of mushrooms is overkill, so I will use only the 8-ounce package that I have in the refrigerator. I like to use a cross-rib roast for stew meat, and the one I bought is only 3 pounds, so my version of the recipe reflects this change. I’ll use less salt, too.

Mix the flour, salt, paprika, and pepper in a bowl and roll the beef cubes in it until they are all well-covered. Put the onions, bacon, and half of the mushrooms in your slow-cooker, then add the floured beef cubes. (I added the floured cubes and also the rest of the flour mixture because we like our stews thick.) Add the rest of the mushrooms. Mix the beer with the sugar and vinegar and add to the pot. Add the thyme and bay leaf.

Cover and cook on low for 7-9 hours. Check at 7 hours because it will probably be done.

*An easy way to peel small onions is to put them in boiling water for three minutes, then drain and rinse with cold water. Cut off the ends and the peel will pop right off.

I set my slow cooker to “low” and checked it at 7 1/2 hours and it was done: the meat was tender,  the gravy thick, and it was starting to stick to the pot. Perhaps today’s slow cookers have a different low setting, or maybe it’s just mine. Anyway, I suggest checking the stew after it has cooked 7 hours on low. 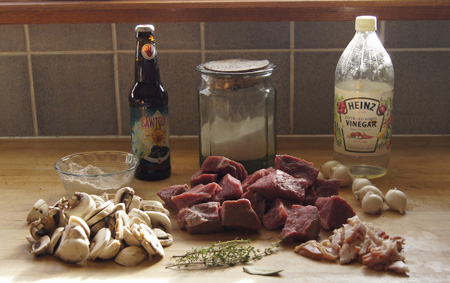 And here is the stew: 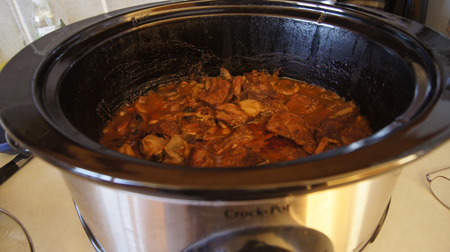 This turned out great, and I will make it again. The bacon gives it a flavor reminiscent of “little piggies”, a dish I make from round steak slices rolled around pieces of bacon. I like this recipe because it does not include carrots and potatoes, vegetables that in my opinion get overcooked in the slow cooker. To save calories, you could fry the bacon first and pour off the fat before combining with the meat. I served it over mashed potatoes; it would also work great over rice or noodles. This recipe made enough for two meals for the two of us; I froze half for a quick and yummy meal sometime in the future weeks.

Below is a scan of the back cover of this small cookbook. I like it because it shows my first crock pot in the upper left photo, the exact same color and size. Also note the phrase “makers of Click ‘n Clean CAN-O-MATICS”. 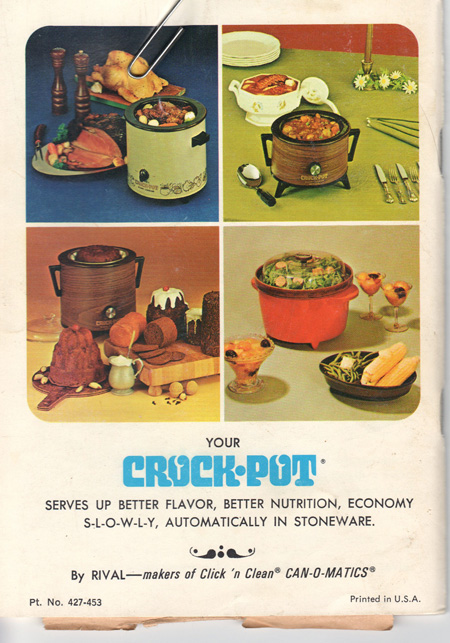