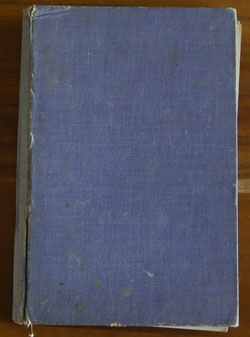 I pull a small book out of my “old book section”. Curiously, the cover and spine are blank. The cover is blue cloth over cardboard, like the clip-binders we used in junior high. I open to the first page: 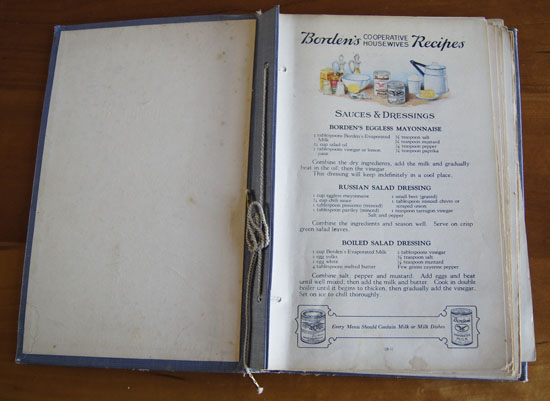 As you can see, the pages are held in with a string tie. The front of each double-sided page is headed with “Borden’s Cooperative Housewives Recipes” and a color illustration. Several recipes follow, and then the bottom of the page has a can of Borden condensed milk on the left, a can of Borden’s evaporated milk on the left, and a saying, like “Every Menu Should Contain Milk or Milk Dishes”.

Note the white with blue trim double boiler in the illlustration? To this day, I have one of these vintage double boilers on a shelf in my basement.

A couple other pages: 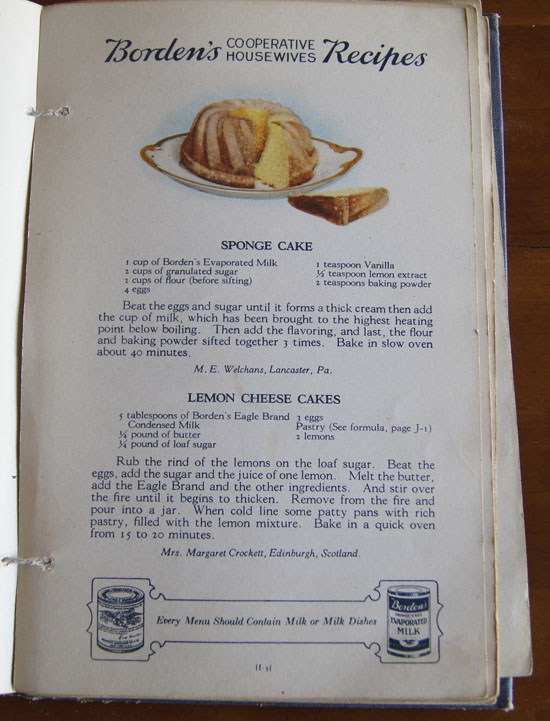 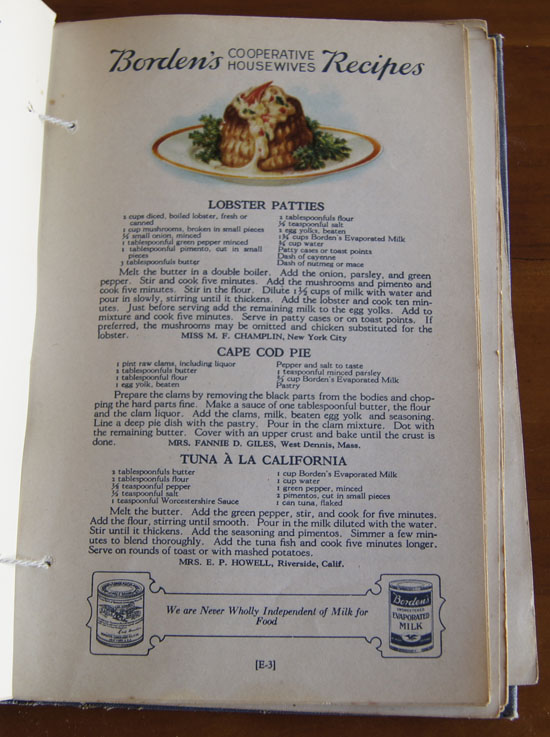 The last page of this book invites members to submit the name and address of friends to send to the Recipe Club: 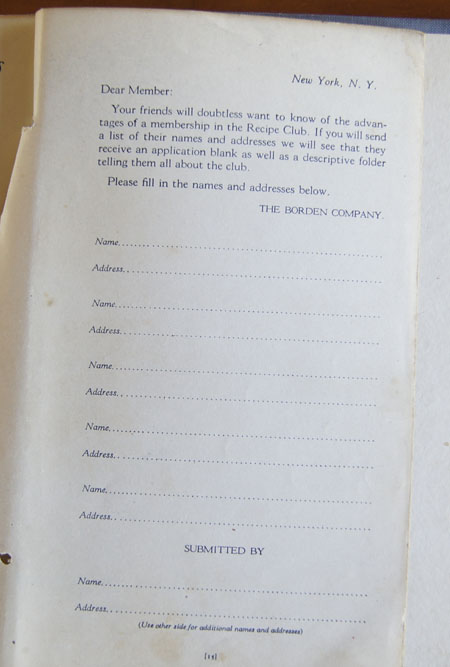 I am pretty sure this book belonged to my maternal grandmother – she would have been a young mother at the time. There is some handwriting on the back page of the book that looks like hers. So I am almost positive it was her fingers that tied the bow in the string that keeps these pages together. I remember that she could tie perfect bows and that she made her own hats. Mother and I could never tie a good bow.

I deduce that Grandma belonged to a “Recipe Club” sponsored by the Borden Company. Probably the company sent her pages on a regular basis, and she would add each page to the book. The pages are numbered with a letter and number, like “B-1”, “E-3”, “G-2”, etc.

There is no publication date in this book. I hit the internet to dig up some information. Michigan State University Libraries (MSU) has this entry for a book on their shelves:

The above dimensions match my book. The cover photo is almost the same: 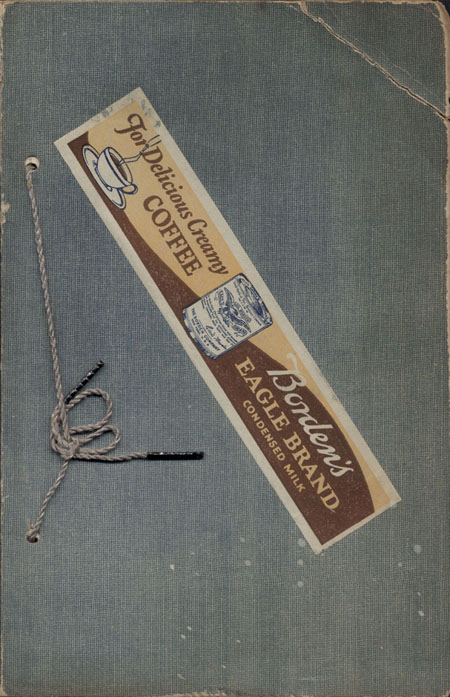 The sticker on the MSU copy reads, “For delicious creamy coffee: Borden’s Eagle Brand Condensed Milk.” Perhaps the sticker on my copy fell off?

The book at MSU is part of the The Alan and Shirley Brocker Sliker Collection, housed with the library’s special collections. And, the entire book is available digitally on their website. Copyright permission is granted, so I feel free to share with you photos and scans of this very old book.

I find one more internet entry pertinent to my Borden’s Cooperative Housewives Recipes on the etsy.com site. A copy of a book that looks like mine was sold through the etsy site – they have photos of the cover and some of the pages. The description reads: “Way back when, Borden’s Evaporated Milk sponsored a recipe club. Each member received recipe installments, and these pages were inserted into a string binding by the Housewife”. They list the publication date as “circa 1920’s”. The pages in my book are in a different order than in either of the copies I viewed online (not surprising) but some are the same.

Gail Borden founded the Borden Company to produce evaporated milk in 1857. The company prospered during the Civil War by selling condensed milk to Union armies. In 1899, the name changed to the Borden Condensed Milk Company, and it became the Borden Company in 1919. It prospered for decades until it suffered significant losses in 1991-1993. In 1997, employees of Borden’s formed “Eagle Family Foods Inc.”, producing Eagle Brand Sweetened Condensed Milk (now a division of Smucker’s). The brand has been bought and sold several times by this point in time (2017).

History of evaporated and condensed milk

Canned evaporated milk was introduced to the American public in 1853 by Gail Borden. The wikipedia version of the story says that on a return trip from England, Borden was devastated by the deaths of several children who drank poor milk from shipboard cows. At that time, fresh milk could only be stored for a few hours before it spoiled – I think that’s why the cows were onboard. Anyway, Borden was inspired to find a way to store milk for long periods at room temperature. He applied a vacuum to fresh milk to pull off a lot of the water, leaving what he called “evaporated milk”.

How did he do this, this chemist asks? A “vacuum” is produced when the atmosphere (air) is removed from a sealed chamber. A vacuum chamber has a lower atmospheric pressure – and at lower pressure, a liquid boils at a lower temperature. In the case of milk, lowering the boiling point of the liquid (mostly water) causes the water to depart the system and leaves the other components of the milk unscathed (because they are not exposed to high temperature). (Rember the old PV=nRT equation you learned in school, where P is pressure and T is temperature? Lower the pressure, lower the boiling temperature. Note that in a pressure cooker the opposite happens: the pressure in increased, and the water boils at a higher temperature.) “Evaporated milk” is stable at room temperature, and when canned will last a long time on a pantry shelf.

How was the vacuum produced in 1857? On wikipedia, I find that methods for producing a vacuum in a chamber were discovered by the 13th century. By the 1800s, several types of vacuum pumps were in use. Borden was impressed and inspired by the vacuum method used by the Shakers to remove water from fruit juices. Likely it was a mechanical pump like the first photo on this page, but I could not find out for sure. 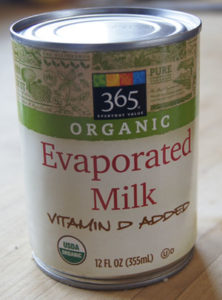 Each recipe in Borden’s Cooperative Housewives Recipes has evaporated or condensed milk as an ingredient. I know that “evaporated” milk is still sold as “evaporated milk” in a can so labeled. But what is “condensed” milk in today’s lingo? I know that “sweetened condensed milk”, a sugar-sweetened form of evaporated milk, is readily available, but is it the same as “condensed milk”? I need to know this before I cook a recipe calling for this ingredient in Borden’s Cooperative Housewives Recipes.

I do want to note that canned evaporated milk is still often used in cooking, in spite of the readily available fresh milks of today. In some recipes, it works better than fresh milk. I’ve tried fresh milk in pumpkin pie and the pies do not bake up as well as when made with evaporated milk. According to allrecipes.com, canned milk is “the cornerstone of many puddings, including flan, frosting and fudge. Pumpkin pie wouldn’t exist without it”. Canned sweetened condensed milk is a very thick, sweet product that lasts for years in my pantry and I keep it on hand for decadent desserts.

Okay, I feel read to cook a recipe from this book!

I decide to try “Sponge Cake”.

The photo of this cake (one of the photos earlier in this blog) show that it was baked in a bundt pan. I decide not to heat the evaporated milk to just below boiling (this is an unusual step in cake-baking). I guessed a slow oven to be 350˚ F.

Well, I made the cake, and took it out of the oven after 40 minutes. This is how it looked: 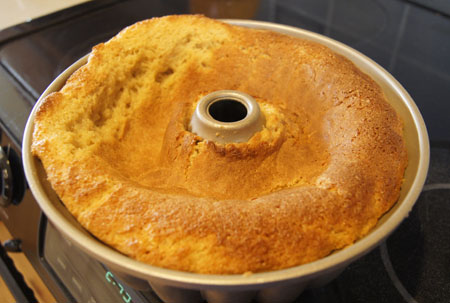 I was so disappointed! This is my planned dessert, and we had company. I showed it to my husband and he sympathized with me.

Then I waited 10 minutes for the cake to cool. I inverted it onto a cooling rack and carefully urged it out of the pan. Lo and behold! 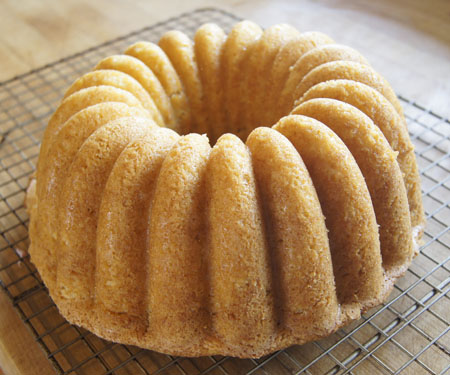 Why did the cake fall? I suspect the oven temperature. After the fact, I found from Wikipedia that a “slow oven” is 300-325˚ F. Or maybe the step that I skipped – heating the evaporated milk – is important for the outcome of the cake.

I served slices of this cake with sliced, lightly sugared strawberries and whipped cream. I thought the “crumb” of this cake was a little dense, but everyone else simply loved this dessert! If I try a sponge cake again, though, I will compare and contrast with modern recipes for this type of cake.