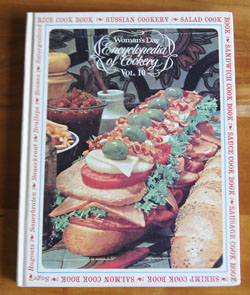 I have a set of twelve Encyclopedia of Cookery volumes and this is the tenth of that set – I covered the first nine in previous posts. I’ve enjoyed all of them so far! This volume covers curious and helpful information about foods from (q)uail to (sor)rel.

I settle in to page through this book. A “quail is” a small gallinaceous game bird. Now that’s a word I don’t know! I find that “gallinaceous” refers to to birds of the order Galliformes, “an order of heavy-bodied ground-feeding birds that includes turkey, grouse, chicken, New World quail and Old World quail, ptarmigan, partridge, pheasant, junglefowl and the Cracidae.” I’ve never seen a quail in a store (nor have I looked for one), but in 1966 here is their availability:

“Quantity cooking” is covered in about ten pages of handy hints, instructions, and recipes. Largely it is for homecooks who need to cook for community events, family gatherings, and bake sales. “Quenelles” are fish dumplings (I made these once, years ago). “Quiche” is “a savory baked custard tart thought to have originated in Lorraine, a province of eastern France bordering on Germany”. The word quiche derives from a word from a French-German dialect that means kuchen, or “cake” (and I have a longing for a kuchen I once had). Mother labelled as “delicious” the recipe for “Quiche Lorraine with Swiss Cheese”. 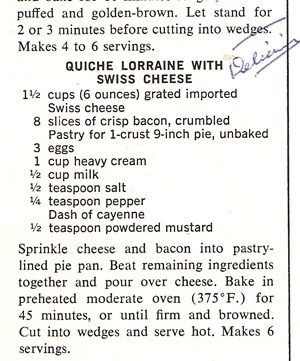 Rabbit, raccoon, radish, rampion (a bellflower used for its edibible root and tender young leaves). “Ratatouille” is a stew or casserole that includes eggplant, zucchini, and green pepper. A “Recipe” is: “a formula for preparing a dish. In old-fashioned usage the words ‘receipt’ or ‘rule’ were often used to mean the same thing.” Aha, back to formulas and chemistry. “Reindeer”! I hope I never have to cook one, but at least now I have a recipe.

Next is an extensive rice cookbook, with a lot of discussion about preferred ways to cook rice. I like several of the recipes in the cookbook: “Rice and Pork Casserole”, “Ham and Cheese Rice Bake”, “Bok Youguy” (chicken, rice, raisins, peanuts, coconut), “Mexican Rice and Yellow Rice”, and “Ham Jambalaya”. “Rock Cornish Hens, or Cornish Game Hens” are defined as a fowl species bred from the Cornish hen and a pea comb. Today it is defined as a hybrid chicken sold whole. I could try the “Rock Cornish Hen” recipe including pecan stuffing.

Romaine is also called “Cos” lettuce. A “Russian Cook Book” offers recipes for fare such as Selyodka (herrings), Ikra Iz Baklazhanov (eggplant caviar), Borsch, and Vatrushki (a cheese and egg tart). “Rye” is a cereal grass and rye flour is used in malt liquors, gin and Kvall (a Russian drink), as well as the rye breads that I know and love. “Saffron” is a spice made from the stigmas of the flowers of a small crocus. I bought some saffron on our trip to Turkey and discuss it in this post on my other blog. “Sago” is a starch made from the sago palm, and is a common food in the southwest Pacific. I peruse the “Salad Cook Book” with recipes for fresh lettuce and vegetable salads through fruit and molded salads.

“Salamander”! I read the paragraph under this heading, expecting to learn how to skin and cook this reptile. But no, in culinary language a “salamander” is a kitchen tool used for browning the tops of foods. One version was a long rod, flattened at one end, that was set in the fire and then waved close over the food. It has been replaced by the modern kitchen oven broiler.

“Sally Lunn” is a “bread of English origin which has become a culinary specialty of our southern states”. It’s an egg and milk yeast bread cooked in a Turk’s head mold or in muffin cups – a Turk’s head mold is similar to today’s bundt pans. According to the Encyclopedia of Cookery, “the story most often told to account for the name is that the bread was invented and sold by a girl named Sally Lunn in the city of Bath, in England, around 1700”. (I found this article online about the history of Sally Lunn bread.)

A “salmagundi” is a culinary term for “hotchpotch”, and is the name of a stew or salad dish made from leftover meats and vinegar and pickles. Salmagundi, what a neat word. “Salmon” claims a lengthy section. “Salsify” is another name for oyster plant. Salt is NaCl. (Formulas again.)

“Sandwiches” is a 14-page section including lots recipes and lots of color photos. A huge section for the lowly sandwich! Mother liked the Sloppy Joes: 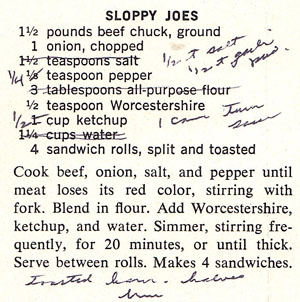 I like a few of the recipes in this section, but like salads, I usually make sandwiches “on the go”, or from ideas picked up from restaurants. Many of the sandwich recipes in this book employ sandwich fillings (kind of like our current-day tuna and chicken salads) that employ a variety of ingredients, including  sardines, chopped liver, tongue, or eggs. I might make the “Ham Salad Rolls” 1604, with diced cooked ham, cabbage, celery, green pepper, egg, mustard, and salad dressing on a hot dog roll. There are also recipes for a variety of hot, cold, and open-faced sandwiches.

Sardine, sarsaparilla, sassafras. James A. Beard wrote a section on the classic sauces, and Helen Evans Brown wrote a cook book on “How to Cook Superbly: The Basic Sauces, Brown and White”. 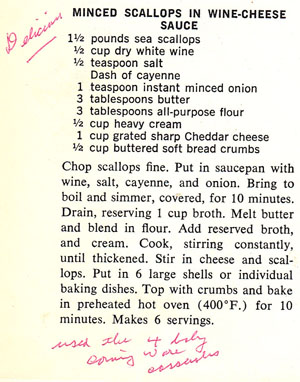 “Scones” originated in Scotland. “Scrapple”, an invention of the thrifty Pennsylvania Dutch farmers, is a solid mush made from the by-products of hog butchering. “Seafood” has only a couple paragraphs and just two recipes. “Seaweed” is granted a long two-column essay written by Lucy Kavaler. “Seltzer water” is: “a mineral water containing a great deal of carbon dioxide. It comes from Nieder Selters in the Wiesbaden district of Germany. The name is also now widely used to describe an artificially prepared bottled water of similar composition”.

Semonila, sesame, shad, shallot. “Shellfish” includes a handful of recipes, as does “sherbet”. “Shortcake” is a thick cookie made with flour, sugar, sometimes eggs, and a proportionally large amount of butter or other shortening. “Shrimp” has a cook book; “sloe” is the fruit of the blackthorn, and is used to make sloe gin. “Smorgasbord” includes recipes for Swedish and American styles of this informal type of food service. Snail, snap bean. A “Snowball” is a round cookie, often rolled in powdered sugar – and I love these! I am tempted to try the recipe for “Coconut Cookie Snowballs” 1668.

All these recipes, now what to make for this blog? So many options! I choose to make “Sally Lunn Bread”. This is basically a no-knead yeast batter bread that includes eggs, sugar, and shortening, kind of like brioche dough: 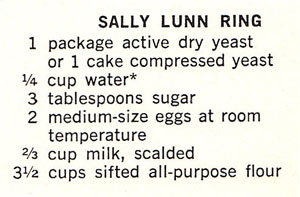 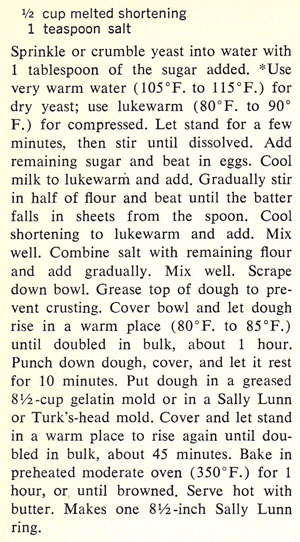 Instead of the shortening in the above recipe, I’d like to use butter (I consider it a more-natural fat than shortening). Also, I would like to have a bit more modern recipe, since I want to make a smaller loaf and cook it in a loaf pan instead of a bundt pan. I found this recipe on the Smitten Kitchen website:

This recipe is real similar to the Encyclopedia of Cooking recipe, but uses butter. Water is eliminated, but the water in the Encyclopedia recipe was used only to dissolve yeast, a step we can bypass today, since the Smitten Kitchen recipe is written for today’s yeast, and yeast is a critical factor in breadmaking. Below is my version, adapted from the Smitten Kitchen recipe.

Scrape down the dough in the bowl and cover the top with plastic wrap. Let rise for one hour or until doubled. (It’s hard to tell when it’s doubled; if it leaves an imprint when poked, it’s ready.)

Butter and flour a 9×5-inch loaf pan. Scrape the dough into the pan. Let rise 30 minutes.

Below is the dough just after mixing, before rising. This is a wet, sticky dough. 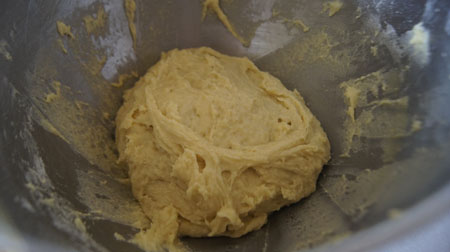 After the second rise, the dough is not quite to the top of the loaf pan. I let it rise in the pan for 40 minutes because I wanted it higher. Still, I went ahead and put it in the oven. 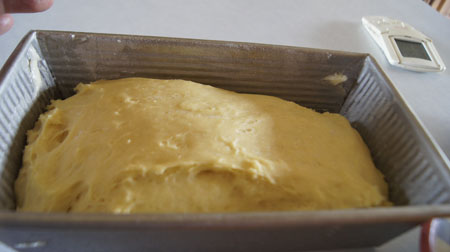 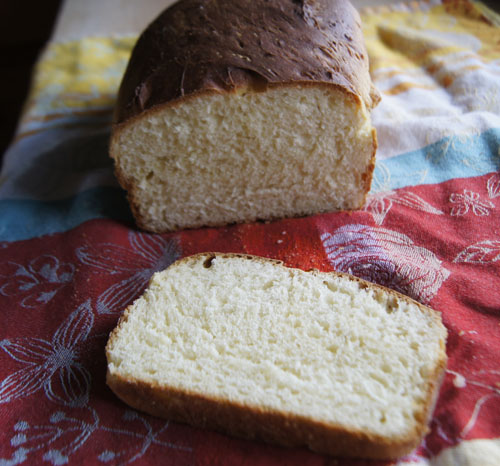 This Sally Lunn bread is rich with eggs, milk, and butter, but not too sweet with sugar. The flavor is reminiscent of a brioche. The “crumb” is between a yeast bread and cake in texture. I served it with a dollop of ice cream and a lot of fresh raspberries for dessert. The next day(s), it was great toasted with jam for breakfast. Yay for Sally Lunn!