Sorghum – I always associate the word “sorghum” with syrup. In my cookbook Our Favorite Recipes, the pfefferneusse cookie recipe calls for 4 pounds of sorghum syrup (I did not try to find it!). I listed sorghum as an entry in Encyclopedia of Cookery, Vol. 10, but did not describe it. So I am going to pull that book off the shelf . . .

“A genus of grasses with a large number of species, cultivated throughout the world for food, forage, and syrup. Sorghums were among the first of the wild plants to be domesticated by man. They originated in Africa and Asia; Egyptian cultivation can be dated before 2200 BC and they were grown in China and India at an early date.”

I was correct in associating sorghum with syrup. So why am I now holding this Bob’s Red Mill Sorghum package of big kernels of sorghum grain – ready to be cooked like a grain and intended for human consumption? Because I am re-discovering some of the grains we humans ate as we developed into the beings we are today. Sorghum is one of these “ancient grains”. Bob’s Red Mill has gone before me, and now produces sorghum grain in these convenient packages for people like me: 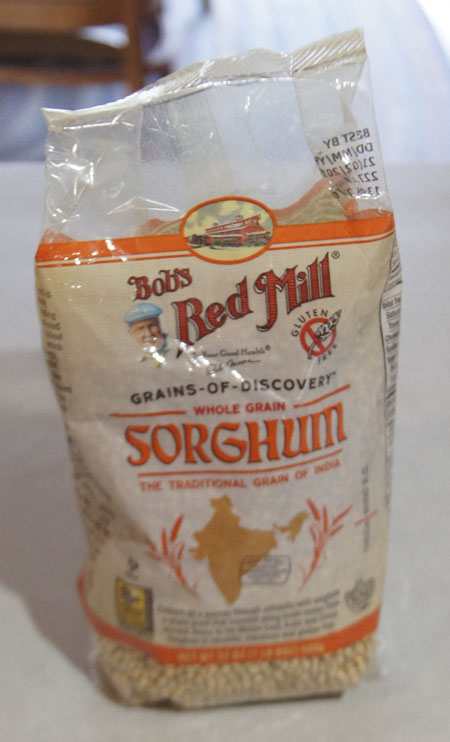 I found a great reference for sorghum in an article on the Oldways Whole Grains Council website. I learn that sorghum is known by many names: milo and guinea corn in West Africa, kaﬁr corn in South Africa, dura in Sudan, mtama in eastern Africa, jowar in Hindi, jola in Kannada, and kaoliang in China. Sorghum has an edible hull, and thus is common in whole grain form, retaining most of its nutrients.

I learn on the All About Sorghum site that “In the United States, and other countries across the globe, sorghum grain is primarily used for livestock feed and ethanol production, but is becoming popular in the consumer food industry and other emerging markets.” From the same site: “In 2017, sorghum was planted on 5.6 million acres and 364 million bushels were harvested.”

Another great reference is the Simply Sorghum site. I learn that sorghum is available as the whole grain (this is what I have), pearled grain (outer husk removed), whole grain sorghum flour (milled with the hull), white sorghum flour (milled without the hull), sorghum bran and flakes (used most often in the food industry), and sorghum syrup. Sorghum syrup is still used as a sweetener, mostly in the South. For instance, it is used on pancakes and added to BBQ marinades and salad dressings. Sorghum syrup is less sweet than molasses and sugar because it lower in fructose. Benefits are that it is high in potassium. The Simply Sorghum site lists another sorghum product called “black sorghum”. Black sorghum was developed by Texas A&M University in the US. This is emerging as a “super food” as it is high in antioxidants and phytochemicals.

Sorghum can be popped like popcorn! I just had to try doing this. I put it in a pan with a bit of oil and put it over high heat. A lid was not necessary, since the little kernels did not have enough oomph to jump out of the pan. 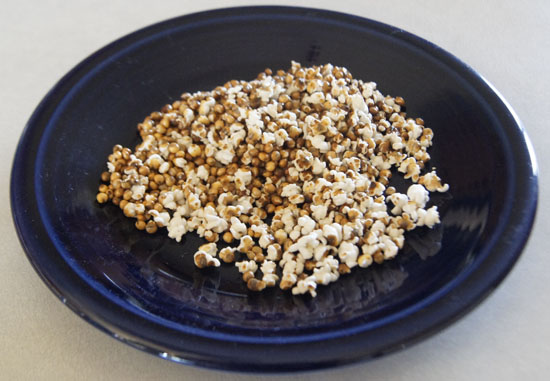 Sorghum is one of the ancient grains. Most of the grain-sorghum that we find in stores in the US is whole grain (the hull is edible) but hulled or “pearl” sorghum is also available. Curious about the the availability of sorghum, I checked around and found Vitacost to have the widest variety of sorghum grains and flours (they even have sprouted grain sorghum flour) and popped sorghum snacks.

A major “plus” for sorghum is that it is gluten free. This puts it with amaranth, fonio,and quinoa (and a few more more) as acceptable grains/pseudocereals for the thousands of people with celiac disease. 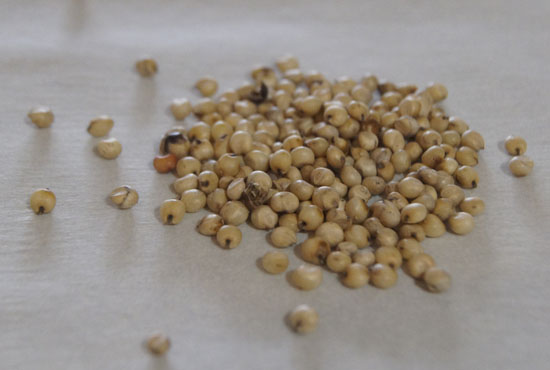 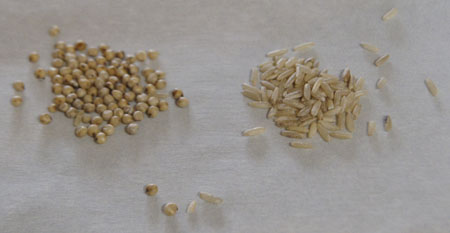 Whole grain sorghum has a glycemic index of 62 (source: SimplySorghum). Anything under 55 is pretty good for a grain.

Not to forget: sorghum is gluten-free. 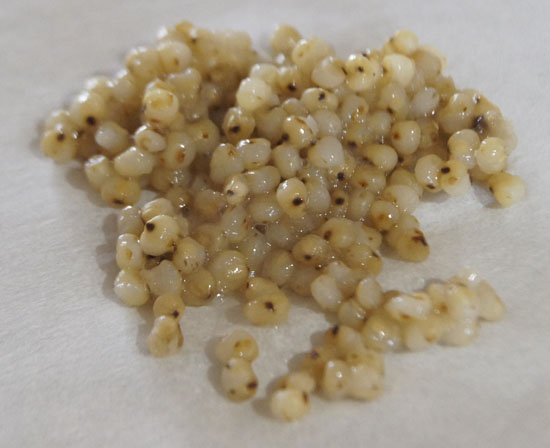 Sorghum can be used much like wheat berries, kamut, and farro. It is a large grain and more suitable for side and main dishes than porridge (at least, in the whole grain form).

As a flour, it can be added to all sorts of baked goods. King Arthur Flour has several suggestions for using sorghum flour along with other gluten-free flours to make yeast and quick breads.

Popped sorghum can be eaten “as is” or added to snack bars, granola, salads, and desserts.