Pierre Thiam told me about fonio in a TED Talks podcast, “A Forgotten Ancient Grain That Could Help Africa“. That grain was fonio. I was fascinated. I’ve been to Africa, and my son-in-law and first grandson were born there. My daughter worked on helping West Africans build sustainable businesses while in the Peace Corps. I am curious about grains, and interested in West Africa, so fonio is right up my alley.

Besides the podcast, I consulted these three resources, and then wrote my own brief synopsis below the references.

Fonio is an ancient grain that has been grown in West Africa for thousands of years. It is drought resistant, and the first crop to come in after the rainy season. It is more nutritious than rice, with more protein and a lower glycemic index. It is a very small grain, and requires a lot of labor to harvest. (Labor is cheap in the area, and farm equipment expensive.) A few people, such as the owners of the business Yolélé, believe that fonio could help locals remain in the area, produce fonio for sale on local and world markets, and help the development of the area. The blogger Oluwafemi brings up another issue: the preference of locals, especially when they move to the cities, is to default to what isn’t homegrown, thus giving up on ancient and traditional grains like fonio. Developing and encouraging homegrown products instead makes a lot of sense.

Since fonio is gluten-free, with proper development, it could rival quinoa for Westerners on gluten-free diets. Some worry that if that happens, all the fonio produced locally  would disappear from diets in West Africa and instead go to other countries, much as quinoa is disappearing from diets in South America.

Fonio is the grain from a grass, genus Digitaria, that is related to millet but much smaller. (Wikipedia.) There are white and black varieties of fonio (black fonio is found in Togo and Mali).

I was able to purchase Yolélé fonio online for about $7 for 10 ounces. I kind of wonder how this “boutique” grain will catch on in the US and actually provide a living for working folks in Africa, but I admire the founders of Yolélé for making the effort. To me, perhaps local production and local consumption in West Africa is a better answer. The crop is easy to grow, nutritious, and can be grown with sustainable agriculture. 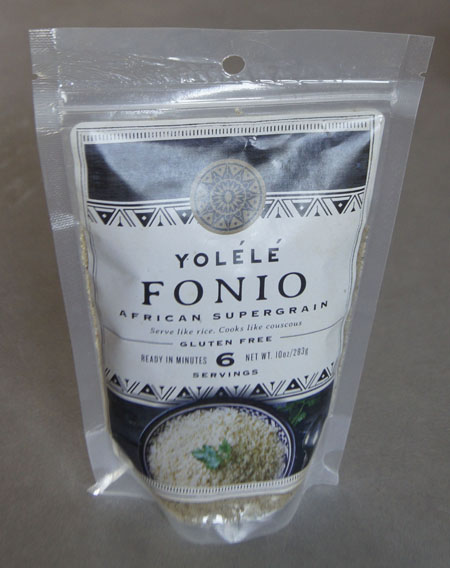 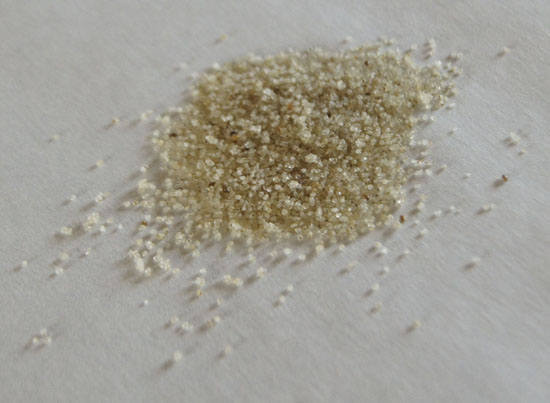 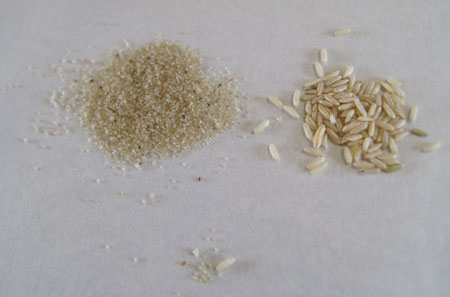 It is really tiny! The Yolélé package states that the fonio they sell is pre-cooked. I am not sure if this process is similar to the production of bulgur, where the grains are first parboiled and then milled into smaller pieces. My guess is that the pieces of fonio we see in the above photographs is unmilled grain, but I am not sure.

1/4 cup of dry fonio has 170 calories, 1 gram fiber, 2 grams protein, and some iron. I note that the values for protein and fiber are less than most of the other grains I have covered.

Yolélé foods states that the glycemic index of fonio is 57. (Anything under 55 is pretty good for a grain.)

Fonio is gluten-free, an important consideration for those on gluten free diets.

Fonio is a whole grain.

The Yolélé package and a couple web sites (The Guardian and Health Benefits Times) tell us that fonio is particularly nutritious because of two amino acids, cystine and methionine. Amino acids, recall, make up proteins. Some proteins have more or less of certain amino acids in them, and thus used to be called “incomplete proteins”, although this theory has been pretty much debunked. (See Diet for a Small Planet, one of my 250 Cookbooks posts.) Still, particular amino acids are shown to have certain health benefits, as I learned from a quick net search. Methionine is good for skin, hair, and nails; cystine is also good for skin and hair, assists in detoxification, and helps in healing wounds or burns.

At the end of the cooking time, the Yolélé says to fluff the fonio with a fork and add salt and butter or oil.

Okay, time to taste this fonio. I grab a spoon and tentatively dig in. Oh, yum! I like this! It is kind of like cream of wheat (farina), but less wheaty and more . . . delicious! I would definitely like this as a breakfast cereal, maybe with a little fruit and rich milk. A few spices? Yes, especially cinnamon. And a little sugar. 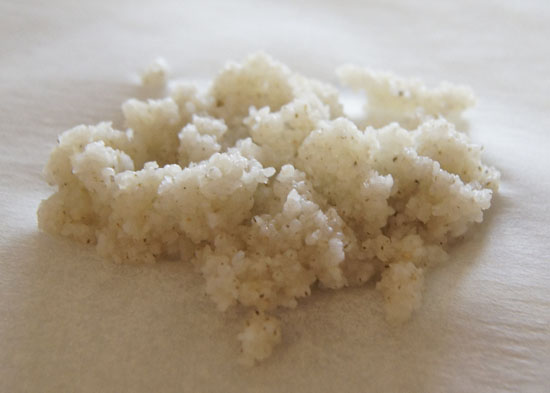 Indeed, I tried fonio for breakfast with sultans, sugar, and milk. It was quite good. I think it would also be good with a fried egg on top and some sort of sauce.

Fonio can be used as the whole grain (at least I think the package I bought is), or it can be made into flour. I have not yet found fonio flour for sale online or in stores.

Below are examples of recipes that show the wide variety of uses for fonio.

Herb Fonio Cakes Topped With Shrimp and Asparagus on the Earth’s Goodness site.

Fonio Sushi from the TED blog.