Teff is a tiny grain from Africa. I learn from the Bob’s Red Mill package that it is the smallest grain in the world, and “It has long been an important food for Highland Ethiopians, who use it to make everything from bread to beer.” It is one of the ancient grains, it is a grass, and it is gluten free. Teff comes in black, brown, and ivory varieties. It is sold as the whole grain and as flour.

Oldways Grain Council has become one of my favorite grains websites, so I direct my browser there. The information (and quote) in this paragraph is gleaned from that site. Teff kernels are 1/150 the size of wheat kernels. The word “teff” comes from teﬀa, meaning “lost” in Amharic, an Ethiopian language. The scientific name for teff is Eragrostis tef. Why do I mention this? Because eragrostis is the genus “lovegrass”, and I like that name. Teff is easy to grow: a handful of seeds sows a large area, it grows in wet and dry conditions, and can be cultivated from sea level to 10,000 feet. Teff is nutritious, with a high protein and calcium content. “It’s been estimated that Ethiopians get about two-thirds of their dietary protein from teﬀ. Many of Ethiopia’s famed long-distance runners attribute their energy and health to teﬀ.”

Teff is championed in the US by Wayne Carlson, much as is kamut by Bob Quinn and fonio by Pierre Thiam. Carlson’s company website is The Teff Company. The company produces the teff under the brand name Maskal Teff. Carlson first became interested in teff while living in Ethiopia during the early 1970s. Here is a direct quote from the website: “He lived as a guest of the local farming community, and found the farmers eager to show their crops. Wayne became devoted to the local food, and soon discovered that while the farmers had a wide variety of crops, they preferred to grow and eat teff.” The Teff Company found Idaho to have an ideal climate for growing teff.

A 2016 New York Times article states that the Ethiopian government prohibits its farmers from exporting teff in order to keep teff affordable in Ethiopia. This comes from the lesson learned from quinoa, originally a staple in the diets of many South Americans but now unaffordable by many locals. (I discussed this briefly in my post on fonio.) The Ethiopian government would like to make black, brown, and ivory teff varieties protected brands, much like Ethiopian coffees. The NY Times article also states that teff is high in protein and iron, has more calcium and vitamin C than “almost any other grain”, and much of its fiber is a resistant starch that might improve blood sugar levels.

Teff kernels cook up like a porridge, according to the websites I visited. I might get more use out of this grain if I buy the flour and incorporate it into breads. But let’s see first if I even like the taste!

The whole teff I purchased from Bob’s red mill is brown. And, it is about the size of poppy seeds. 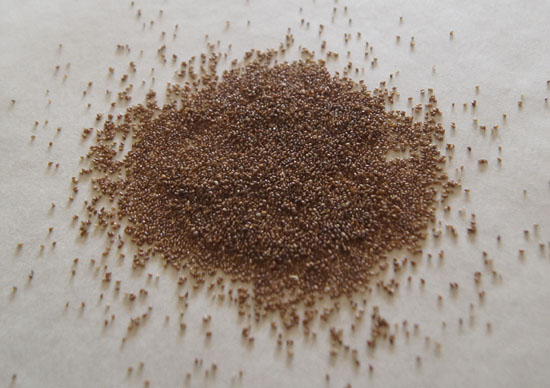 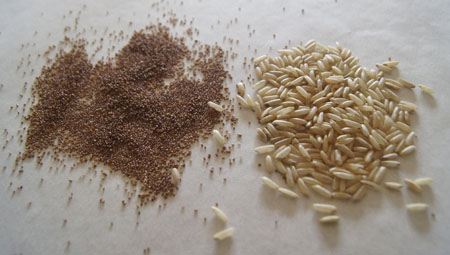 The glycemic index is reported as 74 (Teff: Nutrient Composition and Health Benefits by Kaleab Baye). (Anything under 55 is pretty good for a grain.)

Teff is gluten-free, an important consideration for those on gluten free diets.

Teff is a whole grain.

The above cooking time is for brown teff. Check the package instructions if you find one of the other varieties of teff.

I cooked 1/4 cup of Bob’s Red Mill brown teff and it yielded 3/4 cup cooked. The kernels never get real soggy, and when cooked, sort of have the texture of poppy seeds.

I liked the taste! Slightly sweet, definitely not bitter, a bit earthy, and pleasing. The texture – like poppy seeds – is unusual, but not necessarily bad. I think I’d like to try keff mixed with oatmeal and other grains as a breakfast cereal. 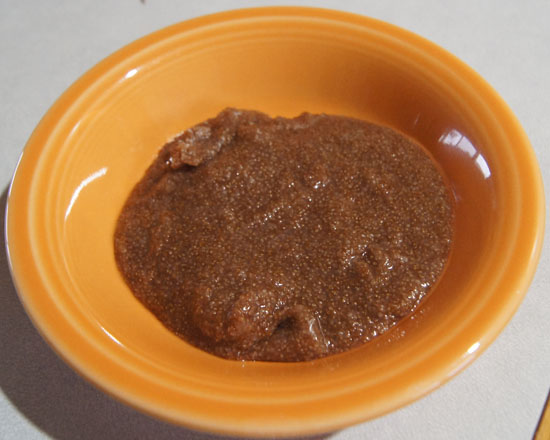 Teff is a natural for hot breakfast cereal, perhaps mixed with other grains for variety. I made the “Teff Porridge with Dates and Honey”, a recipe on the Bob’s Red Mill package, and it was delicious. For that recipe, the dry teff is toasted in the cooking pan and then the water is added. It’s simmered for 10 minutes, then the dates and honey and cloves (I used cinnamon) are stirred in and the mixture cooked until thick and yummy.

In Ethiopia, teff is used to make traditional injera bread. Injera bread is often used as a bowl for stews, kind of like a wrap or flatbread.

Links to recipes using teff are below. The first group are recipes for injera, and the next two groups are the Teff Company and Bob’s Red Mill sample recipes. Note that injera is made from teff flour. Indeed, at least of half of the recipes in all the links below call for teff flour.

Injera, or Ethiopian Flatbread (the linked sites might be explored for more general teff recipes) 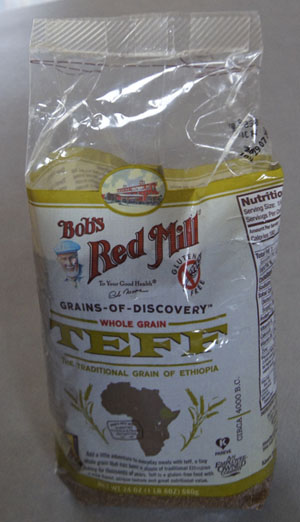