I used to think buckwheat was a type of wheat. But no. Wheat is a grass, and buckwheat is not a grass, instead, it is a pseudocereal related to sorrel and rhubarb. So why the heck does it have “wheat” in its name? Because it is “used like wheat”, or because its triangular seeds look like the seeds of the beech nut tree – “beech wheat” somehow became “buckwheat”. (Wikipedia).

Buckwheat is officially one of the ancient grains. It has been cultivated for thousands of years in Southeast Asia, Central Asia, Tibet, and Europe. It was brought to America by Russian immigrants and is still used in traditional dishes.

I bought a package of “kasha” from Bob’s Red Mill. Kasha is (roasted) buckwheat kernels. Kasha lacks only the husk, and is therefore a whole grain. I have buckwheat flour in my pantry, for use in yeast breads, quick breads, and pancakes. Buckwheat is a gluten-free grain, and this has helped increase its popularity in Western countries.

I used to associate “kasha” with the cereals under the “Kashi” brand. For years, this was my “healthy dry cereal” for breakfast. Kashi does have some buckwheat in most of its cereals, but their website does not talk about kasha.

Buckwheat is a topic in some of my early health food books, bread books, a pasta book, and a nutrition book. While covering PastaMatic MX700, I took the time to look it up and first discovered that it is not really wheat. In my Handbook of the Nutritional Contents of Foods post, I learned that it has a nutrient profile similar to wheat, but it has a lower glycemic index. PastaMatic MX700 has a recipe for buckwheat noodles. Eat, Drink and Be Healthy, published in 1971, advises the reader to “look for milling companies in your area and ask them about wheat germ, whole-grain flour, buckwheat, peanut, rice, and other flours”. The Tassajara Bread Book, published in 1970, encourages the use of rye, corn, millet, barley, rice, oats and buckwheat flours in breads. Vegetariana has several recipes that include buckwheat. 1000 Vegetarian Recipes tells me that “it’s uncommon to find buckwheat in its raw form. Most often people confuse kasha, which is roasted buckwheat, for raw”.

I bought my buckwheat flour while writing the  Handbook of the Nutritional Contents of Foods post. This flour is bluish-purple in color. I used it as part of the flour in a loaf of My Daily Bread. The bread cooked up beautifully, albeit bluish-purple in color, but I really cannot stand the taste of buckwheat! It stinks too!

The kasha I bought for this post is not bluish-purple, so maybe they will taste better than the buckwheat flour. I open the package and sniff the kernels. They do not have the same stink as the buckwheat flour. Maybe they will taste good . . . but no. I cooked them according to the package instructions and I don’t like the taste! They are bitter, and just not to my liking.

Wondering if I am the only one who doesn’t like the taste of buckwheat, I searched online. Thekitchen.com admits that many do not like the taste, calling them “bitter and strong”. A Washington Post article states “A little earthy, a little nutty, a little bitter: The flavor of buckwheat can be intense. But roast buckwheat seeds, or mix buckwheat flour with other flours, and the taste is tamed”. My book 1000 Vegetarian Recipes states “Kasha has a very distinctive flavor and most people either love it or hate it, but few feel indifferent.”

Kasha is in the Oldways Whole Grain Council’s “grain of the month” series. They do not mention any objections to the taste of buckwheat, and state “buckwheat has played an important role in diets around the world, mainly in Asia and Eastern Europe. Buckwheat has been providing essential nutrients, vitamins, energy, and ﬁber to humanity for approximately 8,000 years.” 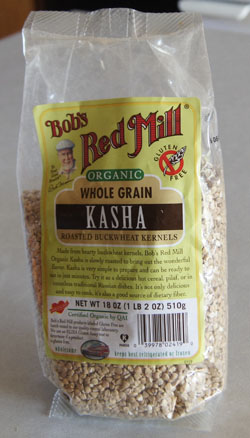 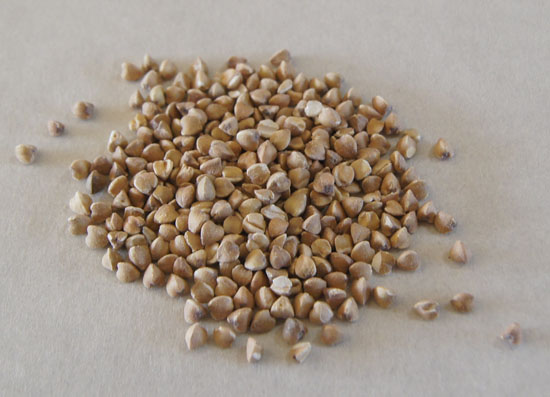 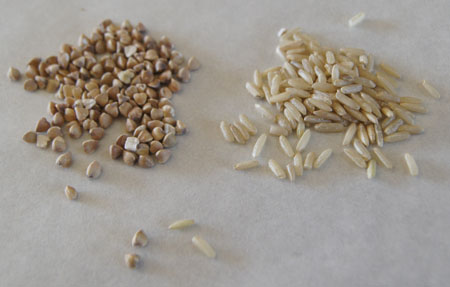 Be aware that kasha can come in medium and fine types, or it may not be whole grain and it may not be roasted. I suggest to cook according to the package instructions, if you have it. 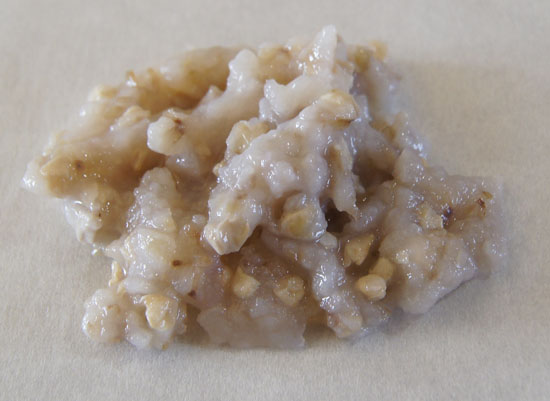 The values for kasha purchased from Bob’s Red Mill: 1/4 cup of kasha has 160 calories, 2 grams fiber, 5 grams protein, some iron and potassium.

The glycemic index of buckwheat groats is reported as 45 and 54, depending on the source (see below). (Anything under 55 is pretty good for a grain.)

Buckwheat groats are used as porridge and in hot and cold side dishes, much like farro, freekeh, and wheat berries. Buckwheat flour is used in quick breads, yeast breads, noodles, and pancakes (regular, blinis, and crepes). Buckwheat honey, strong and dark, is available through several online sources.

Buckwheat pancakes are called blinis in Russia and galettes in France. In India, foods made from buckwheat flour are enjoyed, especially on fasting days. Buckwheat is used in several Asian cuisines, for instance, Japanese soba noodles.