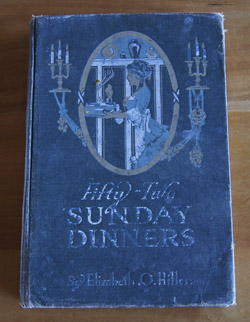 Note the publication date: 1913!  This is my third-oldest cookbook – 101 years old! I store this one on a shelf above my main collection, with other cookbooks of very special interest.

I entered this book in my database as originating from “Mother’s collection”. I do not remember seeing this book at our childhood home, and she did not write notes in it. So I do not know its history. Was it one of Grandma Burch’s cookbooks? My mother’s mother was a great cook. Especially desserts: “I only eat dinner to get dessert!” 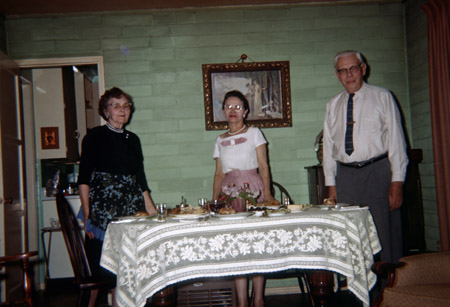 Grandma (center) and Grandpa Burch with one of her own Sunday dinners. (And wearing a dress she made.)

The price is printed on the back of the title page:

This cookbook doesn’t look well-used. There are some food marks, but few pencil markings. A couple neatly-clipped recipes are tucked between pages. My guess is that my grandmother clipped these recipes: she was very neat. My mother was more like me, a messy recipe clipper. Neither of us could tie a ribbon bow, either, while her mother was an expert at bow tying. She was also a talented seamstress, sewing most of her own clothes. I remember that her hemming stitches were small and neat. Mother and I made bigger stitches, a little less neat. Ah, memories.

Fifty-Two Sunday Dinners is a charming artifact, a bit of history, a peek inside American kitchens a hundred years ago.

“The title of ’52 Sunday Dinners’ has been given the book because Sunday dinners as a rule are a little more elaborate than the other dinners of the week, but from these menus may be gleaned helpful hints for daily use.”

This has changed a bit since my childhood: a big sit-down Sunday dinner is less prevalent. But what has not changed is the goal to eat healthy food:

“The eternal feminine question is, ‘What shall we have for dinner to-day?’ It is not always the easiest thing in the world to think of a seasonable menu, nor to determine just the right combination that will furnish a meal appetizing and well-balanced in food values. Furthermore, both the expense and the amount of work entailed in preparation must be considered. This Cook Book is especially designed to meet just that pressing daily need of the housewife.”

Of course I cringe at “the eternal feminine question” clause, but it serves to remind me once again: “we’ve come a long ways, ladies”.

I was quite surprised to find that this entire book is online, part of the Gutenberg project. It’s copyright-free, so I can copy as much as I like into this blog. And you can read this book right now and see what you think of it.

The cookbook is organized as chapters for each month of the year. Each chapter begins with a quote. These quotes speaks to me:

“Let hunger move thy appetite,
And not savory sauces. –Shakespeare.”

“Hunger is the best seasoning for meat,
And thirst for drink. –Cicero.”

That’s why my resolution for 2014 is to eat something each day that makes me immediately want another bite. There is a hidden meaning in my resolution: If I’m hungry, I sense the flavor in even the healthiest of foods, and something very sweet tastes so bright it bursts with flavor. So, stay hungry.

“If you are an artist in the kitchen, you will always be esteemed. –Elizabeth in Her German Garden.”

I think this would have been a quite useful cookbook back in its day. It includes a good variety of recipes, and interesting menu suggestions. Basic cooking techniques are not covered; it was written for the home cook who already had a good grasp of the basics. This was the era before canned soups, biscuit mixes, boxed frostings, packaged hamburger, boneless chicken breasts . . . food processors and microwave ovens. Food preparation for these Sunday dinners would have taken the housewife hours in the kitchen.

“In the interest of health and economy a number of the recipes suggest the use of Cottolene—a frying and shortening medium of unquestioned purity—in place of butter or lard. Cottolene is a vegetable shortening, pure in source and manufactured amid cleanly favorable surroundings. It is no new, untried experiment, having been used by domestic science experts and thousands of housewives for nearly twenty years; to them Cottolene for shortening and frying is ‘equal to butter at half the price, better and more healthful than lard—and more economical than either.'”

“There isn’t an ounce of hog fat in Cottolene, and from cottonfield to kitchen human hands never touch the product.”

Cottolene was a brand of shortening made of beef tallow and cottonseed oil. (Wikipedia, accessed 2014.) It was popular until the mid-twentieth century – about the time shortenings like Spry came to American markets.

I was charmed by the menus. Not quite charmed enough to make a full dinner from one, though. I chose the menu for the second Sunday of March, the week I began this blog entry. Below is the menu and associated recipes. Note the faint handwritten note: “½ of ¾ = 3/8”. 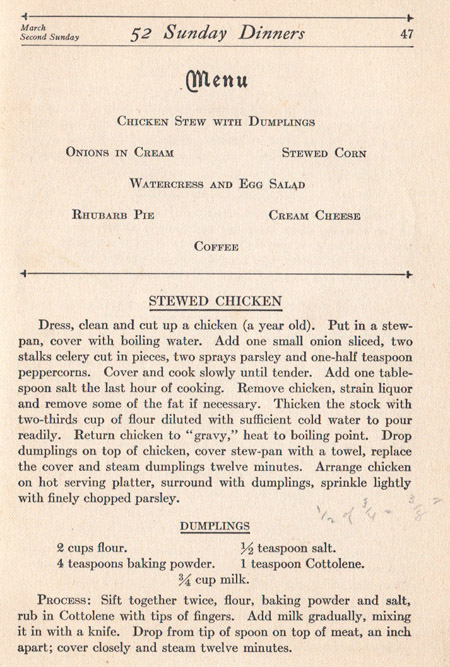 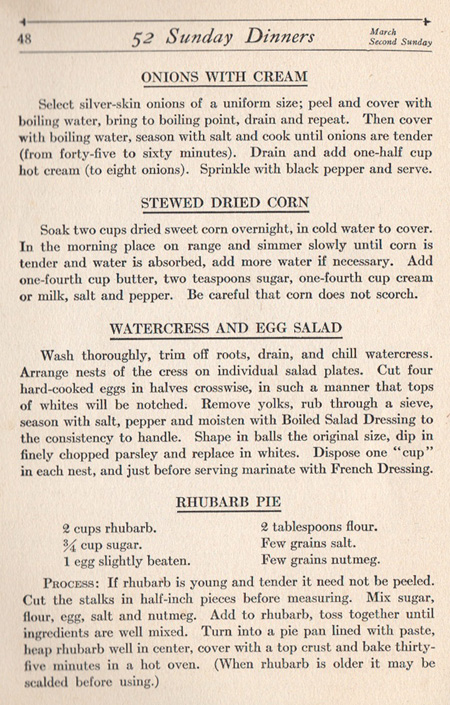 I decide to make variations of two of the above recipes: the chicken stew with dumplings and the onions with cream.

I am not about to dress, clean and cut up a “year old chicken”, nor cook it for several hours. My choice is to start with boneless chicken thighs and cook for about an hour. I will add vegetables to the stew, since that is part of “healthy food” lore in the US today. I have a great recipe for chicken and dumplings that I developed myself, and will share it with you (below).

I will make some onions with cream; they sound easy and reminiscent of the creamed onions I remember from the 50s. Stewed dried corn? No, don’t think I’ll try that, or the watercress and egg salad. I’d love to make the rhubarb pie, but, too many calories.

Boil the peeled onions in salted water for 20 minutes. Drain, then add enough cream to coat them. Grind some pepper over them, and they are ready to serve.

Here are the little pearl onions. I have cut off the tips of the growing end, leaving the root end intact. 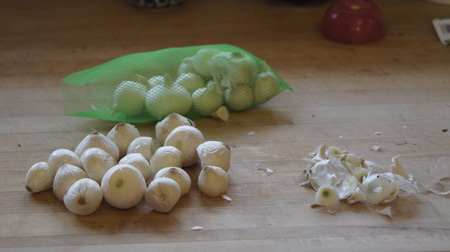 After a 2-minute boil, you can squeeze the onion out of its skin: 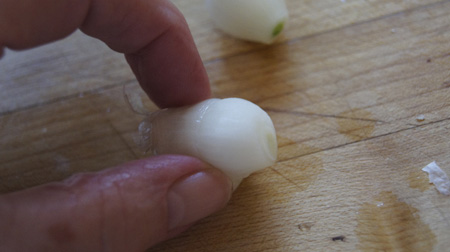 Here they are, after a 20-minute boil, drained of water and lightly coated with cream: 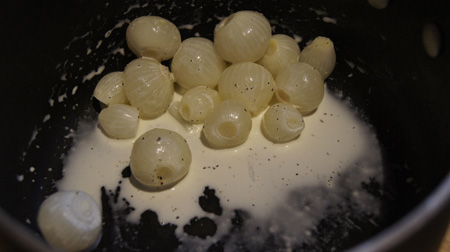 I liked these. I put them atop my serving of chicken and dumplings (below). Fifty-Two Sunday Dinners also has a recipe for more traditional creamed onions, served in a more traditional white sauce. I chose this recipe because I had a bit of heavy cream in the refrigerator that I wanted to use up. High in fat and calories, but I just used a bit, and it really brightened the flavor of the pearl onions.

Here is my promised recipe for chicken and dumplings. This recipe is a work-in-progress, as I keep making tiny changes each time I make it.The chicken has no bones, the sauce is thick and flavorful, and the dumplings are soft and a tiny bit gooey.

Chicken and Dumplings PLF
serves 2 or 3

Any covered pot that can go on the stove top will work for this recipe. I always choose an oval Le Creuset, because it allows for lots of dumpling space.

In the pot, cook the onions, celery, and leeks in a little olive oil until they soften. Add the garlic and stir a minute or two, then add the 2 tablespoons of flour and stir constantly for a couple minutes. Slowly stir in a cup of chicken stock (or water), until all the flour is incorporated into the liquid.

Add the chicken, carrots, potatoes, bay leaf, thyme, and salt and pepper. Add more stock or water until the vegetables and chicken are all immersed. Simmer about an hour, lightly covered, until the vegetables are tender. Check occasionally; add more broth/water if the mixture is getting too thick.

Just before you add the dumplings, remove the bay leaf and the thyme sprigs, and add the peas and the parsley.

Drop the dumpling dough by tablespoonfuls (golf ball sized) onto the stew. Cover, set the heat low enough to maintain a gentle simmer, cook until dumplings are firm, 25-30 minutes. 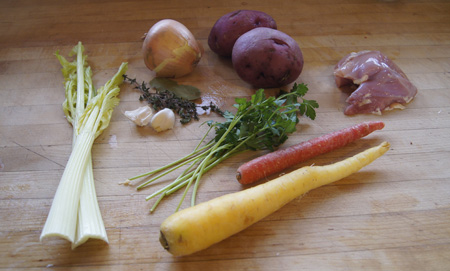 The stew mixture, before the hour simmer: 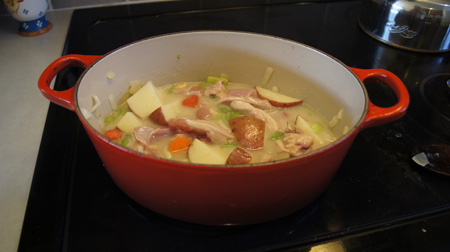 After simmering and adding the peas and parsley, just before adding the dumpling dough. At this point, the broth should be a little thick and covering the vegetables. Check the taste for salt and pepper. You can see my dumpling dough in the back: it is rather sticky. 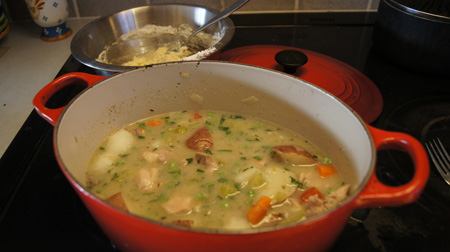 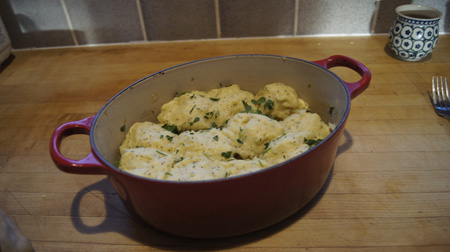 The aroma is heavenly (I got comments!) This version of my Chicken and Dumplings was wonderful. Homey, full of nutrients, low in fat, and delicious to boot. I might add less dumpling dough next time (my dining partner tolerates dumplings but doesn’t love them like I do). But as I said, this recipe is a work-in-progress.

No Cottolene in my dumplings! In fact, note that they are fat-free. Chicken and dumplings is different from a chicken pot pie. For a pot pie, I would cover the stew with pie crust or biscuits made with shortening or butter, and bake in the oven. The result would be a stew covered with a golden brown pastry, and it would look beautiful and taste very good, but be laden with a lot more calories. But I gotta say, my Chicken and Dumplings are so good, we (barely) miss the fat.