The pie crust recipe that I used for years came from my mother. Hers was always perfect. Mine always tasted great, but was always difficult for me to roll out without tearing. I just lack a certain patience, I guess (well, I know). I kept using her recipe out of – well, maybe a bit of loyalty, or an acceptance that they did taste very good in spite of their looks, or maybe a laziness to find a new recipe that worked for me.

My mother’s recipe for a single pie crust is:

You mix the flour and salt then cut in the shortening using a pastry blender, sprinkle in enough water so that the dough just holds together, form into a ball, and roll out on a floured cloth. For a double crust, you mix the water with some of the flour first instead of sprinkling it in. 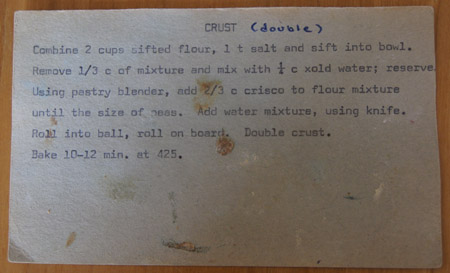 My well-used recipe card. I typed the crust recipe onto a 3×5 rectangle of colored paper when I left my parent’s home.

The above recipe is almost exactly the same as the recipe in All-Time Favorite Pies. That one uses a bit more flour and water, but is still a flour-salt-shortening-water pie crust recipe.

I never looked forward to making pie crust, it was more like planning for an upcoming battle.

Finally, I decided to take on the project of finding a new pie crust recipe. I searched the web for recipes and advice, and tried several different recipes, came on one that worked for me, then nudged the method until I was satisfied with the results. I make about 4 pies a year, so it took me a few years to come up with my final version!

My recipe is heavily based on one I found on Cook’s Illustrated, under the auspices of America’s Test Kitchen (and Christopher Kimball). Their recipe title is “Foolproof Pie Dough for a Single-Crust Pie” (dated 2007). I don’t want to step on any copyright toes, and give full credit for the development of this crust to Cook’s Illustrated! My version below just gives a couple nudges that help me make this dough perfect each and every time I use it.

The trick to this recipe is: Vodka!

Pie Crust
makes more than enough for a 9-inch crust

Note: this recipe can be doubled or fractionated – I have tried both variations with success. The amounts below make more than enough dough for a single crust, but that’s kind of nice because it gives some leeway for impatient dough-rollers. Or, take the extra dough, sprinkle with cinnamon and sugar, roll up, and bake 10 minutes at 375˚ for little treats. (That’s what my mother always let us do!)

Put 3/4 cup of the flour and all of the salt and sugar in in food processor and pulse a couple times just to mix.

Add all of the butter and vegetable shortening. Process for 10 seconds and check. It should look like “cottage cheese curds” and there should be “no uncoated flour”. If it is not yet to the cottage cheese point, pulse one or two times and re-check. In my experience, largish chunks of butter remaining in this dough are okay. It’s better to under-process than to over-process.

Open the food processor and scrape down the sides of the processor bowl. Add the remaining 1/2 cup flour and quickly pulse 4-6 times.

Remove the dough from the food processor and dump it into a regular bowl.

Mix the vodka and water. (Keep in mind that you might not need all of this vodka-water mixture.)

Sprinkle most of the vodka-water mixture over the dough. Using a rubber spatula, press the dough together until it sticks together and is “tacky”.

The exact amount of “tackiness” after the vodka/water is added isn’t terribly precise. The times I’ve tried this, it definitely wasn’t sloppy, and each time had a different degree of “holding together” when pressed against the sides of the bowl. Somewhere between sloppy and falling apart is best. Add the vodka/water slowly and if you add it all and still need more wetness, go with straight vodka. You want it to hold together so it will roll out easily, but too sloppy a dough creates a less-tender crust.

If you are a seasoned pie crust maker and the tacky mixture just seems too wet, know (from this chemist) that the vodka will evaporate and by the time you roll it out, it will no longer be tacky.

After mixing in the water/vodka, flatten the dough into a 4-inch disk, wrap in plastic, and refrigerate before rolling.

Roll out on a lightly-floured cloth (like a flour sack cloth). When the crust is large enough to fit the pan, fold the cloth over to fold the dough, then gently transfer to the pie pan and fit and flute. Bake as directed in your pie recipe.

It rolls like a dream! Even I can do it!

I wrote myself a note on my final version of the new recipe: “And so with this, I leave behind Mother’s recipe for Crisco-flour-water-salt crust. That one was always flaky and wonderful, but this one rolls out in a manner more suited to my patience. It looks good, and tastes good. And, can be made ahead of time. And it means I now keep vodka in the freezer!”