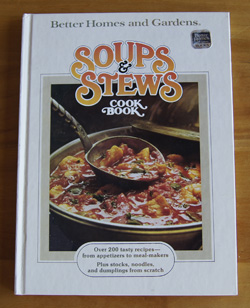 Another magazine cookbook. This one is hard bound, full size, and about 90 pages. I have no idea how I acquired this cook book, and have no notes in it.

So. At first glance, I find this a decent compilation of recipes for soups and stews, but not terribly inspiring. I usually just toss together a soup sans recipe, using whatever is on hand that catches my eye or imagination (or that needs to be used up). For this blog, I settle on “Turkey Soup with Danish Dumplings”, because I have turkey stock from last Thanksgiving and leftover turkey too. What the heck are Danish Dumplings . . . ? I am directed to page 90 at the back of the cook book.

And at page 90, I discover a few gems. Homemade noodles: plain, spinach, or cheese, made using a simple dough rolled out on a breadboard. Dumplings: Danish, fluffy, matzo, corn, and herb. Crackers! Either from white or whole wheat flour. I am a little bit goofy but I really want to try all of these. They will perk up my soup making.

About the soup recipes. The section on cold soups does not interest me. The hot soups are mostly pretty quick to put together, and in general call for fresh vegetables (good) and few packaged ingredients (good). Nutrition information is not included. I see some good ideas for soups; I am reminded that I haven’t made wonton soup in ages, or a Mexican-style soup. So I have some ideas for future meals. This cook book does serve a purpose and I will keep it.

Here is the original for Turkey Soup with Danish Dumplings:

I am going to have to re-name the soup “Turkey Soup with Sneaky Dumplings”. More on that later. I have my own turkey stock and cooked turkey in the freezer, so I will use those instead of following the above recipe. We don’t like turnips so I plan parsnips instead. I will also shake in a few more herbs.

While the soup simmers, prepare the dumplings. Combine the butter and water in a small pan and bring to a boil. Mix the flour, baking powder and salt and dump in all at once, stirring vigorously all the time. Continue cooking, stirring constantly, until the mixture forms a ball that doesn’t separate. Remove from heat and allow to cool slightly. Add the egg and immediately beat it into the dough until the mixture is smooth. Stir in the parsley.

Drop the dumplings from a tablespoon into the bubbling soup, making about 8 mounds. Cover the pot and simmer, covered (do not peak!) for 20 minutes. 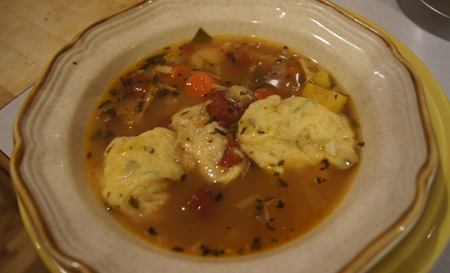 The soup is good, the star is the dumplings. The dough for these Danish dumplings is a cream puff dough, or pâte à choux. I have made cream puffs before: when you bake them in an oven they puff up and leave a big hole in the middle. As a scientist, I find this just a lot of fun. As an eater, well, yum! Fill them with cream for cream puffs or a filling for eclairs or a savory mixture for appetizers and you have a special treat. Baked, unfilled cream puffs are convenient because they store for awhile (you don’t have to cook them at the last minute). The disadvantage, in my often-on-a-diet lifetime, is the high percentage of butter in the recipe.

Okay. We know what cream puff dough is. It is usually baked on a sheet in a hot oven. On top of a wet soup? How will this turn out?

I note that the original recipe tells me to not lift the pan lid while the dumplings are cooking. Probably so that the dumplings will cook through. Can I resist the temptation to peak? No, but I can get around the obstacle by using a glass lid.

About 20 minutes before serving the soup, I drop 8 small globs of dough on top of the bubbling liquid. I note that there is a lot of soup surface uncovered. I cover the pot.

A few minutes later, I look over at the cooking pot. Whooa! The dumplings have grown! 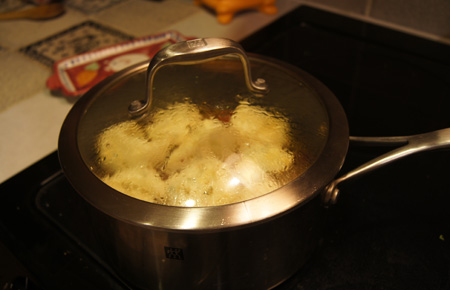 And a few minutes later, they have grown so huge that all I can see on top of the soup is dough, reaching almost up to the pan’s lid. I worry a bit that the soup will be overtaken by the dumplings.

Just before I serve the soup, I look in the pan: Oh! The dumplings shrunk! Now they are just nice-sized blobs on top.

So I call them “sneaky dumplings”. During their cooking, they stretch way up to the lid and then retreat back. If I had used a solid lid I wouldn’t have caught the dumplings in the act.

These dumplings are fun, but are they good? Yes! They are delicate and tasty and a great addition to a soup. And they take very little time to put together. I will make them again, definitely!