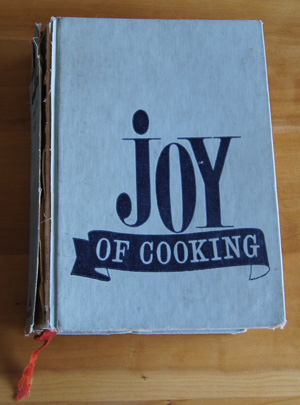 If my house were on fire, and I was able to save only one of my cookbooks, the Joy of Cooking would be it. It has lived in my kitchen since the seventies. The cover has fallen off the spine and I have many pages marked – but only with note papers, I never wrote in this book, I tried to keep it clean. Quite simply, this is my favorite cookbook, and entirely suitable for the placement of “100” in this blog.

I know I bought this book for myself, but I don’t recall the trip to the bookstore. It must have been in 1974, since that is the last listed printing date on the copyright page. That puts me living in a rented funky old house near downtown Boulder, a graduate student, fairly poor, just beginning to expand my cooking repertoire. I am sure that I stood in the store and paged studiously through this book before I purchased it – brand new and hardcover – with money that I had religiously saved up (or maybe the money was a gift from my Mother). It was a big purchase.

Joy of Cooking has a long history. In 1931 the author, Irma S. Rombauer (1877-1962), a Missouri homemaker from an immigrant German family, created the Joy of Cooking. She began as an amateur – she was neither a writer nor a professional cook. Her daughter, Marion Becker (1903-1976), illustrated the first version of Joy. The second edition came in 1936, and the third in 1943/46. By 1951, Irma Rombauer’s health was failing, and she negotiated a book contract that named her daughter as her sole successor in any future revision. (Wikipedia) Hence, the 4th edition, 1951, is the first authored by both Rambauer and Becker.

My edition of Joy of Cooking is the 5th, first copyright 1962. On the Joy of Cooking website, I learn that there is some controversy about this edition. Apparently the publishers released a 1962 version without the final consent of the authors, a version that was “garbled” and fraught with errors. It wasn’t until 1963 that the 5th edition was published in a form acceptable to Marion Becker. Luckily, my edition was printed in 1974. The 6th edition came out in 1975. To many, the 6th edition is deemed the best, although I would vote that the 5th edition is my favorite.

After Marion Becker’s death, her sons, Ethan and Mark, took over the Joy of Cooking. The book remained unchanged until 1997. During this period, Bobbs-Merrill folded and Simon and Schuster purchased the copyright. Working with Ethan Becker, Simon and Schuster hired a cookbook editor, changed the writing style of the book, and included input from various professional food writers/chefs. Diehard Joy of Cooking fans often don’t like the seventh edition. The eighth edition, the 75th anniversary edition, came out in 2006. The original voice of the Joy of Cooking was restored, and it includes some of the information deleted in the 7th edition.

The Joy of Cooking has been in print continuously since 1936 and has sold more than 18 million copies. Pretty amazing.

Why do I like this book? It is extremely comprehensive, and has a bent that satisfies my scientific side. If I want to learn how to cook just about anything, I consult this book first. I did in the seventies and I do so today. How to make German potato salad? It’s there. How to cook a lobster? Yes. How to pluck a chicken? That too.

I like too that the recipe instructions are clear, and written in “action-style”. For instance, the ingredients for a recipe’s first step are listed, instructions given, then ingredients for the second step are listed, instructions given, etc. (See my recipe scan below for an example.) Often, alternative ways to finish a basic recipe are given, such as different fillings for raviolis, or three different variations for a chicken stew. When recipes include methods or ingredients that are covered in a different section of the book, a referral page number is given for the convenience of the reader. And, this book has a great index.

I enjoy the “voice” of this book. It is written in the first person: “we like this version” or “if you, like us, expect a 100% return on your efforts” or “In the foregoing pages we have supplied . . . “. Countless comments are throughout, for example, for hollandaise sauce they write “Our cook calls this “holiday sauce”, isn’t that a grand name for it?” or for banana cake “Do try this, if you like a banana flavor . . . ” or for maple cream candy “Who would ever suspect that this delicious confection was just plain maple syrup in a more solid form?” Throughout are asides: stories about their travels or historical figures. It’s written with a little attitude or bossiness, as illustrated in the instructions for cooking Puffed Potatoes in hot oil: “Drop the slices in separately. Do not crowd the pan. The slices will sink. This next admonition is not without danger for the unskilled. When, after a few seconds, they rise, use a continuous shaking motion with the pan, which will set up a wave-like action to keep the floating strips bathed in the fat.”

The Joy shows a definite German influence. As such, it appeals to my own German heritage: three out of four of my grandparents were mostly German. Thriftiness, industriousness, stubbornness, holding to traditions – these are the traits that I associate with my German ancestry. Irma Bromauer and her whole family worked hard to get this book out and keep it updated over many decades. And it’s a long book – my edition of Joy is 849 pages. That is a ton of work! Oh – this is touching. In the dedication, Marion Becker writes: “Working with Mother on its development . . . ” Note that she, like I, called our mothers “Mother”. Not mom or mommy or ma. Maybe it’s the German heritage.

Finally, a quote from the foreward that speaks to me: “Most important to us are all of you, both at home and abroad, who are preoccupied every day with that old yet ever-new question, ‘What shall we have for dinner?'”

I always use a Joy of Cooking recipe for my cheese souffles, blender hollandaise sauce, cooked red cabbage, and potato pancakes. And Caesar’s Salad, which I decide to make for this blog. I’ve made this tons of times. If I have a Caesar’s salad in a restaurant, I always compare it to the Joy’s version, and they rarely measure up. This is a “classic” Caesar’s, no mushrooms or other vegetables, and the perfect dressing, made on the salad rather than in a bottle. 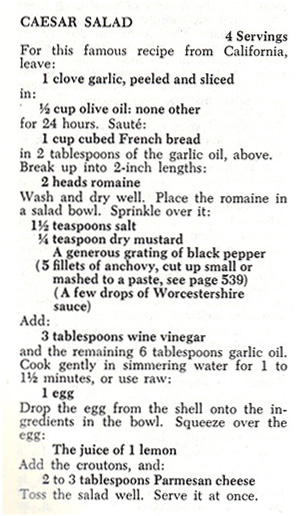 If you follow this recipe, you will be successful!

I am not going to type in this recipe, since I always refer to this cookbook to make it. I always halve the recipe for the two of us, but I still use a whole egg. Remember to put a clove of garlic in olive oil early in the day. Use fresh lemon juice, no other. I prefer grated fresh Parmesan cheese rather than the stuff that is sold in a can. I use the amount of romaine lettuce that I think the two of us are hungry for. Anchovies? My husband loves them, I only like them, so I put more in his salad. When adding the vinegar, lemon juice, and oil, I usually measure out the recommended amounts, then add a portion of each, toss the salad, taste, and add more if I feel it needs it.

Here are my ingredients, sans lettuce and croutons:

The croutons are stars in this salad. Make them fresh and just before you put the salad together. And use that garlic-soaked olive oil to fry them. 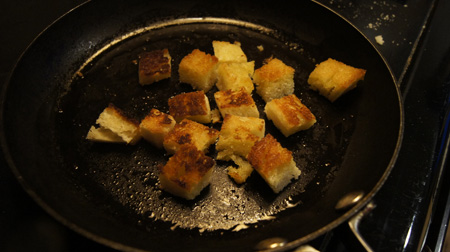 Here are our salads, moments before we ate them: 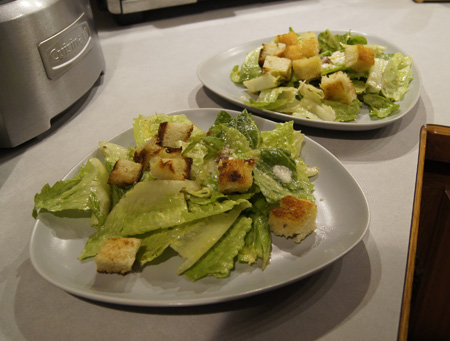 Mmmm. I still have lots of romaine. I think I’ll make Caesar’s salads again tonight! Thank you Joy of Cooking for helping me make a great dinner, once again.