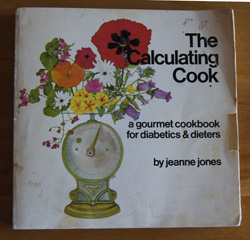 The Calculating Cook, a gourmet cookbook for diabetics and dieters is one of my old-favorite cookbooks. I learned about the diabetic “exchange diet” from this cookbook, a diet plan that correlated well with a health club’s plan that I acquired in the early 70s. I still make crepes from a recipe in this cookbook.

So it’s with pleasure that I return to my well-used book. I open to Jeanne Jones’ personal and friendly Introduction. Ms. Jones always loved to cook and went to several French cooking schools. She liked to entertain, holding small dinner parties for friends, filled with good foods and with no thought to calories. Her life changed with a shock: she found out she had diabetes. She felt her life was ruined: “How could I give lovely, gourmet dinner parties when I had been put on a diet that I had never even heard of before, without sugar, with practically no fats and measured amounts of almost everything else!” But a thought came to her: “If I could adjust my favorite recipes, and work out new ones, so that I knew exactly how much of everything was in each portion I could still cook very exciting food and stay completely on the diet program at the same time, and so could anyone else using my recipes. That was the day I stopped crying and became The Calculating Cook.”

The Calculating Cook was Jeanne Jones’ first book (as far as I can tell). Since then, she has authored over 30 books, including Cook It Light Menus for Every Occasion, Homestyle Cooking Made Healthy, and Canyon Ranch Cooking: Bringing The Spa Home. She writes a syndicated column called “Cook it Light” for King Features, a kind of “Dear Abby” column where people write in with recipes that they would like to lighten up. She also consults for spas, restaurants, and food companies, lectures at conferences, and has appeared on TV talk shows. A couple bios: Jeanne Jones website and Women’s International Center. This link to the Akron Beacon Journal website illustrates some of her Cook it Light columns, and here is one on the Arizona Republic.

During my searches, I learned that she is now in her late seventies and lives in Laguna, California, just down the coast from where my husband grew up. In 2013 she was robbed at gunpoint in that home and in 2014 the robber was convicted. I saw a photo of her home online, and it is gorgeous. She was even the executive producer of a film, The Streetsweeper (2003).

The exchange diet is a food choice system designed to help diabetics plan manage their glucose levels. Food exchange categories include: fruit, bread/starch, vegetables, milk, meat, and fat. This is a balanced, sensible diet plan that eliminates calorie counting because it’s already been done for you, all you have to do is adhere to portion size and choose the appropriate number of exchanges from each food category each day. More information: USDA National Agriculture Library on the diabetic diet and University of Arkansas’ food exchange list.

What to cook from this book?

I have some trouble finding a recipe in The Calculating Cook to cook for this blog. Why? So many of the recipes call for things that you need to prepare and have on hand, like “tomato juice ketchup”, “jelled milk” (a concoction of skim milk, water, and gelatin), or “magic mayonnaise”. In today’s supermarkets, I can find thousands of low-calorie basics, so no longer do I have to resort to homemade tactics. Many recipes call for sugar substitutes; I prefer not to use these. While I learned a lot from this book when it was new, I have since graduated from it: I have the knowledge in my own head to create light versions of almost any recipe.

I choose to make “Happy Hollandaise Sauce” and serve it over asparagus. My usual hollandaise sauce ingredients for 1 cup of sauce are:

Thus this sauce has close to a 1000 calories in 1 cup. The Calculating Cook’s version has about 350 calories in a cup. That’s quite a difference! 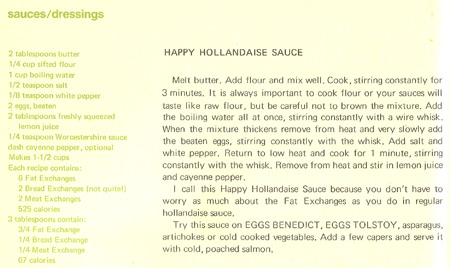 To go with the hollandaise-asparagus, I find a recipe on Jeanne Jones’ website: Lamb Chops with Herbed Apricot. My slightly changed and re-named version of this dish is below. The original recipe calls for a can of fat-free chicken stock. I usually keep homemade stock on hand, so I used that instead. I always de-fat my stock by placing it in the refrigerator overnight. And that’s exactly how The Calculating Cook tells me to make stock. Maybe I learned this technique from this very book!

Melt the butter and then add the flour. Cook and stir for at least a minute (do not allow to brown). Add the boiling water all at once and stir constantly until the mixture thickens. Remove from heat.

Whisk the eggs, then add them in a slow stream to the butter-flour-water mixture, whisking constantly. Return the pan to low heat and cook about a minute (to cook the eggs), then stir in the salt and pepper and lemon juice. Serve.

The leaner the lamb the lower in calories this dish will be. I found bone-in lamb chops, and they had a bit of fat on them that I tried to cut off.

Sprinkle both sides of the lamb chops evenly with the garlic powder, salt and pepper. Heat a non-stick or a cast-iron pan over medium heat. Add a few drops of oil or non-stick vegetable spray if you wish. Brown the lamb chops on both sides.

Combine the dried apricots and the chicken stock in a saucepan and boil, uncovered, for about 5 minutes. Cool a bit, then put in a food processor or a blender. Add the herbs, nutmeg, salt and vinegar and process to a puree.

Pour the mixture over the browned lamb chops in the pan, cover, and simmer for about 10 minutes. 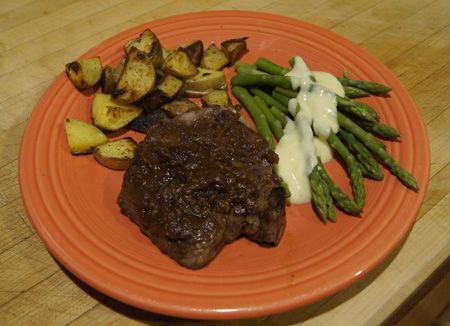 This meal was a hit, from the asparagus with light hollandaise to the lamb chops with apricots. I thought the sweet apricot topping counterbalanced well the distinct flavor of the lamb.

I used fewer apricots than called for. I purchased a 5 ounce bag of dried apricots, and according to the nutrition label, it has “4 servings at 100 calories each”. Thus adding the original amount of 4 ounces would have added close to 400 calories to this dish for two people. So, I cut the amount of apricots. My apricots didn’t contain any chemical preservatives, so they were dark brown. Not pretty, but tasty.

p.s. A couple days later, I reheated the leftover light hollandaise sauce, and it was still very good – over broccoli the second time. It would also be good over fish, I think.