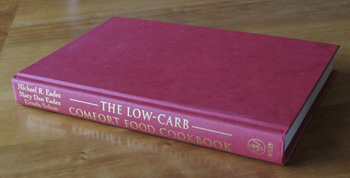 Yes! This is the cookbook I want to do this week: a book of recipes for the Atkins diet. Why? Because I’ve been reading a new book about the possible advantages of including fat in your diet, and it has got me re-thinking my own eating plan (again). That book is The Big Fat Surprise by Nina Teicholz. It’s an interesting read and if I am ambitious, I’ll post about it sometime soon.

The Atkins diet is high in fats and protein and low in carbohydrates. We tried this diet sometime in the early 2000s. I only lasted 4 hours on this diet – I just could not give up bread! My husband did better than me, and lost some weight, but he only stayed on Atkins for a few months.

My big issue with the Atkins diet is a logical one: figuring out how to prepare interesting meals without bread, pasta, rice, potatoes or any other carbohydrate-laden foodstuffs. That’s why I bought this Low-Carb Comfort Food Cookbook when my husband was on Atkins: I needed ideas.

This book gives a large variety of recipes to make meals less boring than a slab of meat and some salad. One I actually used a lot was “Mock Mashed Potatoes”, a dish made from whipped cauliflower, butter, cream, and mayonnaise. The Low-Carb Comfort Food Cookbook has recipes for breads such as rolls and loaves, as well as tortillas.

But. Years ago I tried the recipe for “Almost No-Carb Bread”. This was quite a project, since it entailed gathering the following ingredients: almond meal, wheat bran, gluten flour, soy protein powder, and only a tiny amount of whole wheat flour. The wheat bran required a “toasting step”. The result of all the work? A loaf that had a taste and texture that did not appeal to us. Tortilla recipes with similar “flour pretenders” are also included in this book. They looked like too much work so I never tried them.

This book’s main dish recipes for meats usually include added cream and butter. Since I was not on the Atkins, I had to cook separately for my husband. The Low-Carb Comfort Food Cookbook encourages the use of sugar substitutes, and I just don’t like using them. Cheese on the diet is limited to 1 ounce per day. (We love cheese.) Back in the early 2000s, I was able to find very few low-carb products on grocery shelves or by special order (such as tortillas) but in general, such products were not as prevalent as they are today. Planning and cooking meals was no longer fun.

I was quite happy when my husband abandoned the Atkins diet. I shelved this book and forgot I owned it until I was searching for this week’s blog entry. Now, I will definitely recycle this cookbook.

I do need to cook a recipe from this book for this blog before I abandon it. After leafing through the entire book, I decide to make “Refried Black Soybeans”. I recently rediscovered soybeans. These beans are higher in protein and lower in carbohydrates than are most other beans. Here are the comparative values for pintos and soybeans (1 cup each, cooked; source: NutrientFacts).

I made the recipe as in the scan (above), except I added a bit of cumin and chile powder. They only took a few minutes to put together: 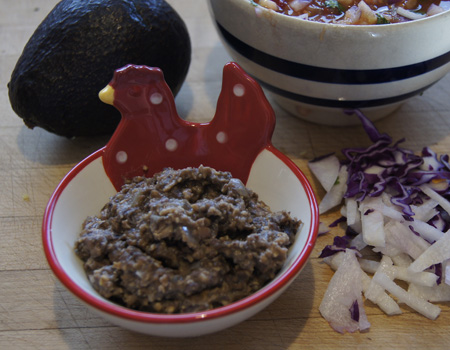 I liked these as a side dish for the tamales that I made for the same meal. I thought they were tasty, with a nice, kind of crunchy texture. But my husband went “bleh” and left most of them on his plate. I won’t make them again.