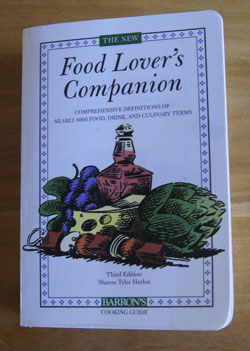 Food Lover’s Companion is a dictionary of food, drink, and culinary terms. No, it’s not a “cookbook”, but it’s in my cookbook database, so one of my “250 Cookbooks”.

I bought this reference book on the recommendation of a fellow classmate at the Culinary School of the Rockies (now Escoffier’s) in Boulder. While flipping through Artichoke to Za’atar, I thought to look up some of the unfamiliar Middle Eastern terms in Food Lover’s Companion. All the terms I looked up were there! And I thought “aha, I’ll use this incidence to segue from a cookbook to a reference book in my blog”. So now I hold Food Lover’s Companion in hand to find something to cook for this blog, even though I’ll have to search for the recipe elsewhere.

There are almost 6000 entries in this book. One might ask: Why own a printed dictionary when you can search online? A few reasons. One, often I find something else interesting when searching for a specific term. Two, books are often more carefully edited and researched than internet sources. And – especially in my case – sometimes your internet service is slow and boggy and fails. (That’s one of the downsides of living out in the boonies.)

“Abalone” is the first entry in Food Lover’s Companion. I know that word, but the second entry I do not: “abbacchio, Italian for a very young lamb”. I once bought a “black radish” at Whole Foods, now I know that this large radish dates back to ancient Egypt, and can be used in salads or stir-fry dishes. “Hangtown Fry” consists of fried breaded oysters cooked together with eggs and fried bacon, and is named for a town known for its frequent hangings. “Mesclun” is a “potpourri of young, small salad greens” – essentially it is “salad mix”. “Pound cake” was originally “made with one pound each of flour, butter, sugar and eggs”. “Sémillon” is a white grape grown mostly in France. “Tsukemono” is a Japanese-style pickled vegetable. “Yuba” is the skin that forms when soymilk is heated; it is then removed and dried in sheets. “Zwieback”, oven-crisped bread, is the last entry in Companion. But this entry does not denote the end of the book: the appendices are helpful too, especially an extensive list of different types of pasta.

For this blog? I decide to make a rösti. In Switzerland, rösti means “crisp and golden”, like fried foods browned on both sides. Usually it refers to potatoes, as in, “Rösti Potatoes”. These are like potato latkes and common hashbrowns.

I search online for “rösti potatoes” and find many recipes for this dish. And all the recipes are different! The potatoes might be grated, julienned in a food processor, or sliced by hand; they might be fried in butter or oil or a mixture of both; a lot of fat might be used or very little. I choose a recipe for Pomme Rosti on ChefSteps, largely because the photos are so great.

In this ChefSteps recipe, the potatoes are sliced thin (1 mm) in a mandolin. Then, the slices are stacked and sliced thinly again into strips (see the photos on the website). I used a food processor to slice the potatoes, took them out and stacked them, and sliced the stacks into strips by hand. Mine were not as neat as theirs!

Next, the potatoes are rinsed in water, drained, and blotted dry. In a bowl, you add about a cube of melted unsalted butter and some salt to the potatoes, then pour the mass into a heated non-stick pan and lightly brown on one side by cooking for about 5 minutes. The pan is then put into a 375˚ oven for 10-15 minutes until the potatoes are well browned on the bottom. The pancake is turned to cook the other side for about 10-15 minutes. On the ChefSteps site, the potato pancake is actually flipped in the air above the pan! No way could I do that. I would have had potatoes all over the kitchen.

My rösti did not turn out as pretty as the ChefSteps one, but it tasted very good. We scarfed it all up. 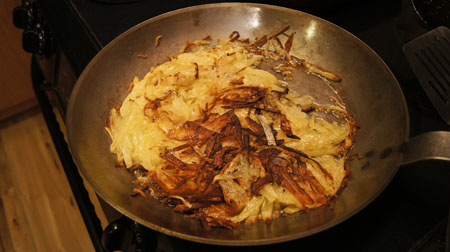 Would I make it again? No, not this exact way. For one, it was way too rich with all the butter. Second, I need to use a different pan to brown them, either a non-stick or a cast iron pan (I used my newish and not well seasoned Matfer black steel frypan). I think I should have pressed the potatoes more firmly into the pan while they cooked. I feel that there was much water in the potatoes – they sputtered as they cooked. When I make potato pancakes, I spin them in a salad spinner to get rid of the excess water; this same technique could be applied to a rösti. And maybe the butter mixed in with the potato shreds prevented them from forming a solid mass. It’s back to google searches or searches in my own cookbook library for the next time I make rösti potatoes.

But I’ll keep this book! I highly recommend it.

Note: The latest edition of Food Lover’s Companion, the fifth, was published in 2013.