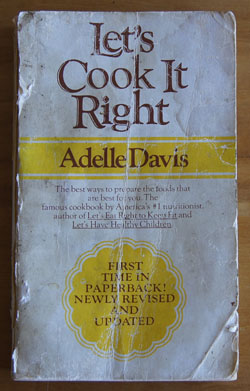 Adelle Davis. I remember this author as one of the gurus of the health food movement back in our hippie days.

My copy of this book is well-worn. I keep it in the kitchen as a reference for cooking meats because it has good roast-cooking time tables. I always cook turkeys according to her directions: stuffed and on a rack with the breast side down. Each Thanksgiving since 1995, I have left a note on a piece of paper tucked between pages 54 and 55 of this book. On each note is how I cooked the turkey, and how it turned out. 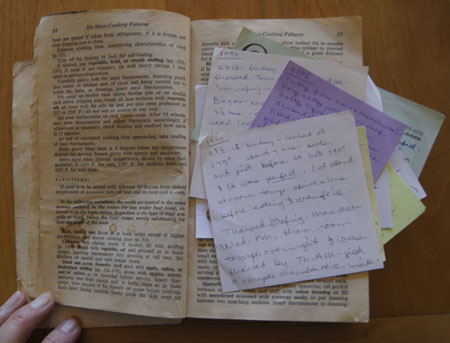 “Dedicated to my daughter, Barbara, in the hope that here husband and children will not have to eat TV dinners.”

I haven’t actually read this book in decades. I recall Davis as being a bit “preachy”. But I liked her, partly because she – like me – earned a masters in biochemistry. This week I take some time scanning through Let’s Cook it Right. From the preface:

“Surely we all agree that our foods should be both delicious and sufficiently health-building to enhance our enjoyment of life; and that dishes which are good for you but almost impossible to eat deserve little praise. Since we spend approximately a thousand hours each year eating our meals, they should be pleasant hours, times of family unity and companionship.”

Davis stresses that we need to buy nutritious foods and then cook them correctly to preserve the nutrients. And she assumes the cooking is done by the woman of the household, as in:

“Despite the need to retain maximum value in all food preparation, women are advised by thousands of recipes to extract and discard nutrients or to destroy them by high temperatures, long cooking, or the incorporation of air”.

The tone of Adelle Davis’ writing is serious and didactic: women must learn how to cook properly so that they do not ruin or toss nutrients. Her reward for this work:

“When she hears her physician praise the beauty of her children, when she sees her husband, young beyond his years, succeeding because of his energies, when she feels the surge of vibrant health in her own body, she will realize that she is largely responsible. She has shouldered her tasks and has seen to it that good health has come from good cooking.”

Once I get past the preachiness and non-feminist ideas, I do like many of the concepts in this book. “You Need Have No Failures in Cooking Meats” is the chapter I have used the most. “Serve Your Salads First” is a firm and steady rule of my household, just ask any member of my family. In “Get Acquainted with Fish” she asks: “How many hundreds of tmes have you heard housewives remark, ‘I don’t cook fish because I don’t like the odor in the house’? The fact is that when fish is properly cooked, there is no odor.” Davis’ advice for cooking fish at low temperature helped me keep fish odors to the minimum.

Let’s Cook it Right leans heavily towards protein-dense foods. Adelle Davis frowns on sugar, and writes that if a person is sedentary, they should only eat 1 slice of bread per day. The chapter on bread is titled “If You Want to Bake Bread”. In her opinion, one should buy whole wheat bread loaves rather than bake it at home. I am the opposite – I love home-baked bread! From my notes in this cookbook, I can tell that I tried her whole wheat bread recipe, but I did not write whether or not it turned out. There are almost zero cake recipes in this version of Let’s Cook it Right. In the chapter on desserts, “Desserts Can Contribute to Health”, Davis writes: “Frankly, I have never been good at baking cakes.”

This excerpt from the bread chapter illustrates the tone of Davis’ writing:

“Never shall I forget a dinner to which a friend invited me, saying, ‘I’m going to prepare everything from your cookbook.’ It was her first attempt to use whole-wheat flour and powdered milk. She had tried to make yeast bread of rancid pastry flour and still more rancid wheat germ, purchased from a market where the turnover was slow. She had added to the bread powdered milk which should have been sweet-smelling and as fine as face powder but which had an offensive odor and looked like crushed rock; such changes occur when powdered milk has been left exposed to the air. It was impossible to say who was the more embarrassed, my hostess or myself. We ate cold cereal, however, and remained friends. But I shudder when I think of how many other hosewives may have unknowingly obtained products of inferior quality.”

Davis would be amazed to walk into today’s stores with their abundant fresh whole grain flours, not to mention the ready availability of responsibly grown beef, pork, and chicken products.

(I note this with some distress: Davis writes that if we are enjoying the aroma of something cooking, we should be aware that the nutrients are leaving the meal along with the smells.)

In Let’s Cook it Right, Adelle Davis does not toute vitamin supplements. But apparently that is not true of all of her writings. On Quackwatch, the article “The Legacy of Adelle Davis” by Stephen Barrett claims that her recommendations of supplements for certain conditions were sometimes dangerous. From Wikipedia: “She . . .  became the most recognized nutritionist in the country. Despite her popularity, she was heavily criticized by her peers for many recommendations she made that were not supported by the scientific literature, some of which were considered dangerous.” On the other hand, the Adelle Davis Foundation is entirely positive about her contributions and continues her legacy.

For this blog, I turn to the chapter “You Need Have No Failures in Cooking Meats”. Adelle Davis presents a wonderful way to cook a beef roast. You put it in a 300˚ oven for an hour, then turn the oven down to the temperature you want it to end up at (or turn the oven off) and leave it the entire day. Come home and the roast is cooked to perfection, evenly medium-rare pink throughout. I used to do this all the time! It’s great for the working person, and it’s also great (according to Davis) for keeping nutrients in the meat. This method is similar to sous vide, in that you slow cook the meat by setting the cooking device – the oven in this case – to the desired finished temperature.

(No scan of this recipe; Davis’ method is explained in a two-page section titled “Slow Roasting”.)

In the spirit of Adelle Davis, I buy a responsively grown 4 pound beef rump-round roast at Whole Foods. (She would not have approved of the cost, however!) 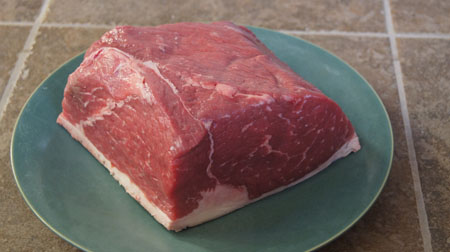 In 2015, I have an oven that I can set to any temperature from 100˚ to 550 ˚ F. This should work even better than the oven I had back when I first explored this method, as that oven did not have low temperature settings.

If the meat has more than 1/2 inch of fat on it, trim some of the fat off. Season the roast with salt and pepper (Davis says not to salt the meat; I disagree). Rub a little oil over the surface of the roast. Place the roast in a roasting pan, on a rack if possible. Do not cover the roast. Insert a meat thermometer in the center of the roast.

Place the roast in a preheated 300˚ oven for 1 hour (to destroy bacteria on the surface). Then, turn the oven down to internal temperature that you desire. (If your oven does not have a low setting, simply turn it off. It should work.) Do not open the oven door!

For a rare-cooked roast, it takes about 2 1/2 hours per pound.

When the meat has reached the internal temperature that you want, take it out and serve. 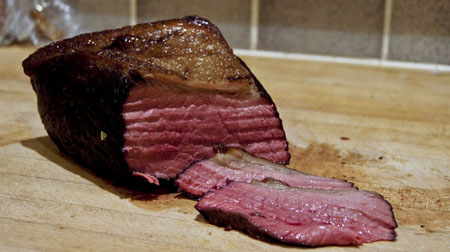 Mine turned out perfect! I cooked it to rare. It was evenly pink throughout, just the way we like it! Good the first night with mashed potatoes and gravy, and excellent sliced/shaved very thin for sandwiches the next several days.