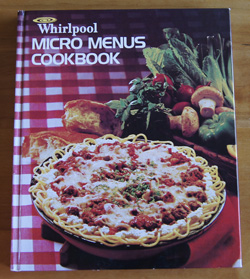 This one’s easy! I’m not going to keep this cookbook. But it did bring back some memories.

My mother’s brother – my Uncle Lee – got one of the very first microwave ovens. I remember that it was expensive. It must have been in the 1960s, since I was still living at home. We shook our heads at my uncle’s foolishness for wasting his money on such an unproven product. My family all thought my uncle was looney anyway; this was just another in a litany of “bad decisions” he had made.

Researching the web today, I find that the first microwave ovens produced for home counter top use were the Amana “Radaranges” (and this link), in 1967. During the 1970s, microwave ovens steadily declined in cost and many American families decided to buy one. Most people raved about how convenient they were. Not everyone was convinced, though. For instance, me. At the time I was heavily into “natural” cooking, and I just didn’t trust them. In 1975, articles like this one reported that the FDA recalled thousands of microwave ovens due to radiation leakage. Health food nuts claimed they caused cancer and blindness and who knows what else.

My sister, a few years older than me and a working mom at the time, got a microwave oven. Hmm, she and her kids seemed okay. Safety regulations were put in place, and finally even I was convinced of the ovens’ safety. Perhaps partly because I was working in a lab where we used one to melt agar for bacterial plates (and heat up our lunches, right on the lab bench). I think we had the university periodically test the lab’s microwave oven for leakage, although my memory is a bit sketchy. I do remember that our lab helper put an unpeeled hard boiled egg in the microwave and it exploded and made a horrible and stinky mess.

In 1981 we built our own home. To help finance this endeavor, I went back to work full time, even though my firstborn was only six months old. The one thing I demanded was “a microwave oven to save time in cooking”. And so we bought a Whirlpool microwave oven. It had manual controls, nothing digital, and it lasted over 23 years, until I replaced it (even though it sort of worked) with a microwave-convection oven in 2004.

I bought the Whirlpool Micro Menus Cookbook just after I got that first microwave oven. Today I have three such books, and I’ll keep the one that has the best guides for microwaving different types of foods. This book is not the one I will keep – I peeked at my other microwave books and I like their guidelines better.

The book goes a little overboard in the use of the microwave in cooking meals. It begins with cooking a meal of meat loaf, twice baked potatoes, broccoli with cheese sauce, and a pudding, all in the microwave. The microwave is used for every step, even cooking the onions for the meat loaf. That’s a ton of microwaving steps. These days most of us use the microwave only for thawing foods, heating leftovers and burritos, melting cheese, boiling water and the like – not for entire meals.

I searched the book for a recipe to try. Most recipes are the conversion of current (1970s) American standbys to microwave cooking. While searching, I found a post-it and an index card tucked next to the cookbook’s recipe for cinnamon rolls (the microwave can be used in the rising step of yeast breads). The index card is handwritten in my own writing, and I recognize the recipe as my mother’s one for cinnamon rolls. I had been looking for that recipe just last December! I am so happy to have found this recipe!

My blogging is successful. I don’t really expect more than a handful of people to ever read this, but on a personal level, I have accomplished something. I have found a lost and treasured recipe. And, I am getting rid of cookbooks! Just yesterday I pushed in the bookend to close the gaps on the bookshelf.

Okay. So the recipe I tried is “Brown Betty Contemporary-Style”. This recipe seems a little out of place in this cookbook, since it includes honey, oatmeal, whole wheat flour, wheat germ, and sunflower seeds; most of the recipes do not include seeds and whole grains. This dessert takes less than 15 minutes to cook. One of my most common Saturday night two-person desserts is some sort of fruit crisp, cobbler, betty, crumble, or buckle. Briefly, these are baked fruit desserts, topped with a mixture of flour, spices, and a little butter or other fat.

The recipe is below. I am not going to include it in my recipe index because I would not make it again as it is written. 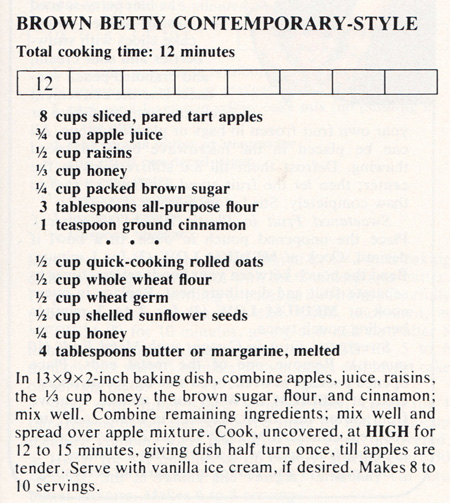 I did like the flavor and texture of this dessert. The honey and sunflower seeds made it taste like a healthy cookie or energy bar. But the top of the “betty” was pale and unappetizing. (I served it with frozen vanilla yogurt to cover it up.) Next time, I would bake this in a conventional oven for at least 30 minutes. That way, it should look better, have more crunchiness, and fill the kitchen with the aroma of cinnamon and apples as it bakes. I am adding it as a “work in progress” to my personal recipe file. 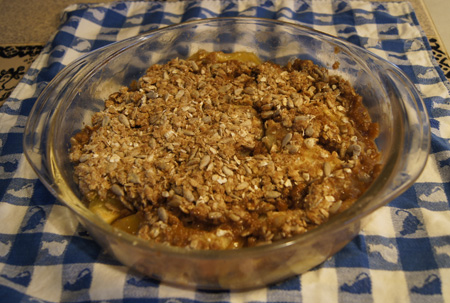 Here are some nostalgic photos from this book. I love looking at how the women dressed in past decades. This book went to press in the late 1970s – note the dresses and hairdos. (Wasn’t me! I was in blue jeans and favorite T-shirts and my hair was long and uncoiffed.) Compare and contrast these photos with those in the 1964 Bake-Off Recipes cookbook. 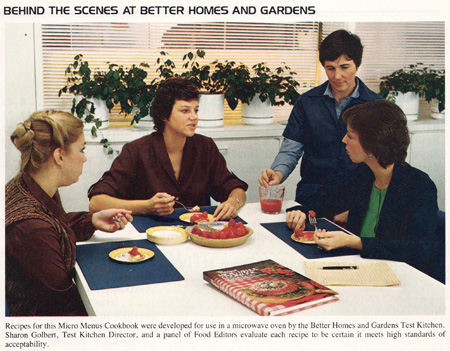 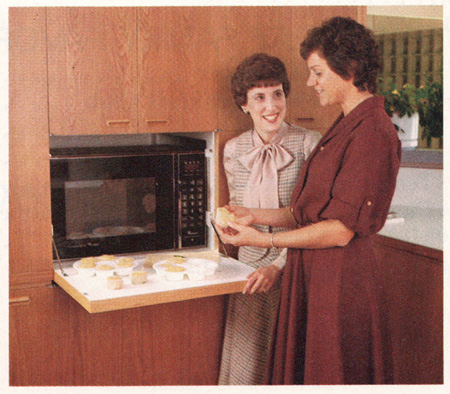