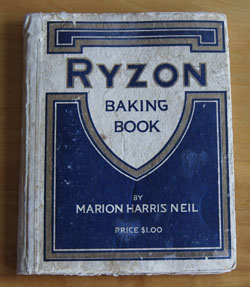 1917! This was my grandmother’s cookbook. She turned the pages when my mother was only one year old. On one page there are crayon marks: Could they have been made by Mother? On another page my grandmother wrote some math calculations. She was good at math.

The book is a bit water-wrinkled with a few sugar stains (and crayon marks) but otherwise in pretty good shape. It’s hard-covered, unusual for an advertising booklet. “Price $1.00” translates into $20.24 in today’s inflated dollars. Another blogger wrote about this cookbook too: The History of Food and Drink Collection, What’s Cookin’ @Special Collections.

“Ryzon”, what’s that? Ryzon was a brand of baking powder sold for a few years in the early twentieth century.

Baking soda is another leavening agent. It is sodium bicarbonate, a weak base that can be found in natural deposits. When baking soda is mixed with water, flour, and a small amount of an acidic ingredient like sour milk or vinegar, it too releases carbon dioxide on heating and causes breads and cakes to rise. Baking soda was used by the ancient Egyptians for paints; by the mid-eighteenth century it was used for baking. Baking soda breads tend to have a distinctive flavor of their own because one ingredient must be sour.

Baking powder was introduced to the cooking public in the mid-nineteenth century. It is a dry mixture of baking soda and a weak solid acid. This acid can be one of several phosphate or sulfate compounds:

Cornstarch is added to the weak base-weak acid mixture to keep the two from combining (and reacting) on storage. The cornstarch also keeps the baking powder from clumping. Percentages: baking soda 30%, weak acid 5-25%, rest is cornstarch.

Baking powder gives virtually no flavor to baked goods (although some may argure this point, see the next paragraph) and bakers don’t have to include an acidic ingredient in the batter. It is simple to use because you don’t have to wait for a dough to rise. That’s why breads leavened with baking powder/baking soda are called “quick breads”.

Cooks are often picky when it comes to their choice of the weak acid used in the baking powder product they use. Some don’t like aluminum-acid containing baking powders because the aluminum lends baked goods a metallic taste; some believe aluminum is not be good for your health.

Some baking powders are “double acting”, meaning they contain two different weak acids, one that starts acting as soon as water is added and one that doesn’t act until it is heated in the oven.

What kind of baking powder do I use? I generally use whatever brand my local supermarket sells. Currently I have an open can of Clabber Girl Double Acting baking powder in my cabinet. The acids in this brand are sodium aluminum sulfate and monocalcium phosphate. I also have a new can of Bakewell Cream (purchased from King Arthur Flour) that includes only the weak acid sodium acid pyrophosphate (although they claim it is double acting).

All this might be boring to you, but for me – as a chemist and as a cook – I liked reviewing a baking process I use all the time.

Here are some take-home lessons to help our quick bread baking:

I decide to make Ryzon Gingerbread for this blog (and for us!). 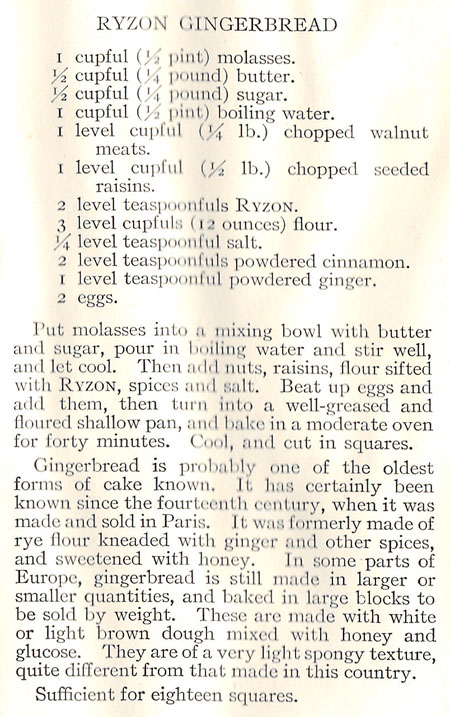 Note the bit of history in the above clip: “Gingerbread is probably one of the oldest forms of cake known. It has certainly been known since the fourteenth centure, when it was made and sold in Paris.”

I have always liked gingerbread, but I don’t make it a lot. In fact, I don’t even have a “go to” recipe for plain old gingerbread (I do make a great Apple Gingerbread Cobbler). This Ryzon recipe has lots of molasses in it, which is considered a healthy-ish sweetener. (I am surprised at how many of the recipes in this Ryzon cookbook are called “health breads” and have whole wheat flour in them.) And it has nutritious raisins and nuts. The recipe calls for “a shallow pan” – I chose a 9-inch square pan and it worked fine. A “moderate” oven is 350-375˚ – I chose 375˚. Below is my version.

Combine the molasses, butter, sugar, and water in a pan and heat gently (with stirring) on the stove until the butter melts. Remove from heat and let cool.

Combine the nuts and raisins on a cutting surface and chop roughly. (You can, of course, chop them in any way you like.) Add the nut/raisin mixture to the molasses mixture. Stir together the baking powder, salt, cinnamon, ginger, and flour and then add it to the nut/raisin/molasses mixture. Beat the eggs and add them too.

Pour the batter into the prepared pan. Bake at 375˚ for 40-50 minutes, until it is nicely browned and pulls away from the sides of the pan. 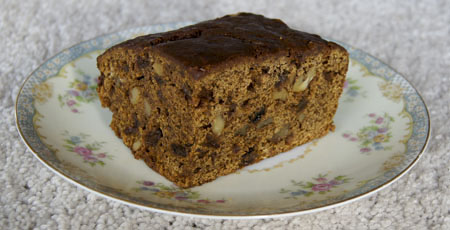 I really enjoyed this gingerbread. Gingery and molassesy. And dense with nuts and raisins. We had it for dessert with cool whip. It’s also good for snacking during the day, and for breakfast!

Note: after writing this post, a friend alerted me to posts on the Serious Eats blog on baking powder and baking soda. Excellent discussions.

I liked the way the book lay open on the counter: 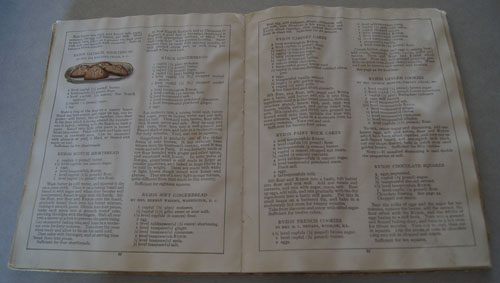 I also like the page that describes how to measure a level teaspoon and the two inside-cover pages from the back of the book that talk about the General Chemical Company factory. 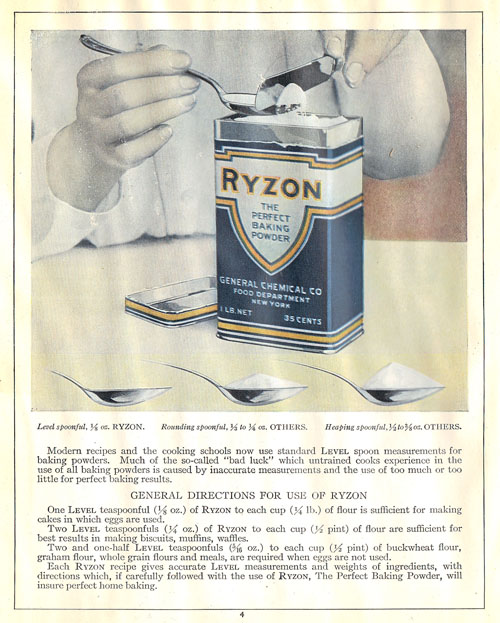 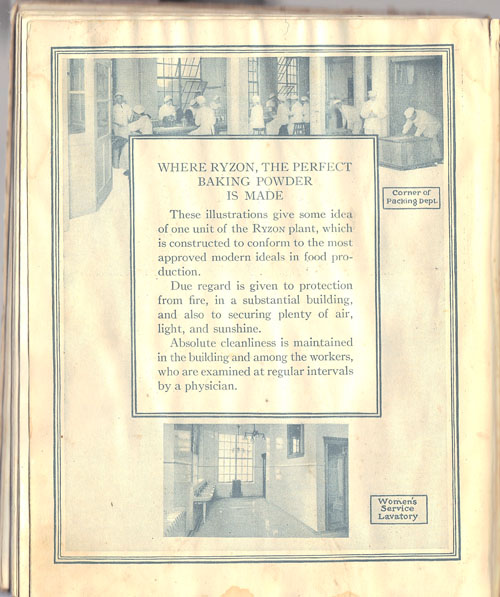 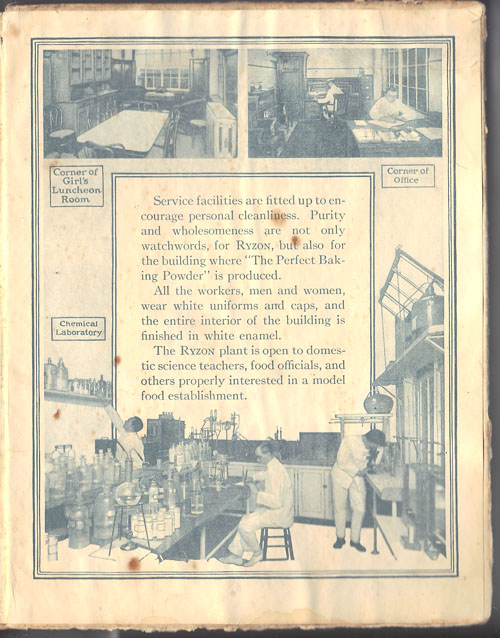