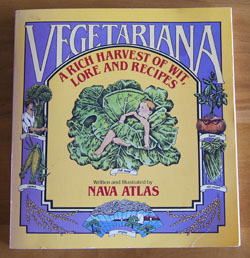 “A rich harvest of wit, lore and recipes” continues the title. Yup, that’s this book! It has sat too long on my shelf. I am entranced with the illustrations and quotes:

“Of Soup and Love, the first is best”
“Ther ought t’be some way t’eat celery so it wouldn’t sound like you wuz steppin’ on a basket.”
“In the early Greek and Roman eras, beans were widely used as ballots. Casting a white bean signified an affirmative vote, whereas a dark bean was a negaitve vote.”
“Training is everything. The peach was once a bitter almond; cauliflower is nothing but cabbage with a college education.”
“Ginger sharpneth the sight, and provoketh slothful husbands.”

As I turn the pages of Nava Atlas’s book, I get hung up on reading and pondering all these non-recipe “extras”. I can copy a few quotes and a bit of lore, but I can’t show you all the illustrations (copyright issues and/or laziness on my part). Happily, Amazon will let you view some of this book (click on ‘Look Inside’).

Shame-faced, I haven’t tried many (or any?) of the recipes. I have always meant to take a day a week and cook no-meat meals. But it never really happens (and I can only blame some of this on my partner-in-eating).

I turn to the Introduction. Atlas begins: “‘What on earth do you eat?’ was a question I was often asked when I first became a vegetarian in the early 1970s. Even then, a meatless diet was not as widespread and accepted as it is today.” As a child, she didn’t have to be urged to “finish your vegetables” but to “eat your meat”. Meat just didn’t appeal to her. “It was not until I was sixteen years old that I was ‘adult’ enough to assert my way in the kitchen and delare myself a vegetarian. At first, this decision was not met with cheers from the family.”

She is a delight. And informative: “Many of my generation believe that vegetarianism sprand up in the 1960s and blossomed into the new age of health consciousness of the 1970s. However the roots of vegetarianism run as deep as ancient India, classical Greece and Rome, and the Old and New Testiments of the Bible. More recently, but perhaps even more obscure is the story of the almost concurrent, widespread vegetarian movements in ninteenth-century America and England, attracting scores of pominent writers and reformers.”

So us hippie baby boomers weren’t so groundbreaking. Funny how each generation thinks they are the first to discover the world.

Happily, Nava Atlas is still writing, and enchanting us and sharing recipes. Do visit her website: VegKitchen with Nava Atlas.

I choose to make “Swiss Cheese or Gruyère Pancakes”. Cheese goes right into the batter of these crepe-like pancakes. Atlas suggests serving them with “Summer Harvest Squash Saute” (butternut and summer squash and zucchini sauted in butter with wine, soy sauce and herbs), filled with steamed vegetables, or sauced with Onion and Garlic Sauce. 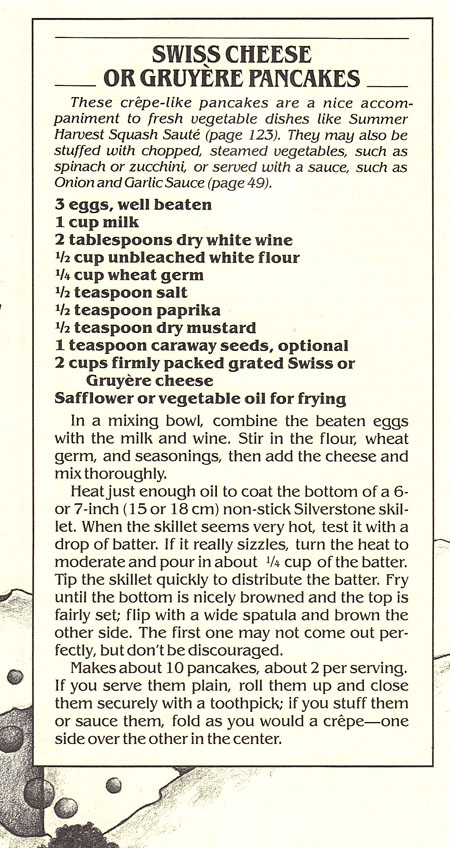 I plan to stuff them with steamed vegetables. I made a half recipe; since it is hard to “halve” an egg, I beat up two eggs, weighed the total, then used 3/4 of the amount (this translated to 75 grams of beaten egg.) The remaining egg went into scrambled eggs the next day.

These cook up like crepes, so that is what I am calling them in my version of this recipe, below.

Combine the eggs, milk and wine. Stir together the wheat germ, salt, paprika, and mustard, then add to the egg mixture. Stir in the cheese.

Heat a pan until a drop of batter or water sizzles when dropped on it. Turn the burner down to medium to medium-high because these crepes brown a bit easier than most due to the cheese in the batter. Add a little butter or non-stick spray, then pour about 1/4 cup of the batter into the pan and tilt the pan so the batter spreads. Cook until brown, then flip and briefly cook the other side. Continue until all the crepes have been cooked. 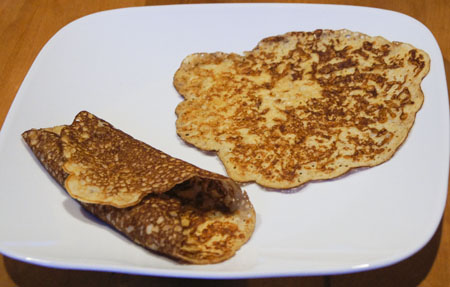 I served them with a medley of steamed vegetables. I would also love these wrapped around cooked, creamed or plain spinach. 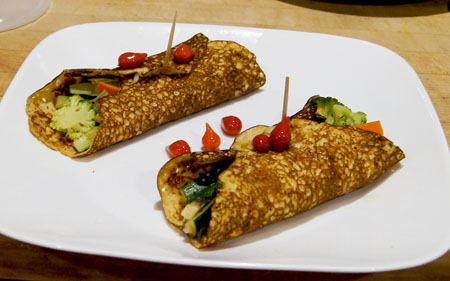 I added cooked salmon to the meal to satisfy our non-vegetarian cravings. Later in the week I used one like a taco, filled with ham and tomatoes and lettuce. Delicious!