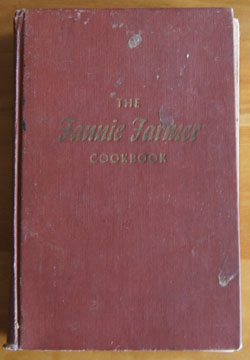 I think I found The Fannie Farmer Cookbook in an old house that we lived in from 1975-76. The house, known as “Walnetto” in our group of friends, was on Walnut Street in Boulder, at about 21st. The backyard of the house stretched back to a creek. We had a big garden. Chickens. Volleyball games. Parties. We could walk to downtown bars. I rarely drove my old VW bug because I could walk up to the university where I was a grad student. Once the house a couple doors down was on fire, and my boyfriend-now-husband pulled an elderly woman to safety.

Of course those times are gone and the land is now covered with apartments and condos. But we have our memories.

So what is The Fannie Farmer Cookbook? It’s important enough in American cooking history to have its own Wikipedia entry. I learn that Fannie Farmer, born in 1857, was raised in a family that valued education, but could not attend school because of a crippling illness as a teen. So she started cooking at a boarding house at her parents home. Her interest in cooking took her to the Boston Cooking School, where she excelled as a student and eventually became school principal.

Fannie’s food interests covered nutrition, diets for the sick, sanitation and cleanliness in the kitchen, the chemical analysis of food, techniques of cooking and baking, and managing the kitchen and household. These “domestic science” topics were part of a movement in the US around 1890, and Fannie was there at the right time with the right interests and intelligence and the right – spunk! In 1896 she wrote her first book: The Boston Cooking-School Cook Book. (I have a copy of the 1906 edition of that book on my bookshelves – still to be covered in this blog.)

(The practice of “domestic science” – nutritious foods and clean kitchens and efficient homes – improves the lives of families and individuals on a daily basis. It got a bad rep in the hippy/women’s lib movements as being yet another gender-defiining ploy: “let the girls stay in the kitchen”. Women in my generation knew domestic science as “home economics”, or “home ec”. Most girls – me included – took home ec in junior high.}

Fannie Farmer left the Boston Cooking School in 1902 to continue her teaching at Miss Farmer’s School of Cookery. She lectured on diets and nutrition for the sick at Harvard Medical School. “To many chefs and good home cooks in America, her name remains synonymous today with precision, organization, and good food” reads the current Wikipedia entry.

My 1965, eleventh edition of The Fannie Farmer Cookbook has been revised many times:

Note that Fannie’s last edition was the 1914 one; Cora D. Perkins revised from the editions from 1915-1929 and Wilma Lord Perkins 1930-1965. After 1965, a few other editions were published; Marion Cunningham is listed as the author from 1979 on. I think the last issue was the 1996 Anniversary Hardcover edition.

This is the first time I have really read my copy of The Fannie Farmer Cookbook. The writing style is friendly and clear and to the point. (One of my favorite American-standby cookbooks, The Joy of Cooking, tends to be a bit bossy.) It’s well organized and the index is almost 100 pages!

I am impressed with how the recipes still stand today as cookable. The clam chowder, with fresh shucked clams and salt pork, is a recipe I’d like to try. Roast guinea hen with a slice of bacon inside and more laid across the top also sounds interesting. Classics of American cooking like Boston Baked Beans. Alligator pears? Avocados! Recipes for leftover chicken and turkey. Sauerbraten and potato dumplings and Alfredo’s noodles. Cinnamon apples.

My favorite sections of The Fannie Farmer Cookbook are dessert recipes. I learn that “cottage pudding” is a classic American cake that can be frosted and/or filled. Fruit desserts include grunts and dowdies and dutch apple cake, cobblers and upside down cake. All of the recipes are made from scratch. I do like this book!

I am going to make Apple Dumplings. At first I thought that the “dumpling” would be boiled but no, these are kind of like a baked apple wrapped in shortcake-biscuit dough and doused with sauce. 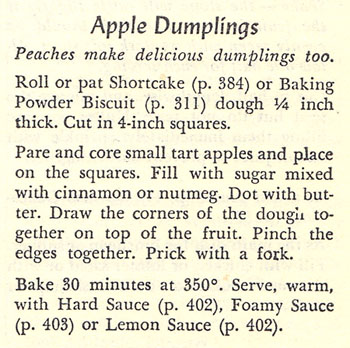 As these were baking, my daughter said these would be best with ice cream. So I didn’t make the following hard sauce, which is simply a frosting made from butter and powdered sugar. 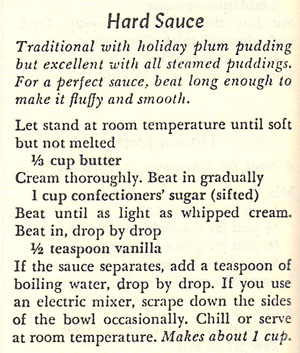 Apple Dumplings
makes 5; best if you serve one per person! 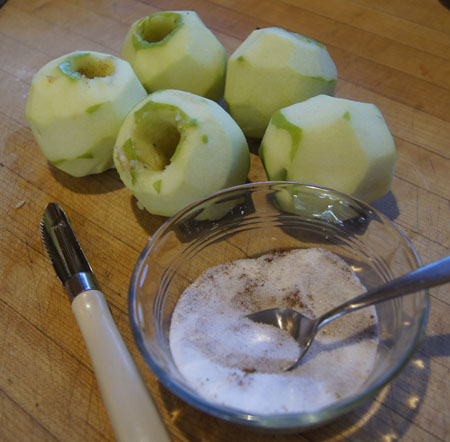 Stir together the flour, baking powder, salt, sugar, and nutmeg. Cut in the butter with a pastry cutter or your fingers, or use a few pulses in a food processor.

Stir in the milk, little by little, until the dough holds together but is still soft. Turn out on a floured board (fold over a few times if necessary) and roll to 1/4-inch thickness.

Divide the dough into 5 equal pieces and roll each to a size that will wrap up and around one of the apples. My rolled dough wasn’t really a square, it was more free form. 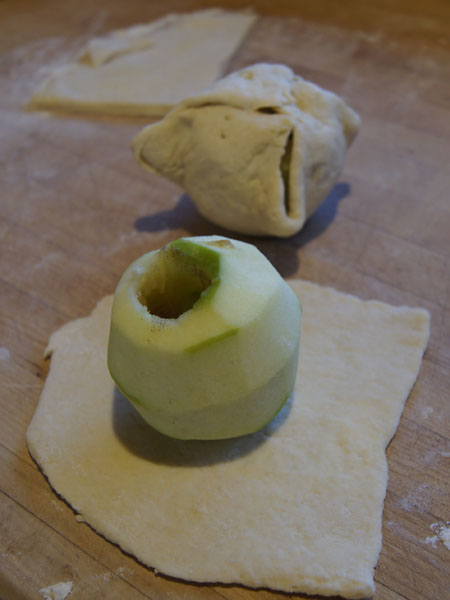 Place an apple on a piece of dough and fill the apple with some of the sugar-spice mix. Dot the inside with a little butter. Fold the dough up from four opposing sides and pinch together over the top of the apple. Continue until you finish all the apples and dough.

Place the apples in a baking pan so they are not touching. I sprinkled some of the remaining sugar-spice mix on top of the dough and highly recommend this step.

Bake at 375˚ for about 45 minutes, until the dough is golden brown. Serve warm with ice cream. 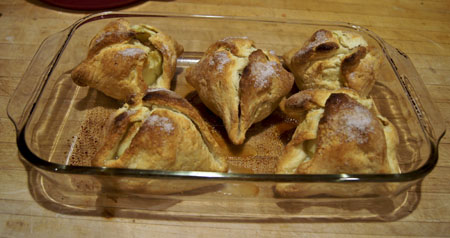 Great great great! These are delicious. So fun and different. We had never had anything like it before!

It will be interesting to compare The Fannie Farmer Cookbook with my 1906 edition of Farmer’s The Boston Cooking-School Cookbook. How much of the friendly style is Fannie’s or the revision author? What were the original recipes? A post to look forward to.