Dammit, I made a mistake! I took Healthy Bread Recipes off the shelf and chose a recipe for “Anadama Bread” to make for this blog. Only after I had made the bread did I discover my mistake: I’ve already covered this cookbook!

The bread was very very good, so I decided to go ahead and share the recipe.

I love the name for this bread: “Anadama” from “Anna, damn her!” According to Healthy Bread Recipes:

“Colonial American folk stories about the name Anadama accredit Anna’s husband for this bread. The hungry fisherman returned home to find Anna gone and a supper of cornmeal mush and molasses. The legend is he cursed her while preparing his own bread from the meal.”

(Wikipedia gives a slightly different version of the legend.)

This bread has a rich and hearty flavor, and is great in sandwiches, as peanut butter toast, with stews and spaghetti. It’s good and healthy enough to qualify as a “daily bread“, and it makes me wonder why I don’t vary my old standby more often.

(This recipe is written for a bread machine.)

With the bread machine off off, put the boiling water in the pan, then add the oatmeal and cornmeal and stir to mix. Let stand 20 minutes.

Add the remaining ingredients and select a dough cycle that has a rising step. When the cycle is complete, remove the dough and place in a large loaf pan.

I baked my loaf at 385˚ for 25 minutes; the bread did not look done and I when tested it with an instant read thermometer, it was about 145˚. The loaf was already pretty brown so I turned the oven down to 350˚ and baked for another 20 minutes. It tested close to 198˚ and was perfect. Well, it rose a little too high! But the texture was great throughout. 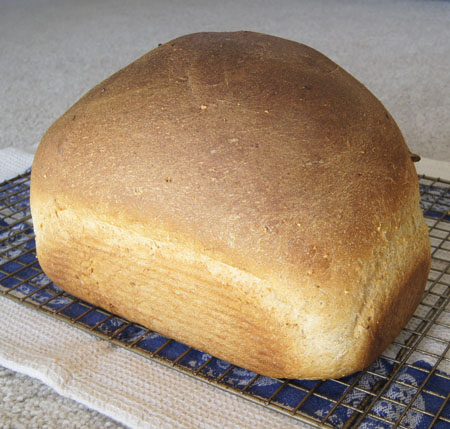