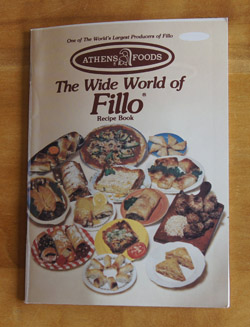 I shake my head at myself. Why did I call this little pamphlet a “cookbook”? It’s only 5.5x4x.12 inches. But I did, back when working on my cookbook database from 2006-2012, leading to my “250 Cookbooks”. So I have to stick with it. A bit obsessive. (I am reading 600 Hours of Edward. Edward is afflicted with OCD and each morning when he wakes up, he records the time [usually 7:38 am] and totals and writes down the number of days in that year that he has woken up at the same time. I totally get it. I get up each morning at exactly the same time. I am involved with databases.)

Small as it is, this pamphlet has about 50 recipes using fillo dough and helpful instructions for working with this thin pastry.

“Fillo” is usually spelled “phyllo” or “filo”. Phyllo is a wheat dough stretched into paper-thin sheets. Wikipedia: “The practice of stretching raw dough into paper-thin sheets probably evolved in the kitchens of the Topkapı Palace”. Hey, I’ve been there! The Topkapi Palace is in Istanbul, Turkey. We visited it in 2013. During our stay in Turkey, we often enjoyed phyllo savory entrees and sweet desserts.

I have stayed away from phyllo dough recipes, thinking them fraught with calories, because you brush butter between the layers of dough before you bake it. But the introduction to The Wide World of Fillo claims that only 2 tablespoons of butter is used per sheet of pastry, resulting in a dish that is “much lower in calories” than comparable fried dishes. I’m still not convinced that this is true. It’s hard to estimate how many calories are added when deep frying. But I don’t enjoy deep frying – too much splattering. An alternative is welcome.

Although phyllo is traditionally used in Mediterranean dishes, this cookbook shows how it can be used in Asian, Mexican, and American cooking. I decide to try a recipe for an Asian food that I usually deep fry: egg rolls. I have tried – with little success – baking egg rolls wrapped in traditional egg roll skins. I did successfully make egg roll crepes in this blog. Maybe phyllo egg rolls will be another alternative to deep frying. (Though it seems weird using an Ottoman cooking method to make a Chinese dish.) 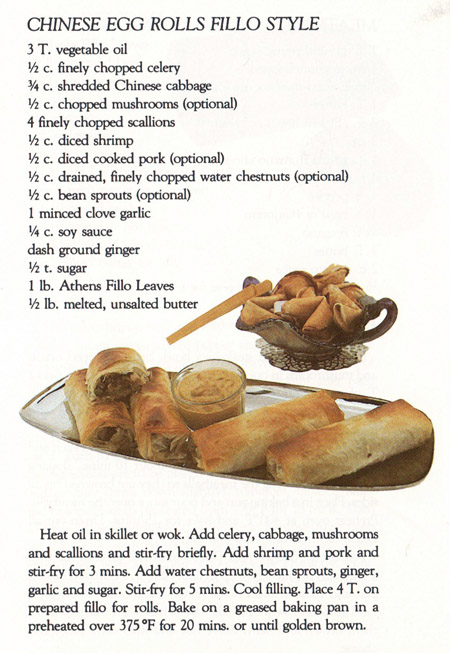 Note that the directions in the above recipe do not tell you when to add the soy sauce. I’ll add at the very end of the stir-fry cooking.

The pamphlet gives the following instructions for forming rolls from a sheet of phyllo dough: 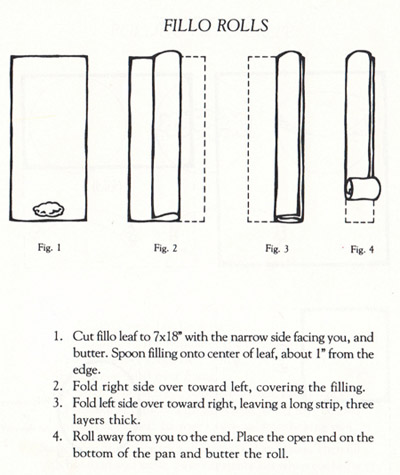 Feel free to swap up any ingredients in this recipe. The amounts stated yield about a dozen rolls. You can use any vegetables you have on hand, and include pork or shrimp or any other meat. Consider the recipe below a rough guide.

Stir-fry the celery, cabbage, mushrooms, carrots, and green onions in a little hot oil for a minute or two. Add the shrimp and pork and stir-fry just until the shrimp is done. Add the water chestnuts, bean sprouts, ginger, garlic, and sugar. Add soy sauce to taste (and cornstarch if you want) and stir-fry until heated through. Cool to room temperature.

Lay out a sheet of phyllo pastry. I suggest laying the phyllo-sheet-rectangle out with a long side facing you, then making two vertical cuts to cut it into three pieces (see photos). Brush one of the third-sheets with butter, then place about a quarter cup of the filling just above the bottom edge, on the edge closest to you. Fold in the sides and roll up, or simply roll up. Place the roll on a parchment-lined half sheet pan and brush the top with butter.

I had a bit of trouble with the dough breaking, before and during the rolling process. The pamphlet suggests keeping the pastry sheets covered with a wet towel whenever you are not actively rolling it. That was hard to do! See my photos (below). 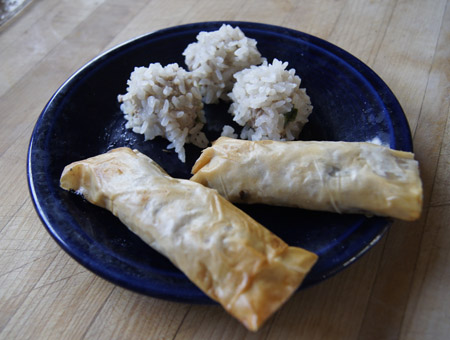 The egg rolls are golden brown and deliciously flaky. The filling is perfect. And those little rice covered balls? Those are my Pearl Balls.

These were delicious! They were still a pain to fill and roll up, though. That’s partly because I’m not real patient. As the book states, you should carefully remove a sheet and then constantly keep the dough covered with a wet paper towel. It dries out very quickly. And the dough sheets are so very delicate they want to tear if you just look at them.

I will advise you that it can take a while to gather and chop all the ingredients. Granted, I was making Pearl Balls at the same time, but you can see my efforts in the piles of ingredients below: 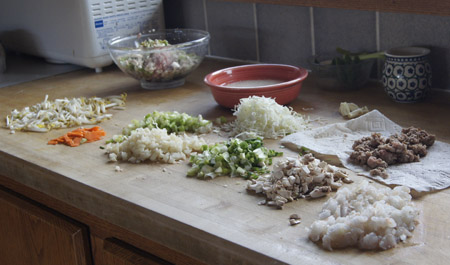 Here is the great stir-fried filling: 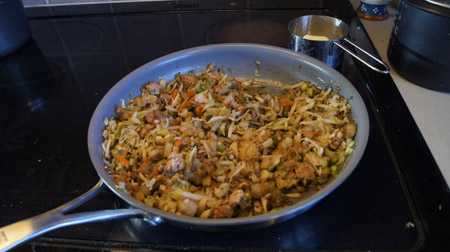 I was trying to take photos and butter dough sheets and fill pastries and deal with a couple total rolling failures all at once. I am sure I got a bit of butter on my camera. Anyway. In the photo below, I cut a piece of dough lengthwise into two pieces, then buttered them. Then I put about 4 tablespoons of filling above the bottom edge. 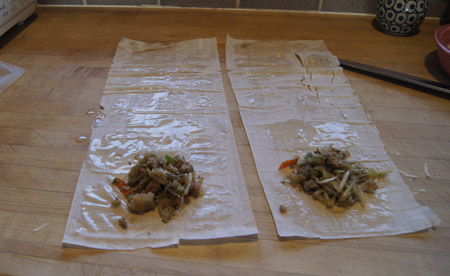 In the next photo, I have folded in the sides of one of the pastry strips and will next roll up the dough. 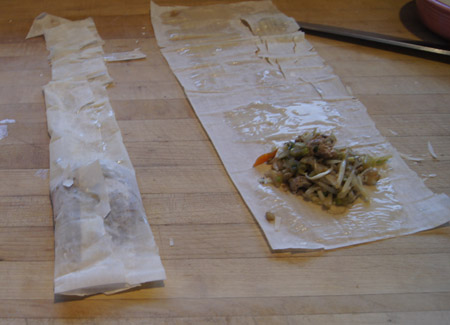 Failure! When I tried to roll up the left-hand one, above, it fell apart! The filling sogged out the bottom dough and it ended up a ball of pastry pieces and filling. What a mess. (Next time I’ll use a bit of cornstarch in the filling so it isn’t so wet.)

How did I solve the problem and roll up the rest of the egg rolls? I cut the pastry into shorter strips (thirds, cut on the horizontal, see below) and did the rolling process as quickly as possible and eliminated the fold-in-the-sides step. Here is the pastry, buttered, with the filling on the bottom: 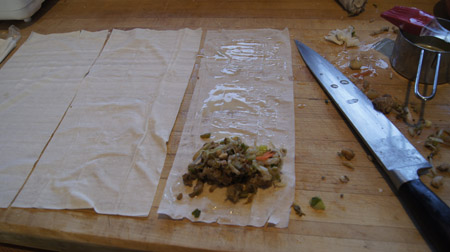 From here, I quickly rolled the filled sheet without folding in the sides. It wanted to soak through, but I kept rolling. When done, I cut off the ends. 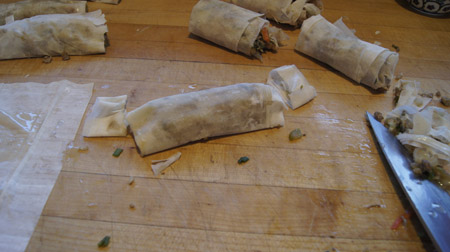 These baked up beautifully (the photo is up above). I would definitely make them again.

The original recipe said to use a pound of phyllo dough; I only used 4 sheets (plus the couple I ruined) which is only about a fifth of a pound. (I do like this larger filling-to-dough ratio.) I used about a quarter cup of butter, so that is about 400 calories total, or an addition of 35 calories per egg roll. I think if you are careful and neat, you could probably use even less butter. So maybe these are a lower-calorie alternative to deep-fried egg rolls. They sure are good.

Will I keep this tiny cookbook? I guess I will. It has good instructions for using phyllo dough and I might try another of the recipes someday.