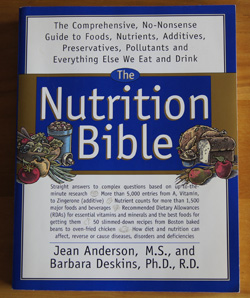 “The Comprehensive, No-Nonsense Guide to Foods, Nutrients, Additives, Preservatives, Pollutants and Everything Else We Eat and Drink.” This is a large, thick book that pretty much lives up to its promise on the cover. And it does it with attitude, which makes it fun to read.

Why would anyone need a print book with all of this easy-to-look-up information about foods? You can always search the internet instead. Aha! But what about when you have an extended power outage, and no cell phone coverage, as we did during the Lyons flood last year? And some entries I would never even think of looking up: aldacarb, ketoacidosis, keratomalacia, furcelleran, efamol, weisswurst. Twiinkies! The Pritikin diet. Hunger. Fudge. These are all discussed in The Nutrition Bible. Here is an example of an entry with attitude: 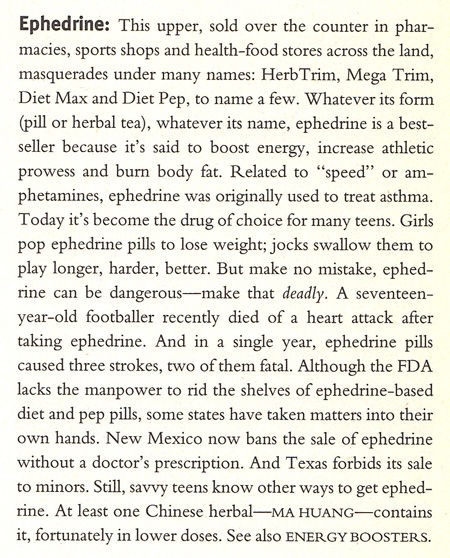 As a retired semi-scientist, I get a kick out of reading this “bible”. Plus, it has good nutritional information for the foods. Here is an example: 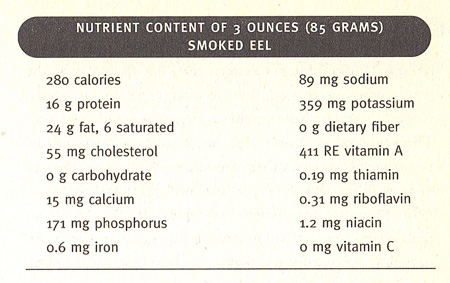 The authors of this book both hold degrees in nutrition. Jean Anderson, who earned a B.S. in food and nutrition and an M.S. in journalism, is the author of numerous cookbooks, including The Food of Portugal and The Grass Roots Cookbook. Barbara Deskins, as an associate professor of clinical dietetics and nutrition, wrote Everyone’s Guide to Better Food and Nutrition. References for specific entries are not footnoted, but an extensive bibliography is included in the back pages. And the author of one of the books in the bibliography? An old favorite of mine, Jane Brody, whose nutrition book I covered in a blog post.

This book also contains some recipes, interspersed throughout the encyclopedia-type entries. For this blog, I choose to make Lamb with Green Beans, Chickpeas, and Tomatoes. 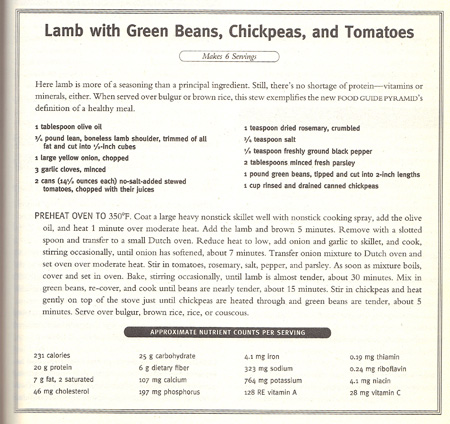 This recipe should be good for a cold winters day. Note that there are more vegetables in this dish than meat: the meat is more of a “seasoning” than a main ingredient. As we learned from our daughter who lives in Africa and from our own travels, in a large part of the world, meat is much less prevalent than in the US. And maybe that is a healthier way to eat. Anyway, I hope it tastes good. I made a few changes; my version is below.

In a stove-top-to-oven casserole (I used a LeCreuset), cook the onions in a little oil. Salt them a bit. When they are about done, add the garlic and stir for 30 seconds. Remove from the pan.

Brown the lamb cubes in a little oil. My lamb kept releasing water into the pan, so this took a little while.

Add the onions and garlic back to the casserole along with the tomatoes, rosemary, and parsley. Salt and pepper to your liking. Bring to a boil, then cover and place in a 350˚ oven.

Bake for 30 minutes. The lamb I used was really tender, so this was plenty of time. Add the green beans and garbanzos and put back in the oven for 15 minutes.

You can serve this lamb stew over bulgur, rice, potatoes, or couscous. I chose bulgur, a cracked wheat product that is common throughout the Middle East. We had it on our trip to Turkey. It is also spelled burghul, bulghur, burghul or bulgar. I bought some at the Mediterranean Market and Deli in Boulder. The package reads: Cracked Wheat Coarse Burghul #3. I recommend everyone try this sometime! 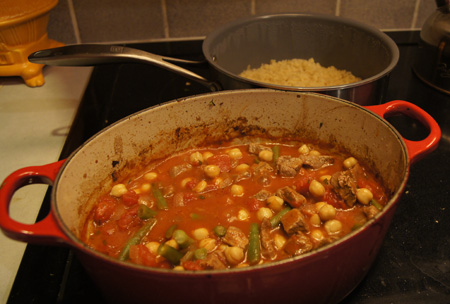 That’s the bulgur in the pan behind the stew. This stew was very good. I felt really healthy eating it – it’s low in fat and has lots of vegetables. Lamb is generally lower in fat than is beef. The lamb was good, and in fact, my husband didn’t even know it was lamb, he assumed it was beef.

I’ll keep the Nutrition Bible and I’ll make this lamb stew once in a while. Try it, it’s different!