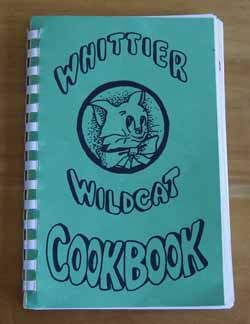 “I have no idea where this book came from” reads my cookbook database. Nowhere in this book is a publication date. It is a “community cookbook” –  compiled by the teachers, parents and students at an elementary school. (Here is the first community cookbook covered in this blog.) The introductory page thanks “Mary West-Smith” for typing all of the recipes on her word processor, so my guess is that it was produced in the mid-1970s.

“Whittier” at first calls to mind the city in Southern California. But no . . . “Whittier” is also an elementary school in Boulder, Colorado. A school on Pine and 20th.

Well, this all is starting to make sense. We lived in a dumpy old house on Walnut, full of character (and characters), for a couple years in the mid-1970s. We called the house “Walnetto”. What times. The Whittier school was just a couple blocks from Walnetto. Perhaps a child or parent was going door-to-door with this cookbook and I bought it from them? Quite likely.

And yes I googled this book. I found a couple references that confirm it was published in Boulder, Colorado – and the publication date is unknown. I could purchase it through AbeBooks.com for $22.90 (!).

Time to settle in and read. The recipes? Pretty good. Good homey main dishes for families (Pot Roast Breckenridge and Stayabed Stew). Salads for potlucks (7-Up Salad and Coco-Cola Salad). Breads and cakes and cookies and pies (Dump Cake and Turtle Cake and Monkey-Face Cookies). Many look so familiar they could have been in my own mother’s recipe box. Some are treasured family recipes: 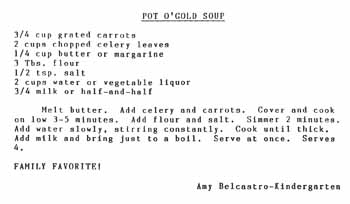 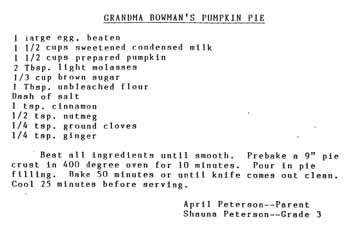 Some are international recipes: 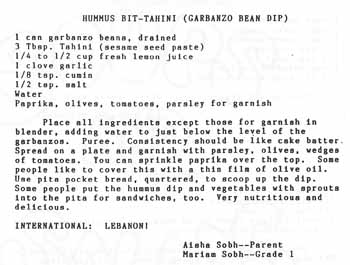 And special treats! Little kids contributed some of the drawings and recipes. 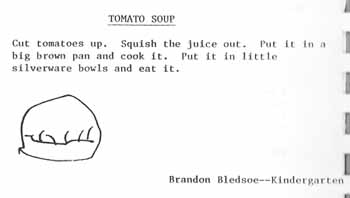 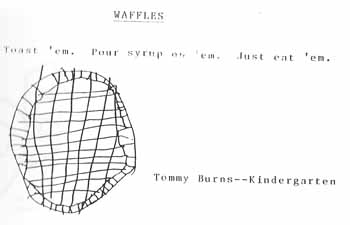 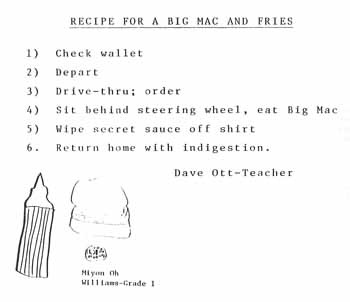 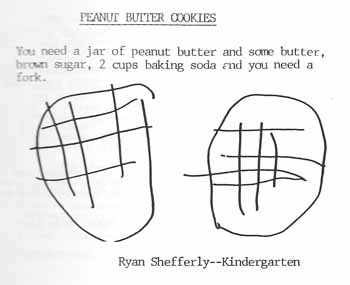 I am going to make a Mexican chicken casserole for this blog. The cookbook has two similar recipes: 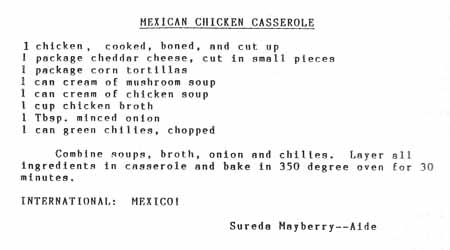 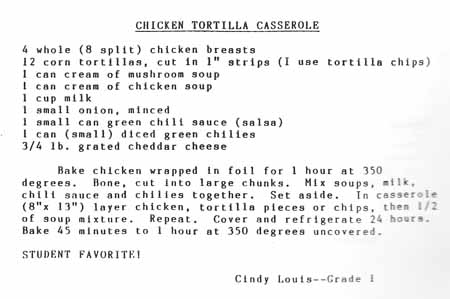 (I also have a recipe for this casserole in my own collection – but I decide not to look at it until I am done cooking a Wildcat one.)

Below is a combined version of the Whittier Wildcats recipes, with a couple small modifications of my own.

Note: This casserole is a good way to use up leftover cooked chicken, but if you don’t have any around, cook one large boneless chicken breast for this recipe.

Mix the chicken with the garlic and some chopped cilantro and a little kosher salt and rub it all together. (This step is optional, but adds a good zip of flavor.)

Mix the cream of chicken soup with the chicken broth.

Put a little of the chicken in the bottom of an 8×8-inch baking pan. Layer with half of the tortillas. I cut the tortillas in half and layered them like this: 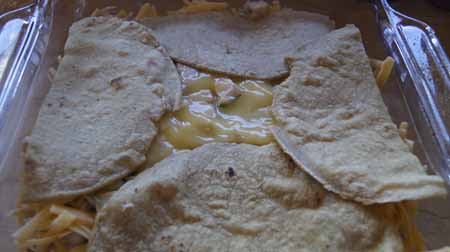 (I put another piece of tortilla to fill in the hole in the middle but I wanted to illustrate my method.)

Add another layer of tortillas, then top with the remaining ingredients. Put a little cilantro on top for flavor and color (if you like cilantro). 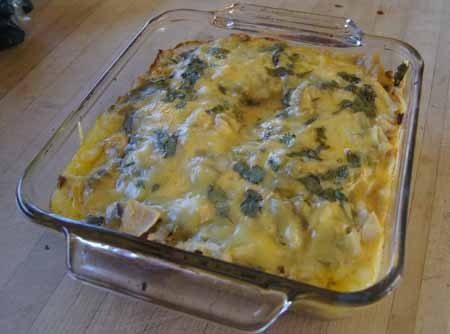 This was a huge success. The garlic, cumin and cilantro perked up the original recipe(s) but did not overwhelm the dish. I baked for 30 minutes, but it wasn’t hot in the center yet, so I modified cooking time to 45 minutes.

Now it’s time to look at my own version of this recipe. Turns out I have two: one pretty much like the Whittier versions, except it adds chopped green pepper and a can of “Rotel” tomatoes with chiles; one calls for the addition of garlic, cumin, chile powder, and canned red enchilada sauce.

Which recipe do we like best? I think this new version without any red sauce at all!