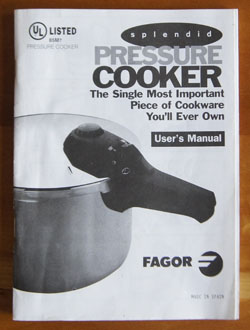 This is the instruction manual that came with the pressure cooker I bought sometime in the early 2000s. I have already talked about that specific pressure cooker in my post Fagor Pressure Cookers, More than 50 Recipes.

The first few pages detail how to use a stove-top pressure cooker and how long to cook a variety of foods. I now use an electric pressure cooker, so only the cooking time lengths and pressure release times are useful to me. For instance, the length of time to cook chicken is discussed in this section: 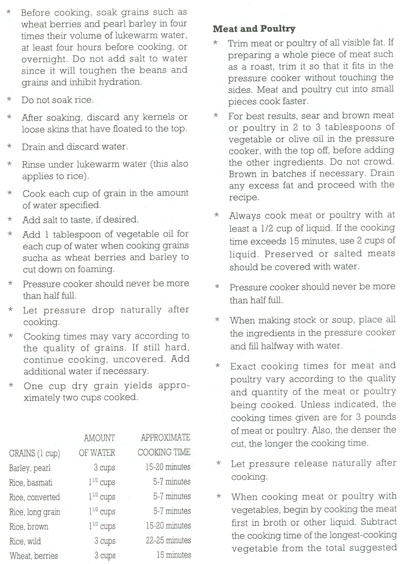 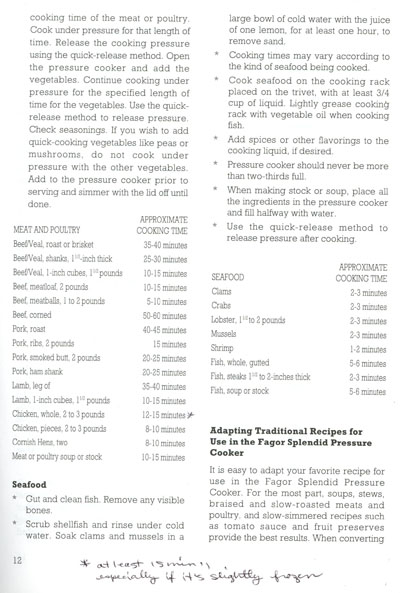 I’ve used this booklet – that note is in my handwriting. The cooking times for chicken correlate well with the times in my current electric cooker instruction booklet (Cuisinart Electric Pressure Cooker).

How about the recipes in this booklet? Good recipes might make me keep an instruction cookbook. But Pressure Cooker, User’s Manual, has only 8 pages of recipes, from soups to vegetables to rice and pastas to game and poultry to meat to fish to desserts. The recipes are basic preparations, none have a much flair. Instead, their purpose is to acquaint the new user with the range of foods that can be cooked in a pressure cooker. Here is a typical recipe: 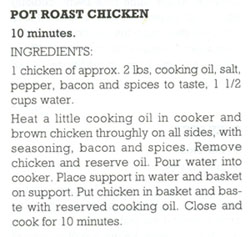 I don’t need this booklet anymore, since I no longer have a stove-top pressure cooker and since the recipes aren’t very exciting. I will recycle it.

For this blog I will cook chicken in my current electric pressure cooker. I go to Whole Foods to buy a whole chicken, but they are out! This is the day after Christmas and many shelves are bare. Not wanting to travel to another store, I buy bone-in chicken breasts and drumsticks, about 4 pounds worth. Do I need to cook chicken pieces for a shorter time than a whole chicken? According to to the section on Meats and Poultry in Pressure Cooker, User’s Manual (above), the answer is “yes” – 9-10 minutes for pieces, 12-15 for whole. (The chicken-piece cooking time length correlates well with my Savory Chicken recipe.) How much liquid should I add to the pot? Pressure Cooker, User’s Manual states “Always cook meat or poultry with at least a 1/2 cup of liquid. If the cooking time exceeds 15 minutes, use 2 cups of liquid.”

At 8 minutes, the drumsticks were done, but the breasts were kind of “hard”. I took the drumsticks out of the cooker and cooked the chicken breasts 5 minutes longer. Here is my chicken at 13 minutes: 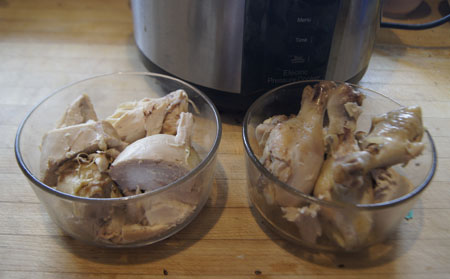 All the chicken pieces are done, but honestly, the breasts were kind of rubbery and dry. Hmmm. I poured the cooking liquid into a measuring cup – it totalled 1 cup. It seems a lot of the juices ran out of the chicken. In the future, I recommend trying more water in the pot at the start, up to 2 cups.

This chicken did make a great chicken salad. Cut up and dressed with mayonnaise, it was just fine, and didn’t taste rubbery. It was also good in chicken soup (made with that cup of chicken liquid). And I have enough chicken for yet another meal too.

This is an experiment in progress! For large chicken breasts, I suggest trying (first) 1-2 cups water, and 12-15 minutes (quick release) cooking time for a whole chicken. If I have a whole chicken, I’d try 16-20 minutes.

I had a fun time with this – I still like doing experiments.