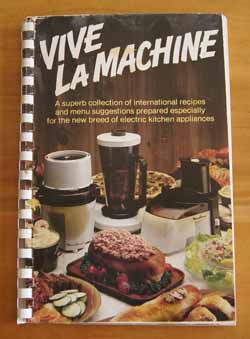 “A superb collection of international recipes and menu suggestions prepared especially for the new breed of electric kitchen appliances.”

And what is the “new breed” of kitchen appliances? Food processors: counter-top machines that shred, slice, chop, and puree foods. They became available for home cooks in the US sometime in the 1970s. I got my first one in the 80s. It was a “La Machine”. Hence I own this cookbook!

But alas, that old La Machine bit the dust. It did a pretty good job of shredding: I used it a lot to grate cheese, zucchini and carrots. The slicer worked okay but it was often easier to slice small amounts of vegetables with just a knife. You had to hold a bowl under the spitter-shute because the shredded/sliced foods came flying out. I liked the nice small bowl with a spinning blade for dicing vegetables and grinding meats. A drawback of the  La Machine was that it was hard to clean, since the dirty parts were not immersible.

But the big issue with my La Machine was the funky connection of the top to the bottom.  I had to buy new parts at least once. I eventually replaced it with a Cuisinart brand food processor.

I kind of like this Vive La Machine cookbook. The recipes rely on freshly grated and chopped foods, thus recipes are from-scratch and up my alley.

For this blog, I choose to make “Fudge Brownies”. 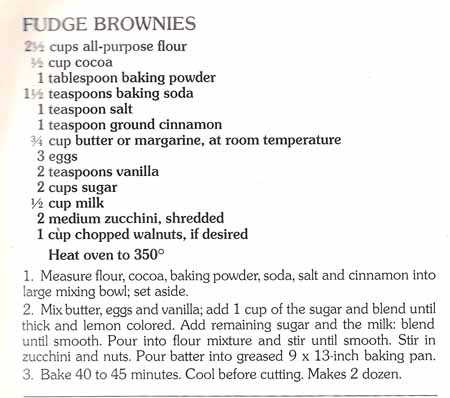 I am going to re-name these “Chocolate Zucchini Brownies”. They are chocolaty, but not really fudgy.

My version is below: I halved the recipe and made a couple small changes.

In a bowl, stir together the flour, cocoa, baking powder, baking soda, salt, and cinnamon. Set aside.

In a mixer, blend well the butter, eggs, vanilla, and sugar. Add the milk and mix in. Add the flour mixture and mix on low speed until smooth. Add the zucchini and nuts.

Pour into a greased (I used non-stick spray) 8-inch square baking pan. Bake at 350˚ for 35-45 minutes, or until it tests done with a toothpick. 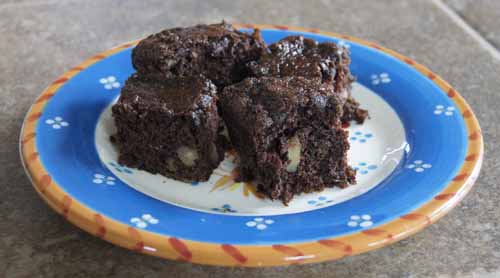 This recipe is a keeper! Yes I already have about a dozen great brownie recipes, but this one needs to be put in my repertoire. These are kind of light and fluffy and are especially moist. If no one told you zucchini was in them, I doubt you would guess. And the cinnamon – the cinnamon! It adds a . . . je ne sais quoi touch . . . never leave out the cinnamon.

These brownies fell just a little bit in the center of the pan. Since we live at 5400 feet, next time I will apply my high-altitude baking suggestions to see if it helps. Doesn’t matter a lot, these taste yummy!