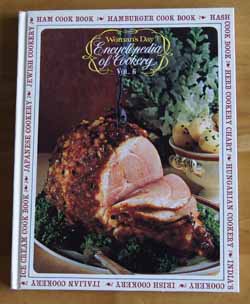 Cookbook number 125, halfway through my 250 Cookbooks! Coincidentally, I picked up this volume of Woman’s Day Encyclopedia of Cookery to do this week, and it’s Volume 6 of the 12 volume set – halfway through. Perfect for this week.

I tuck happily into this cookbook, remembering the unexpected treats I found in the first 5 Encyclopedias of Cookery. This one begins with haddock, hake, and halibut. Next is a “ham cook book”, then a “hamburger cook book”. My mother liked the chili meatballs in the hamburger cook book. Herbs – a great section that includes a several-page chart with drawings, descriptions, and culinary uses of over forty herbs, and a section on how to build your own herb garden.

Ice: a good read on the history of the household use of ice. Ice cream cookbook. India’s Cookery. Irish Cookery. Italian.

“Lokshen Kugl” in the Jewish Cookery section: This is my real find in this volume of Encyclopedia of Cookery. I’ve been looking for this recipe since college. From my previous post mentioning kugel: “Way back in college, a friend brought a traditional Jewish kugel to a party. It had noodles and was sweet: I had never had anything like it before and loved it. To this day, I have never made a sweet kugel for myself, but just the mention of ‘kugel’ gets pings of longing zooming around my brain.” In that crazy brain of mine, I thought the dish was named “luchen-kugel”. I googled but did not find any recipe similar to the kugel my friend brought to that long-ago party. Now I see “Lokshen Kugl” in this cookbook and know it is exactly what I was looking for. 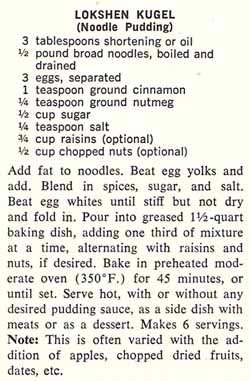 Back to the rest of the encyclopedia entries. Julienne, juniper berry, kabob (kebab), kale (pre-famous), ketchup, kid (as in the meat of a young goat slaughtered before being weaned).

Shall I make the Lokshen Kugl for this blog? Hmm, think I’ll wait for later, when I have someone other than my husband to share this discovery with. Instead, I decide to make “Hungarian Goulash” from the Hungarian Cookery section. Usually when I make a paprika-laden meat goulash, I start with a tender cut of meat like pork tenderloin or beef sirloin sliced very thin. I like my quick version so much that I added it to this blog as Pork with Paprika and Mushrooms. Now, I want to try the “Hungarian Goulash” recipe in this cookbook to compare and contrast a traditional recipe with my current one. Here is the original recipe: 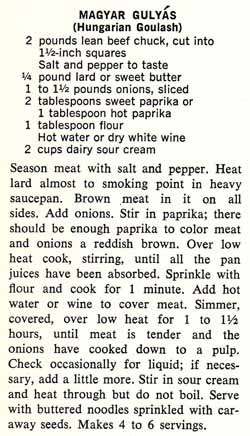 I bought two pounds of beef chuck and cut it into 1 1/2-inch cubes, trimming off the fat as I did so. And then, over a pound of onions! I would never use that many if I were doing this recipe-less. I weighed the sliced onions to get the proper amount and the pile of onions was about the same size as the pile of meat! The meat is browned in lard – and yes, I have some. I simmered the meat and onions and paprika for at least a couple hours. 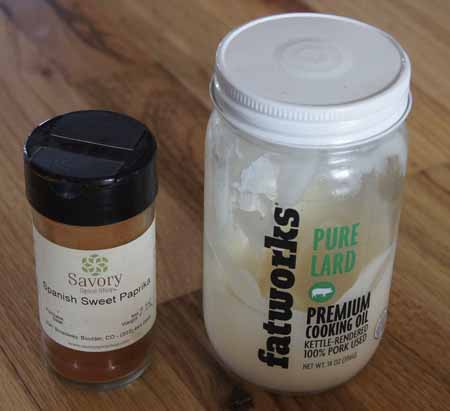 Below is my version of “Hungarian Goulash”. I’ll let you know if I like it as much as my quick version.

Sprinkle the meat with salt and pepper to taste. Heat the lard in a heavy pan of appropriate size, then add the meat and brown on all sides. Add the onions and cook just until the onions begin to wilt. Stir in the paprika – the meat and onions should be a reddish brown (so add more paprika if necessary). Cook and stir until most of the pan juices are absorbed or evaporated. Stir in the flour and cook a minute or two. Then, add water/wine to cover the meat (I used water).

Cover the pan and simmer over low heat for 1-2 hours. The onions will cook down to a “pulp” and the meat should become very tender. Check during the cooking time and add more liquid as necessary. ( kept my goulash at a fairly fast simmer and checked quite a few times; it took at least 2 hours for the meat to be tender and the onions pulpy.)

Stir in the sour cream and heat through but do not boil. Serve with noodles sprinkled with caraway seeds. 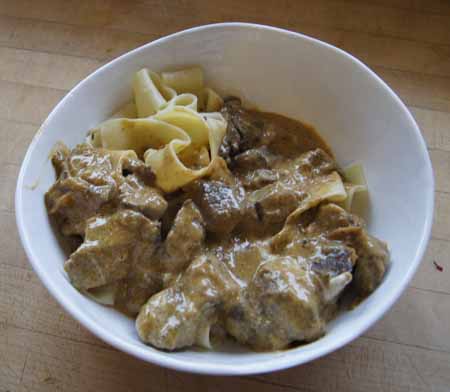 The sauce in this goulash is wonderful! The onions really were “melted” into it. I found the meat a little chewy, so next time I’d choose a better cut of meat (I used beef chuck and it was pretty fatty) or I would cut the meat into smaller chunks (I did 1 1/2-inch pieces). (I included these changes in my version of the recipe, above.) The caraway seeds mixed into the noodles were a great touch.

Do I like it better than my quick version? Not really, but I like it equally as much. The sauce and the meat have better flavor, but the beef was a bit tough and the goulash took a long time on the stove. This would work well in a crock pot or a pressure cooker, or, save it for a long and chilly winter day when you want the aromas of a great stew wafting from your kitchen for hours.

Note: This is the sixth in a series of 12 food encyclopedia volumes. I discussed the first five volumes here: Volume 1, Volume 2,  Volume 3, Volume 4. aand Volume 5.