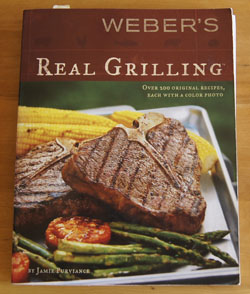 Ages ago we had a covered Weber charcoal grill, then changed to a gas grill at some point in time. Today I consider a gas grill an essential component of my cooking equipment, summer, fall, winter, and spring!

I got Weber’s Real Grilling about six years ago, when we purchased our current Weber gas grill. I use this book a lot! It sort of flops open to “Basic Baby Back Ribs”, where I have several post-its pressed into place.

I highly recommend this cookbook. It taught me how to cook over direct and indirect heat on a gas grill, and how to set the temperature of the grill. If I want to know about rubs, or BBQ sauces, I go to this book first. If I want to know how long to cook a cut of meat, poultry, or fish, I go to this book first. The recipe chapters are: red meat, pork, poultry, fish, veggies and sides, and desserts. Each recipe has an accompanying photo that makes this amateur photographer envious!

The recipes offer a variety of seasonings: Rib-Eye Steaks with Tomato Harissa, Flatiron Steaks with Little Italy Relish, Sweet Chili-Mustard Chicken Salad with Toasted Almonds, Smoked Pulled Pork in Hot Chile Sauce, and Soft Tacos with Halibut, Guacamole, and South American Slaw are some examples. A fun range of ingredients and lots of fresh herbs and vegetables – I can always find a recipe to try in this book!

In September 2013 we were “stranded” at our home northwest of Lyons by a 500-year flood. Rushing water covered our only drivable way to civilization. Our power was out for a week in our all-electric home. We had no landline service. No cell phone reception. I am a packrat, so we had plenty of food, but how to cook? The Weber grill! That’s when I pulled out Weber’s Real Grilling and learned how to grill pizzas. They were wonderful!

For this blog I choose to make “Greek Chicken Salad Sandwiches”. 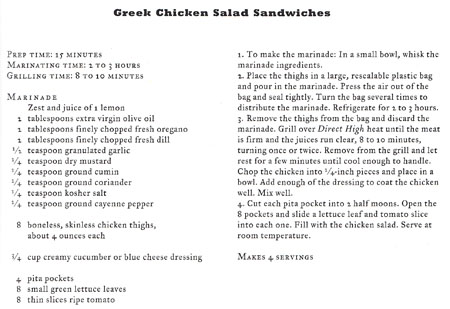 I like the seasoning mix for the marinade, and I like using chicken thighs sometimes instead of chicken breasts. Ever since our trip to Turkey, I’ve especially enjoyed Mediterranean-style food. Plus: pitas! It’s been ages since I’ve bought (or made) pita bread. For the “creamy cucumber or blue cheese dressing”, I will substitute a cucumber dressing that I have in my own cooking documents.

Whisk together the marinade ingredients (lemon though the spices). Place the chicken thighs in a plastic bag and pour in the marinade. Close the bag and refrigerate 2-3 hours.

Combine the cucumber dressing ingredients and set aside.

Remove the thighs from the bag and discard the marinade. Grill over direct high heat until the meat is firm, 8-10 minutes, turning once or twice. Remove from the grill, and when cool enough to handle, chop the chicken into small pieces. Combine with enough of the dressing to coat the chicken and mix well.

Cut the pita breads in half. Open each half and fill with the chicken mixture, lettuce, and tomatoes and serve.

My cucumber dressing, pita pockets, marinated chicken, and the veggies: 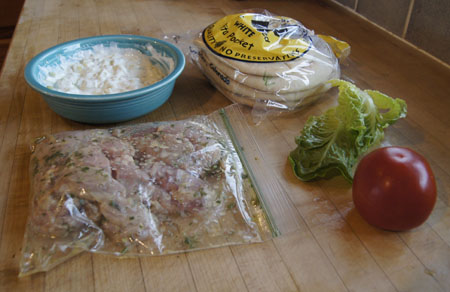 Here is an assembled sandwich 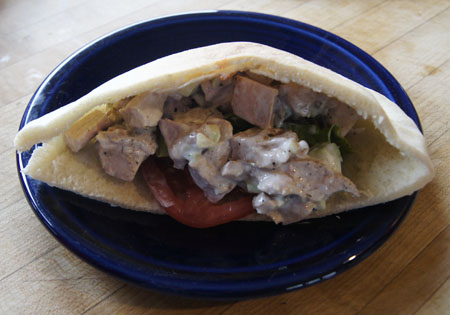 We both enjoyed these! The chicken in nicely seasoned and well complimented by the cucumber dressing. We had them for dinner on a hot summer day, but they’d be good for lunch too.

I’ve made chicken salad for sandwiches before, zillions of times. Usually I use boiled chicken. Marinating and grilling the chicken – for chicken salad? A great idea. Putting the salad in pita bread? Another great idea. Next time, I’ll probably cook the chicken ahead of time, since they are served at room temperature. 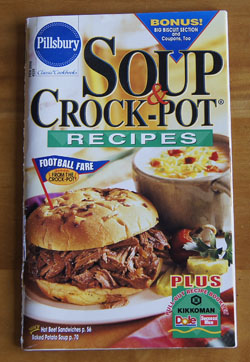 This is one of the series of “Classic Pillsbury Cookbooks” – I discussed their history in a previous post.

So I turned to the “Hearty Crock-Pot Meals” chapter with some trepidation. Will I be able to find something to cook from this book? To my pleasant surprise, the recipes in this chapter are more up my line of cooking. I jot down “Jerked Chicken Sandwiches” and “Hot Beef Sandwiches au Jus” to try. Between chapters, I find a recipe I like for a yeast bread called “Wild Rice Batter Bread”.

The “Slow-Simmering Soups” chapter yields a couple more recipes. I note “Pork and Tortellini Soup” (because I often find pork loin on sale and tortellinis are good) and “Chicken Soup with Cornbread Dumplings” (because I love dumplings and it uses leftover chicken). Finally, “Roasted Vegetable Soup” looks interesting – you roast zucchini, onions, red bell pepper, whole mushrooms, and garlic in the oven, then add them to a broth and cream mixture for a short time on the stove top. Might not get this soup past my meat-eating husband, but us girls would probably like it.

Will I keep this cookbook? No, I will recycle it. But first I will scan in the recipes I want to try. For this blog, I will make the “Jerked Chicken Sandwiches”. 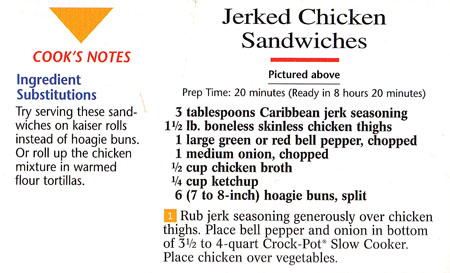 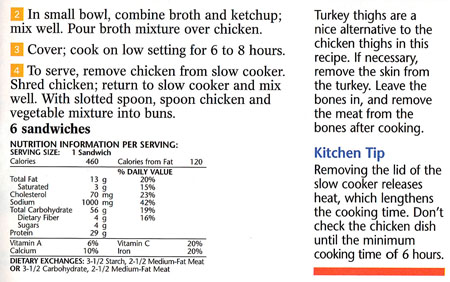 It’s a crock pot recipe, but I plan to simmer the jerked chicken on the stove top instead. For the rolls, I will make my own from a King Arthur Flour recipe.

Jerk seasoning is usually easy to find in a market, and often it is called “Jamaican” rather than “Caribbean” jerk seasoning. Each brand will vary, but most are made from a combination of hot pepper, onion and garlic powders, and the spices cinnamon, nutmeg, and allspice. You can make your own jerk seasoning too – just search online. In my own spice cabinet I found the two jerk seasoning jars in the photo below. I combined them to get 3 tablespoons, finishing one jar in the process. 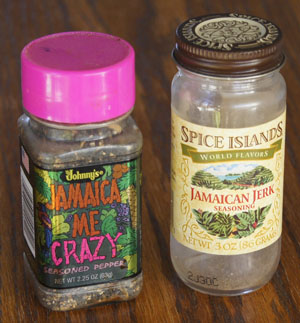 Rub the jerk seasoning into the chicken thighs.

Put the peppers and onion in a large pot (for stove top cooking) or in a slow cooker. Add the chicken thighs, broth, and ketchup. Mix.

If you are cooking on the stove top, simmer about 2 hours, or until the chicken is tender. In a slow cooker, cook 6-8 hours on the low setting.

Remove the chicken pieces from the cooking pot, shred them, then put them back in the pot.

Slice the sandwich rolls in half. Spread mustard on the rolls if you wish. Remove the jerked chicken mixture with a slotted spoon (too much of the liquid can soak the rolls) and pile it high on each sandwich. Garnish as desired, and serve!

These were a hit. I took the photo before I added the garnishes. The lettuce-tomato-onion was a last minute idea on my part, and it was a great idea – these sandwiches were delicious! Hubbie added mustard to his second sandwich. Yes, he went back for seconds. That’s why I give a thumbs up for this recipe.

The pablanos were a good idea too. They are flavorful and just a bit spicy hot. You could go hotter with fresh green chiles or even jalapenos.

My homemade rolls were great. Really great! Soft but tough enough to hold together, not too tall, not too flat, had a delicious flavor . . . these may just become a standby in my kitchen repertoire. I baked two of the rolls in a baguette pan and one on parchment and found that the parchment method worked best.

Note: This jerked chicken recipe would adapt well to an electric pressure cooker. Also, you could double the batch and freeze leftovers for later quick meals. 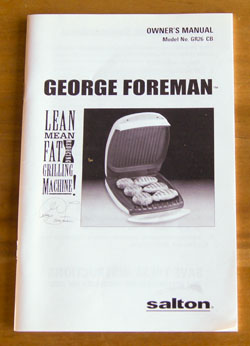 This is the instruction booklet for my George Forman “grilling machine”. I re-discovered this appliance in another blog post: George Foreman Lean Mean Fat Reducing Grilling Machine Cookbook. There is a just a handful of recipes in this instruction booklet. But, since it has instructions ffor the grill’s use (including a cooking chart), I will keep it as a reference.

I decide to try “Mustard Lemon Chicken Breasts” for this blog. 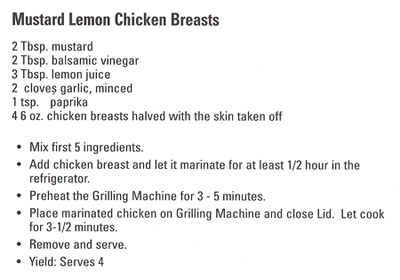 These are really simple! If they work, should be nice for a quick meal.

Preheat a Foreman Grill for 5 minutes. Place the marinated chicken on the grill and close the lid. Let cook for 3-4 minutes. (Thick chicken breasts will take a little longer.) 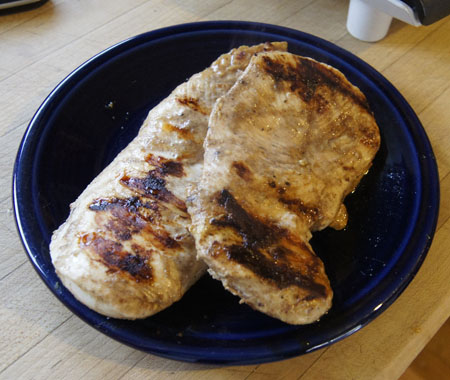 I liked these. I put them inside toasted french rolls and added jack cheese, tomatoes, sliced red onion, lettuce and avocado. The chicken was so tasty on its own that I didn’t bother adding mustard or mayonnaise to the rolls. Once again, I am reminded to keep using my Forman Grill! 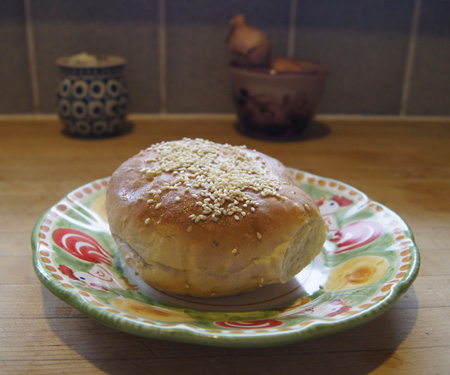 I make my own hamburger buns. I’ve finally settled on a recipe that consistently yields what I consider the “perfect” bun: just the right size, texture, and taste. These are great for burgers and all sorts of cold and hot sandwiches.

I was wondering what to do with the leftover meat from my Cookbook #2 recipe, Colorado Chuck Steak on the Grill. I should make barbecue beef sandwiches! And they would be best on homemade hamburger buns, and thus I thought I’d share my burger bun recipe.

To make the sandwiches, just chop the leftover meat into small chunks, then lay on the sliced burger buns with some barbecue sauce – your own, or bottled – and onions, pickles, and any other condiments you favor.)

My burger bun recipe is essentially from the King Arthur Flour website (accessed 2012), although I did make a few changes. But I always use King Arthur Flours; they are available at both regular and natural foods markets in my area.

I like to use a bun or muffin-top pan to bake the buns. This helps in a couple ways: it makes me flatten the dough to the proper size, and it gives the bottom of the buns a little rim around the edge. Before I had this pan, my burger buns turned out too high. I don’t like buying special-purpose cookware, but I made a rare exception in this case.

I always use a breadmaker to knead and rise the dough. You can knead it by hand and let it rise until double before forming rolls, if that is your preference.

Mix in all ingredients breadmaker on dough cycle. When the cycle is complete, form into 6 buns. Make them pretty flat, because they poof up a lot as they rise and bake. You want them 4 inches in diameter before you let them rise. Use a bun pan if you have one.

Let rise until double, then bake at 375˚ for 10 minutes. Take out and brush the tops with a beaten egg (or egg white or use egg substitute), and sprinkle with sesame seeds (or other seeds). Return to oven and bake 5-8 min more, until golden brown. Take off the pan soon or the egg glaze can cause the buns to stick to the pan.

These can form big pockets, kind of like pita bread, especially if you use a high-gluten flour. I don’t think this matters. They are soft and make great sandwiches, not only for hamburgers.